Judy New Movie Quotes – ‘I just want what everybody wants.’ 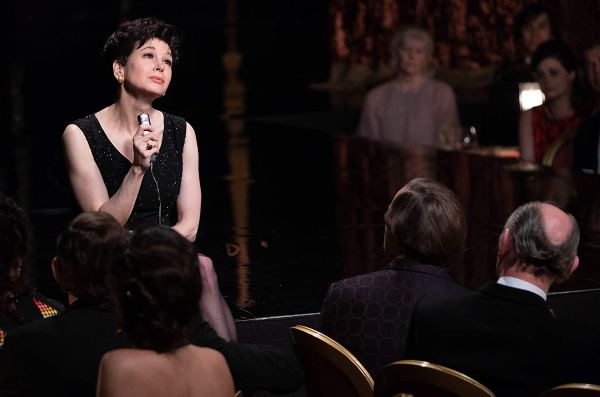 Bio-musical drama directed by Rupert Goold based on the life of American singer and actress Judy Garland (Renée Zellweger). The story focuses on the late 1960s as Judy Garland arrives in London to perform. It is 30 years since she shot to global stardom, but if her voice has weakened, its dramatic intensity has only grown. As she prepares for the show, battles with management, charms musicians and reminisces with friends and adoring fans, her wit and warmth shine through. Even her dreams of romance seem undimmed as she embarks on a courtship with Mickey Deans (Finn Wittrock), her soon-to-be fifth husband. After working for most of her life, she is exhausted, haunted by memories of a childhood lost to Hollywood, and gripped by a desire to be back home with her kids.

[as Judy is about to take some pills]
Lorna Luft: Mama, please don’t go to sleep now.
Judy Garland: No, no, no, these are the other ones.

Mickey Deans: We can’t have the world’s greatest entertainer out here without a drink.
Judy Garland: Frank Sinatra’s here?
Mickey Deans: Frank is great, but he is no Judy Garland.

Judy Garland: I don’t have a home. I can’t even get a manager.
Ken Frisch: London would offer you a lot of money.
Judy Garland: You’re saying, I have to leave my children if I want to make enough money to be with my children?

Mickey Deans: [to Judy] Talk of the Town is desperate to do a deal with you.

[hugging her children]
Judy Garland: I would very much like to stay.

Sidney Luft: The kids need a home, Judy.
Judy Garland: I know what kids need. They need their mother.

[as Judy’s on stage]
Audience Heckler: You’re late!
Judy Garland: So what? Do you have to be home for your mommy to put you to bed?

Rosalyn Wilder: You’re going to be alright.
Judy Garland: What if I can’t do it again?

Doctor: [to Judy] You need to take better care of yourself. You understand?

Doctor: Do you take anything for depression?
Judy Garland: Four husbands. It didn’t work.

Judy Garland: Everybody has their trouble, and I’ve had mine. I just want what everybody wants. I just seem to have a harder time getting it.

[to the audience]
Judy Garland: You won’t forget me, will you? Promise you won’t.

What do you think of Judy quotes? Let us know what you think in the comments below as we’d love to know.