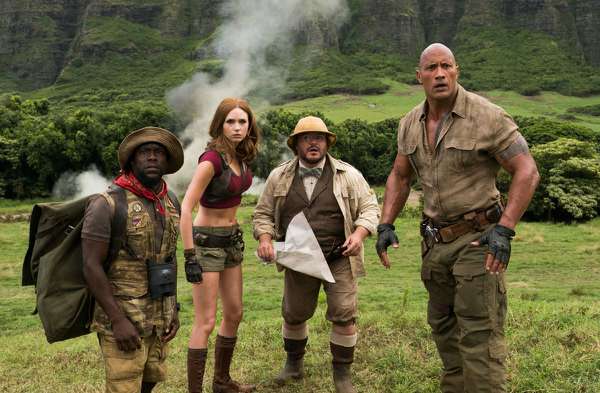 Big meets The Breakfast Club meets an awesome ass movie about getting out of the jungle with newly found powers alive!

I don’t know who screwed up and accidently made this movie extremely watchable, but someone dropped the ball big time. It’s a sequel/reboot of a Robin Williams board game movie, starring The Rock, Jack Black and Kevin Hart. We all knew the score. So, I ask you – which: only got the job because their dad is a producer; over achieving; still believes in the magic of cinema, bastard!, didn’t get the memo that this was a simple cash grab, and decided to lay it on the line and make something worth seeing instead?!

This movie wasn’t revolutionary. It didn’t change the course of cinema or alter my perspective on reality. Instead it did the one thing I hope for every time I sit down for a movie in this genre – It entertained. For the two hours I sat looking at the screen, it didn’t matter who the president was or wasn’t. it didn’t matter what pronoun you should refer to me as. It didn’t matter how much my allergies were acting up, or how big of a douche my boss is. For two hours on a Thursday, thanks to this movie, I was just simply enjoying the ride.

Look I’m not claiming this was highbrow shit. A football stud named Fridge morphed into Kevin Hart. A shallow Instagram selfie obsessed blonde transformed into Jack Black… I get it. I’d probably fire the guy who pitched me that. But they make it work. The casting was surprisingly perfect. Black fell off my radar about a decade ago and Hart hasn’t made a good film in his career, so that teamed with the fact that The Rock will sign on to do anything didn’t have me coming in expecting much, but they all delivered career affirming performances and reminded me why I fell in love with the movies to begin with.

There were some bum notes. The four high schoolers were a little stereotypical and not well rounded, and the videogame girl was dressed like a videogame girl. But honestly, I had precisely zero problem with any of that. It was funny and silly and one of the first films in a long time that I can dub “fun for the whole family” without secretly meaning ‘if you’re not a kid or a grandparent, bring a flask.’ Plus, the lack of character depth made it all the more powerful when it took them becoming archetypical videogame characters to truly figure out who they were as people and what they were individually about.

They knew exactly what they had with this set up. By putting the characters in a videogame, they were able to forego a lot of the story structure red tape that tends to bog down movies like this. Clunky exposition scenes became fun, and to the point. Because each character had attributes that were clearly stated from the beginning, the world and rules were set from the get go and we just got to enjoy how they used the bag of tools to get from A to B. And since each team member was a piece of the puzzle, we didn’t have to worry about that obligatory sequence that makes its way into every similar film where the characters have a big falling out and go their separate ways for 15 minutes to pout in a puddle somewhere. Instead, they just kept the train moving and never looked back.

This movie could have been made without any ties to the Jumanji world and not many would have been the wiser, and because of that, new audiences, ignorant of the original, can watch this and feel as though they’ve missed nothing. At the same time, they tied in some fun nods to the 1995 film that made fan boys like me feel like we got just a little more bang for our buck. I would have felt a lot less bad for Alan Parrish all those years ago about the dice never coming up 5 or 8 if I knew being stuck in the jungle was this much fun!