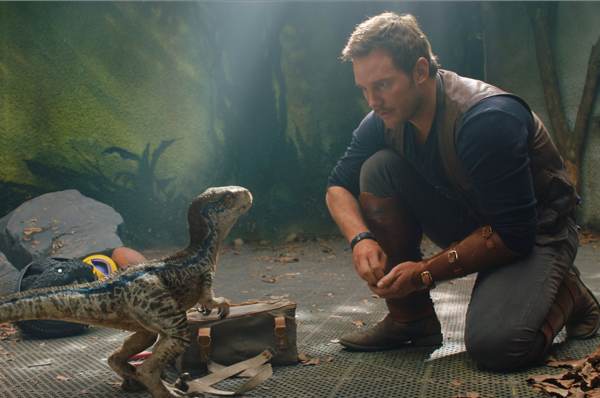 The fifth film in the dinosaur franchise, and by far the worst one. I should say that at a point during the film, I regretted wasting my money on it. But before I go on to why and how, let’s get to the plot.

Set a few years after the 2015 film, the dinosaurs are now endangered creatures with the dormant volcano on Isla Nublar becoming active, threatening their existence. Claire Dearing (played by Bryce Dallas Howard from the first film) is now a dinosaur rights activists trying to save the creatures from extinction. The government takes a decision to not to save the dinosaurs, as they consider it nature’s correction for man made mistakes. But secretly someone tries to save the dinosaurs and desires Claire’s and Owen Grady’s (played by Chris Pratt) help to do so. And as is the tradition he double crosses them by selling them out in an auction.

That’s it. Straight and simple. Frankly speaking, I never really expected much from it after the release of the first trailer. There are many downsides to the movie which include a poorly written plot and even more poorly executed idea. The movie has nothing much to offer in terms of plot. And neither in terrific horror scenes from the franchise. Apart from the opening sequence, no other action sequence or dinosaur horror scenes are good. It becomes so damn predictable. So predictable that the whole of second half’s later half, that is last 30 minutes or so of the movie, which totally relies on the same clichéd action sequences involving genetically created dinosaurs is boring beyond limit. There are some more clichés involved over here. The plot of the movie closely relates to the plot of the second movie The Lost World Jurassic Park. And that of 2015 resembles the plot of the first movie.

This film lacks a proper execution and also a real idea. Few scenes are just copy pasted from the original trilogy. Performance of the actors is really funny because this is a plot with no scope for performance.

Chris Pratt who was actually very good in the 2015 film, seemed a little off this time and was unable to impress us with his presence. Same is the case with Bryce Howard, who did pretty well in the previous film, but could not make a point. Out of nowhere do we see Jeff Goldblum as Ian Malcolm in hearing sessions trying his luck to convince the government not to save the dinosaurs.

This film has pretty good graphics and eerie BGM. The dinosaurs did look well on the screen and the cinematography was very good. The music given by Michael Giacchino is ok but seems to be ripped off from the previous films at times. Overall this film has too many negative points that cannot be covered up by the little positive side.

Sit this one down and enjoy your weekend at home with family. Do not waste your money unless the kids throw a rant to watch it.