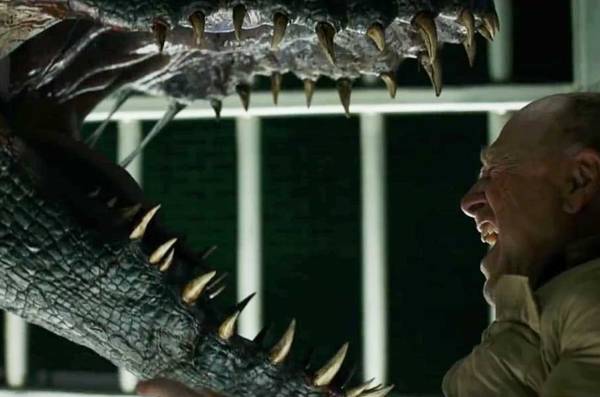 The following will probably read as more of a reaction/ramble than a review because dinosaurs occupy an important place in my heart, and I cling to any bit of dino related media I come across. The good news? Jurassic World: Fallen Kingdom still involves dinosaurs. The bad? The dinosaurs take a backseat to Chris Pratt and really, really bad writing.

What made the first Jurassic World work at all was the fact that dinosaurs held the focus of the film, start to finish, albeit with the genetic amalgam the ‘indominus rex’ occupying most of the spotlight. Jurassic World was no masterpiece, but it did what it set out to do – entertain. Heading into JW2, there were few expectations for an overall quality upgrade, but as a fan of entertainment and an even bigger fan of extinct reptiles, I cautiously hoped for a wider variety of species thrown into a wider variety of situations. What we have instead is the wrong kind of fan service strewn through a convoluted, ridiculous plot, culminating in a sprawling, unimaginative third act.

Last time, we were introduced to a new-and-visually-improved Jurassic Park, in which heartless corporate minion Claire Dearing (Bryce Dallas Howard) schemed to boost park revenue with a new attraction: a large, intelligent hybrid carnivore. This time around, there’s another hybrid superpredator, only…smaller. Less threatening. And it doesn’t come in until the end. But let’s not get ahead of ourselves; before the ‘indoraptor’ makes its underwhelming entrance, we have an hour of what should have and could have been pure action/adventure.

Claire is back, suddenly full-to-bursting with compassion for the dinosaurs stranded in the wreck of Jurassic World on the legendary Isla Nublar. A dormant volcano has become active on the island and threatens a second extinction for the park’s inhabitants, leading Claire to accept a team-up offer from obvious bad guy Eli Mills (Rafe Spall). Mills is particularly interested in “rescuing” Blue, an unusually smart velociraptor, and one of the stars of the last film, for whom he no doubt has dastardly devious plans (yawn). Naturally, Claire reenlists the help of Blue’s ex-trainer Owen Grady (Chris Pratt), who takes a break from building a log cabin, drinking beers, and playing pool (as if riding a motorcycle through the jungle with a pack of velociraptors hadn’t already cemented his ‘manliest man’ title) to track down their pointy-toed friend. The mission begins despite a cautionary speech on TV by our favorite chaotician Ian Malcom (Jeff Goldblum) during a predictably yet disappointingly brief cameo.

Yes, this all sounds like it has potential. But wait, there’s more. What’s an expedition without annoying character archetypes to fill out the team? Enter Franklin Webb (Justice Smith) and Zia Rodriguez (Daniella Pineda). The former is terrified of all things cool and would rather stay at home. Luckily, he’s a tech wizard, and figures out all the Unix systems of 2018 for the squad. The latter is a paleoveterinarian (dino doctor), which is, in theory, quite cool. She is also unfortunately the Hollywood blockbuster’s “strong woman” stereotype, and as is custom, Pineda endures some of the film’s worst writing. Poor writing for a strong female character undermines any and all good intentions and works backwards, turning the very concept into something silly and cartoonish.

These two worthless characters help muddle an already viciously inconsistent tone for the film, sometimes littered with comedic misfires and ChrisPrattisms and the next moment attempting to discuss dark and complex ideas about the future of the human species. Scenes with potential emotional impact are few and far between, but when they do appear, such as one heartbreaking shot of a dino death at the end of the second act, the transition from stupid humor is jarring and distracting from otherwise solid material.

After a lot of explosions and unrealistically slow running, the bad guys capture most of the dinosaurs, to be brought back home for auction (to sell to other bad guys). Here, with an hour or so to go, somehow, a dinosaur blockbuster begins to drag. The indoraptor is unimpressive, and the other half of the spotlight is occupied by Chris Pratt punching people. Dozens of dinosaurs are crammed into one location, and all Fallen Kingdom can come up with is…Chris Pratt punching people. The final battles are dull at best and often borderline cringeworthy, and yet another shoehorned character, bad guy’s ward and young dino-nerd, Maisie (Isabella Sermon), takes up screen space that longs to be filled with more claws and tails.

Though they appear throughout, almost the entire film feels as though it has a considerable dino shortage. Rather than a constant, looming presence and an unpredictable danger, the dinos in JW2 are big, scaly plot devices serving only to further the adventures of Hollywood darling Chris Pratt. Even Jurassic Park III, the ugly stepchild of the series, got this part of the winning formula right – the dinosaurs steer the narrative and the humans react accordingly. Dr. Grant (Sam Neill) was my hero as a kid, but my toybox was full of plastic dinosaurs, not paleontologists. Herein lies the issue of the wrong kind of fan service, with the worst offense being done to the popular T. rex. What is her role in this film?

The rex shows up for very brief, pointless bits during which she mostly acts illogically, helping Pratt and the gang out of a jam or just roaring real loud for the camera. JW2 needed either to give the familiar dinosaurs a real purpose or unleash a horde of new dinos to keep the humans busy and give the fan favorites clever cameos. Instead, new dinos are mostly seen in the background and the T. rex shows up repeatedly to do absolutely nothing. Jurassic World pulled it off – the indominus rex drove the plot and a smart, believable appearance by our beloved Tyrannosaurus in the third act drew cheers in the theater. The three words “open Paddock Nine” made up for two hours of mediocre writing and gave this dino fan his fix of goosebumps and nostalgia he so desperately desired. The fact that Fallen Kingdom fails where its predecessor exceled does not bode well for the inevitable next installment. Chris Pratt is great, but we’re talking about DINOSAURS, here. Sit down, Star-Lord.

There are still some good things about Fallen Kingdom, if one squints hard enough. The CGI dinosaurs are for the most part perfectly done, and, in their few appearances, the animatronics look as real as ever.

The film opens with a fantastically tense sequence involving the mosasaur (big swimming reptile) from JW. Naturally, this scene is never followed up on.

Some variety in dino species is refreshing, specifically in two scenes dedicated to a baryonyx and a pachycephalosaurus, (for the dino fans) respectively. Unfortunately, the few additional new dinos (including my childhood favorite, allosaurus) make such brief and forced appearances that their intended role seems to be to provide a wider variety of potential toy production and to fill in empty space in the recently released theme park simulator, Jurassic World Evolution. Both are good causes, but it would have been nice to get a few more surprises, as the baryonyx and pachy scenes are some of the best in the film.

JW2 is a swing and a miss, in my book, but Dr. Malcom’s haunting harbinger of a monologue that hangs over the film is intriguing enough that I’m very interested to see where JW3 takes the franchise. Yet again, there is enormous potential here. Fallen Kingdom is a bit of a dud, but the dino-blockbuster can afford some strikes before it goes extinct.