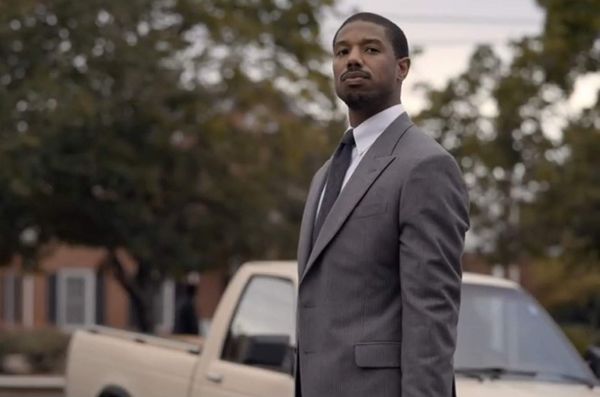 Bio-drama directed by Destin Daniel Cretton. Based on the true story of civil rights defense attorney Bryan Stevenson (Michael B. Jordan) as he recounts his experiences and details the case of a condemned death row prisoner, Walter McMillian (Jamie Foxx), whom he fought to free, as he becomes embroiled in a labyrinth of legal and political maneuverings and overt and unabashed racism, with the odds and the system stacked against them.

[referring to Walter]
Bryan Stevenson: They convicted an innocent man.

[visiting Walter in prison]
Bryan Stevenson: Tell me everything that happened.

Bryan Stevenson: The first time I visited death row, I wasn’t expecting to meet somebody the same age as me, from a neighborhood just like ours. It could have been, mama.
Brenda: Look, what you’re doing is going to make a lot of people upset.
Bryan Stevenson: But you always taught me to fight for the people who need the help most.

Walter McMillian: You don’t know what it is down here. They ain’t got to have no evidence.

Eva Ansley: [to Bryan] I was just about to give up, when I got a call from a Harvard lawyer looking to start a legal center for inmates on death row. I was in before you even offered me the job.

Eva Ansley: I don’t want my son growing up knowing his mom stopped doing what was right because she was scared.

Minnie McMillian: You the lawyer?
Bryan Stevenson: Yes, ma’am.
[she embraces Bryan]
Minnie McMillian: Thank you so much for driving all the way out here. Most lawyers barely make time to call.

Bryan Stevenson: How many were you with Walter that morning?
[most of his friends and family raise their hands]

[referring to Walter]
Bryan Stevenson: I think we could build a case strong enough to bring him home, and I’m not going to stop until I’ve done that.

Tommy Champan: [to Bryan] You know, digging in those wounds, you’re going to be making a lot of people very unhappy.

Ralph Myers: When people care about a thing that much, they’ll do anything to get what they want.

Eva Ansley: [to Bryan] When I first learned about all of this, it was like looking at a river full of drowning people, and not having any way of helping them.

Walter McMillian: Are you going to quit this?
Bryan Stevenson: No, sir.

Bryan Stevenson: [to Walter] I know what it’s like to be in the shadows.

Walter McMillian: [to Bryan] If I get my truth back, you gave that to me. And there ain’t nobody that’s going to take that from us.

Bryan Stevenson: Each of us is more than the worst thing that we’ve ever done.

Bryan Stevenson: If we can look at ourselves closely, we can change this world for the better. We all need grace. We all need mercy.

[referring to Walter]
John McMillian: That’s me dad! He didn’t do nothing wrong.

Herbert Richardson: [to Bryan] You’re the only one who cared enough to fight for me.

What do you think of Just Mercy quotes? Let us know what you think in the comments below as we’d love to know.