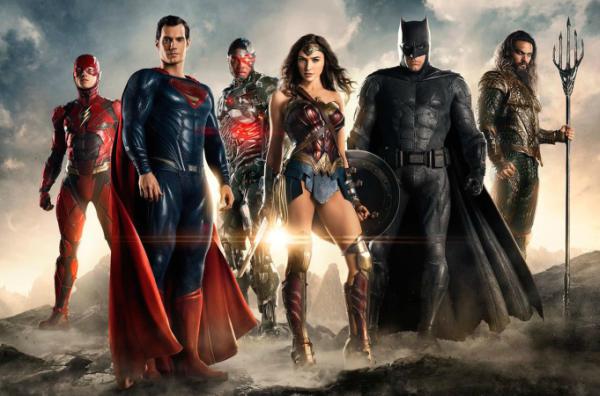 After what seems like an eternity, the long-in-gestation Justice League has finally hit the big screen, but the end result is chaotic and boring, and for a film that seems intent on always moving, the entire affair never shifts out of first gear.

The story picks up not long after Batman vs Superman, with Metropolis still stunned over the death of the man of steel (Henry Cavill), and a ripple effect is already starting to flow through the entire city. Citizens are confused, while criminal activity is on the rise. In neighbouring Gotham City, Batman/Bruce Wayne (Ben Affleck) continues to fight crime as best he can, but he is painfully aware of the hole that has been left after the demise of what many saw as a symbol for truth and justice.

During a particular encounter with a rooftop thief (staged as a knowing homage to Tim Burton’s 1989 effort), the dark knight is suddenly confronted by a bug-like creature, but manages to defeat it after a short, intense battle. A cryptic clue is left behind, but this incident has the caped crusader wanting to recruit other superheroes as soon as possible.

Meanwhile, Wonder Woman/Diana Prince (Gal Gadot) has received a sign from her mother, Queen Hippolyta (Connie Nielsen), that Paradise Island has been attacked, and the guarded Mother Box has been stolen. The culprit is the brutish Steppenwolf (voiced by Ciaran Hinds), a war demon who wants to acquire all three boxes, each one containing immense energy and power, so he can reshape and then rule the universe. Making her way to Wayne Manor, Diana agrees to help Bruce bring these strangers together.

First to join is Barry Allen, aka The Flash, an aimless youth who is somewhat of a recluse, but apparently enjoys watching Rick & Morty cartoons and listening to K-Pop (BlackPink in particular). It is also quickly established that he will provide a substantial amount of the film’s humour. Second on the list is Aquaman/Arthur Curry (Jason Momoa), a former heir to the throne of Atlantis who performs good deeds for the Icelandic community who fish in his territory. Displaying a rock-n-roll style persona, Curry doesn’t see the benefit of being part of a team, but he is eventually won over.

Last but not least is Cyborg/Victor Stone (Ray Fisher), a football legend admired by his peers, who was recently killed in an accident along with his mother. His father, Dr. Silas Stone (Joe Morton), a software/engineering genius, was able to bring his son back Robocop-style, using advanced technology that has made Victor a walking, talking computer, able to break into any system, no matter how well-protected it may be. As this otherworldly invasion continues, Victor’s abilities seem to increase.

With these new recruits on board, the newly formed League must defeat Steppenwolf before he locates the three mother boxes, but it is a crusade that may involve trying to resurrect the ultimate crime fighter, one whom the world would love to see return.

As stated before, Justice League has taken a long time to come to fruition. Initially greenlit for a 2007 release, the enterprise was originally supposed to be directed by Australian film-maker George Miller, who gloriously returned to the big screen in 2015 (after helming the two animated Happy Feet features) with Mad Max: Fury Road, one of the most singular, cinematically rich action films to come out in years. After witnessing this unforgettable endeavour, one wonders what distinctive vision would have been delivered upon us. Even with all the problems he experienced on The Witches of Eastwick (1987), it still had a wildly unpredictable atmosphere, filled with dazzling visual flourishes. Unfortunately, due to the project being stuck in development hell, Miller left the production in 2010.

Which brings us to Justice League 2017, which was handed over to Zack Snyder, who burst onto the scene in 2004 with his pumped-up, addlebrained remake of George A. Romero’s 1978 classic Dawn of the Dead, and most recently put audiences to sleep with the ludicrously self-serious Batman vs Superman. Like many modern film-makers, Snyder relies on technical overkill, and his overuse of slow motion makes each movie feel both ineffectual and overlong. His obsession with this technique reminds one of the late, great Sam Peckinpah (The Wild Bunch, Straw Dogs), but while Peckinpah used it in a way that was purposeful, hypnotic, and impactful, Snyder’s efforts come across as merely repetitious, redundant, and hollow, existing solely because today’s cutting edge technology allows him to fashion scenes in this way. Though Snyder has been making feature films for over a decade now, there has been little maturity or development in his style and approach, which remains juvenile and simplistic.

But his latest outing has an incredibly jarring tone and structure, and there are understandable reasons for this. Firstly, it is obvious that the film had a significantly longer running time, as the plotting is haphazard, and numerous characters and their plights come and go with an awkward suddenness. Don’t be surprised if we see an Extended Cut appear on Blu-Ray in the near future (a 170 minute running time was listed at one stage, before changing to the current 121).

The second reason is that Snyder, due to a family tragedy, had to leave during post-production. Taking over the reins was Joss Whedon, who had achieved incredible success across the superhero waters at Marvel with The Avengers and its sequel Age of Ultron. When footage started hitting the cutting room floor (including scenes involving Jesse Eisenberg as Lex Luthor), reshoots were called for, leading Whedon to perform some substantial rewrites (he even sacked composer Junkie XL in favour of veteran Danny Elfman). It is reported that Whedon reshot up to twenty percent of the picture, and because of this Justice League has acquired a maddeningly schizophrenic tone.

The film moves from sour-faced melodrama to lightweight frivolity without rhyme or reason, amplified by the fact that Snyder’s monotonous glumness and Whedon’s overly jokey writing (where every character seems the same) never gel for a second, with one’s approach continually undercutting the other’s. How much better this would have been with the excised footage re-instated is of course hard to say, but what is left is a never-ending stream of exposition, character poses, largely incoherent battle scenes, and a mixture of heavy-handed statements and forced one-liners that come across as trailer soundbites rather than genuine dialogue.

The cast have the impossible task of trying to push through all the cuts, tonal changes, rewrites and reshoots, with no-one truly able to stand-out. Affleck appears tired and disinterested, and it will be interesting to see how much longer he remains a part of DC franchise, especially with his acclaimed work behind the camera taking up so much of his time. Gadot (and I know I’m in the minority here) is once again quite wooden, lacking real screen presence and unable to make any of her dialogue remotely convincing. It must also be said, after Patty Jenkins’ sterling work on Wonder Woman (even though I’m not a huge fan of the film itself), where she refreshingly managed to empower on-screen female characters rather than sexualising them, that there is an unfortunate step backwards here, particularly Snyder’s unhealthy obsession with Gadot’s butt, as well as a fetishistic attitude towards the Amazonians on Paradise Island. Snyder doesn’t plumb the same depths of Michael Bay, but he does betray the strong foundation laid down by Jenkins.

Momoa offers some swagger as Aquaman, but like a manufactured rock star, the role, as written, gives him little room to move. It’s a pity, as he showed how commanding he can be in Ana Lily Amirpour’s criminally under-seen post-apocalyptic mood piece The Bad Batch. Maybe he’ll get more of a chance to shine when Aquaman comes out later next year. Ray Fisher fails to register as Cyborg, who seems more like a plot point rather than an actual character. It doesn’t help either that his father is played by Joe Morton, who seems to be playing a variation on his Miles Dyson role in Terminator 2, and this sense of deja vu distracts one from the drama occurring between Silas and his son.

Miller probably comes off best, even though he gets a majority of the strained comic material. This talented young actor, who impressed in Antonio Campos’ disturbing Afterschool, Lynne Ramsey’s uneven We Need To Talk About Kevin, and Stephen Chbosky’s well-received The Perks of Being a Wallflower, scores the occasional bullseye via skilled comic timing and endearingly goofy facial expressions.

Cavill is bland as Superman (hampered too by some poor CGI assist to remove his moustache), Jeremy Irons waltzes through with his typical professionalism, while Amy Adams, Diane Lane, Connie Nielsen, J.K. Simmons, Billy Crudup, and Ciaran Hinds are completely wasted. Steppenwolf himself is an utterly forgettable villain, the CGI used to create him is surprisingly substandard (as are the effects that fill the frenetic finale), and the Unity Boxes scenario seems a little too similar to Marvel’s Infinity Stones plot thread. Danny Elfman’s score blends in with numerous other superhero soundtracks, a situation which is exacerbated by the deliberate referencing of not only his own 1989 Batman theme, but John Williams’ 1978 Superman as well. Finally, make sure you stay to the very end.

Snyder has cited The Seven Samurai as inspiration for Justice League, but this has none of the power, humanity, and humour of Akira Kurosawa’s 1954 masterpiece. Snyder really needs to examine great movies such as this (another superb example is Na Hong-jin’s The Wailing) to realise that you can intelligently weave levity into a story that wants to say something more. If not, his films will continually be ruined by crushing, turgid self-importance.