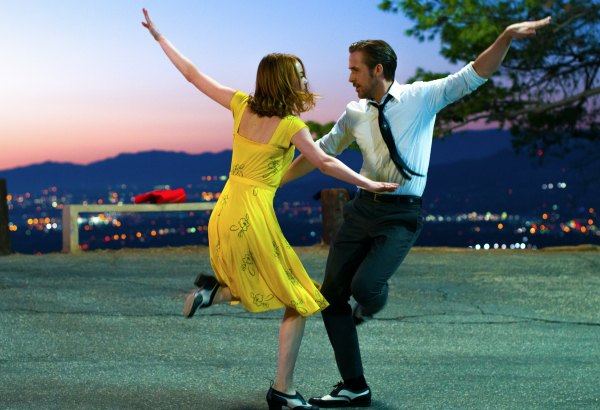 Exuberant in tone and stylish in presentation, La La Land is smile-inducing entertainment that has one reminiscing about the golden years of Hollywood. Unfortunately, it also highlights a worrying trend in modern cinema, where retro imitation is substituting genuinely innovative and risky film-making.

Set in a dreamlike version of L.A., we are immediately given our first elaborate set-piece, a strikingly staged and shot musical number that takes place amongst highway gridlock. It is also here where we are introduced to our main characters; aspiring actress Mia (Emma Stone), and jazz fanatic and piano maestro Sebastian (Ryan Gosling). Both are finding it difficult to achieve their dreams, but are adamant that success will happen.

Serendipity plays a major part in their lives, as the two continually seem to bump into one another. During a particular L.A. party (with humorous 80’s references, and a wish that P.T. Anderson had helmed the sequence), Mia and Sebastian finally make a connection (leading to a Gene Kelly-like dance between the two), and romance begins to fill the air.

As opportunities start knocking on their door, Mia and Sebastian’s relationship will take a number of turns, showing that the path to fame and fortune is never an easy one.

It has to be said first off that La La Land is an enjoyable movie event. It is expertly crafted by a talented crew, performed with gusto by a committed cast, and handled with extreme confidence by a gifted film-maker. However, as the film goes on, a certain hunger for something more starts to creep into proceedings. This colourful, energetic pastiche masks a lack of something groundbreaking, a cinematic creation that will galvanise movie fans fifty years from now in the same way past classics have obviously sparked writer/director David Chazelle in 2016.

Previous celluloid inspiration has influenced plenty of great auteurs over the years, including Michael Powell, Alfred Hitchcock, Francis Ford Coppola, Brian De Palma, and Quentin Tarantino. But where these particular film-makers combine a love of cinema with an individual stamp that is all their own, a growing amount of directors are mistaking overt mimicry as personal imagination. Perfect examples are the number of thrillers and horror movies that are aping styles of a bygone era, rather than using it as a foundation to create something fresh and invigorating.

Three films come to mind while watching La La Land; Brian De Palma’s wild, sharply observed opera Phantom Of The Paradise (1974), Peter Bogdonavich’s unfairly maligned At Long Last Love (1975), and Walter Hill’s high octane rock ‘n roll fable Streets Of Fire (1984). All bear each director’s fondness for prior productions and imagery, but they then weave a singular vision that is connected to their own body of work.

Chazelle, who dazzled audiences with his vividly realised, partially autobiographical Whiplash, again uses music as a driving force, but the distinct hand that moulded that film is somewhat missing here. His joy for cinema is apparent, with numerous posters, references and homages dotted throughout the movie. One just wishes that his own voice could be heard above all these wistful tunes.

The rather old-fashioned view of women in Hollywood is a little jarring and somewhat dated. With darker, more provocative features out there such as Starry Eyes, The Neon Demon, and Always Shine, this rather rose-coloured view should be treated as part of the fantasy world on show. But then again, if there were a more realistic presentation, we may have got something confrontingly dour like Martin Scorsese’s unforgettable New York, New York (1977).

Both Stone (who is certainly fashioned to resemble a young Natalie Wood) and Gosling are incredibly likeable, forming a chemistry that is absent from too many films today. Their conviction to the material is notable, and perform various singing and dancing duties with professional aplomb. J.K. Simmons, who garnered an Oscar for his memorable turn in Chazelle’s Whiplash, makes an amusing appearance as a grumpy club owner.

One admires Chazelle for wanting to keep the spirit of old-Hollywood alive, but like so many current film-makers, it is at the expense of making an inventive, unconventional movie that can stand on its own. Yes, don’t forget the classic artistry that enabled Tinseltown to entrance and enthral millions of people around the world for decades, but keep the cinematic fire burning by making great, new films that will inspire future generations. This constant craving for product with a vintage sheen is surely an indicator that there is a shortage of truly wondrous cinema being released in Hollywood today. Call it Catch 22 – The Musical.