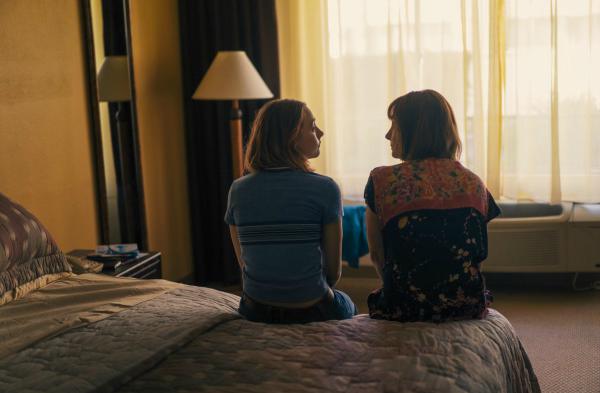 To be young and restless; to be home and hate it; to resent your mother; to be your mother; to feel like there is an entire world just outside the city limits, waiting to be explored: these are the themes coursing through Greta Gerwig’s magnificent coming of age film, Lady Bird.

“Just once I’d really like to hear ‘New York Groove’ play and feel like it really applies to my life,” Lady Bird says longingly while standing in a closed grocery store checkout lane with her best friend, Julie. With these words, the titular character begins her journey to fulfill her long harbored desires: to be somewhere else and be someone else.

With Gerwig at the helm, Lady Bird’s world feels real, visceral, and inherently female. The key relationships in the story are not with the men in Lady Bird’s life, but the women. One of the most delightful relationships in the film is that of Lady Bird and Julie. The two eat communion wafers while giggling about sacrilegious bathroom activities, resent and encourage one another, and break apart and come back together by eating cheese, dancing, and watching a sunset while “Crash into Me” by Dave Matthews Band overlays the scene. It’s one of the first times I have seen a friendship on screen and thought, “Wow, that reminds me of me and my best friend.” That feeling is a credit to the craft of Gerwig, her attention to detail, and her being a woman. It does make a difference, you know. Having female writers and directors.

Now, that’s not to say that the film doesn’t delve into the often-fraught life of teenage romance. In fact, the peripheral of the film focuses on Lady Bird’s desire to be in love. Like her dream of moving to the East Coast, being in love offers the promise of something real, an adventure sure to lead to some sense of fulfillment in her “unlived” life. For Lady Bird, being in love and having sex are inherently connected. When she dates Danny, she feels an emotional connection, but is slightly disconcerted at the lack of action she’s getting. When she dates Kyle, it’s all sex and attraction, nothing emotional or intellectual (despite the pounds of books Kyle is constantly reading).

What is most brilliant about Lady Bird, though, is that it allows us to view the lives of the McPherson family through two sets of eyes: Lady Bird’s and Marion’s. We understand and are frustrated by Lady Bird’s self-absorption. She is a pretty crappy friend to Julie when she decides to be cool, she loves her father but makes no attempt to know him, and her mother both infuriates and inspires her. Marion does everything in her power to provide opportunities for her daughter and cannot fathom why she won’t rise up to the occasion to utilize those opportunities as a tool for success. Both characters have, as Larry observes, “such strong personalities,” and strong women are complicated. Often in film, most especially when written by men, strong women are only strong because of what they’ve had to endure (rape, abuse violence). Their strength is usually portrayed as their ability to become more masculine, using revenge, violence, and abuse to regain some sense of power.

Lady Bird excels because it leans into the layers of complexity that often make up strong women leading ordinary lives. This is done particularly well with Marion, who loves her husband but resents the financial situation of her family. We see her desires most clearly in a brilliant scene where she and Lady Bird go to look at open houses in the fancy neighborhood. In the final sequence of the scene, we see Marion give an impeccably designed kitchen/dining room area one last longing look after everyone has left. Here, she is the same as her daughter who aches for something more than she has. For a moment, they are equals.

It is, of course, just a moment, and Marion steels herself back into the hard-ass mother she feels she must be in order for her daughter to achieve a better life. The two are so similar, but they have no language in which to express any semblance of delight in one another. Their relationship is complicated and claustrophobic, a result of living under the same roof for eighteen years.

Yet in all their violability, there is deep, deep love. The moment they share after finishing The Grapes of Wrath in the car; Lady Bird defending her mother against Danny’s judgment; Marion altering Lady Bird’s Thanksgiving dress late at night, after everyone’s gone to bed. The seeds of intimacy planted throughout the film allow the characters to feel complex and fully formed. The women are complicated because they are smart and they have desires. These complications are explored and clearly delighted in, with every second of the film seeming to celebrate the complexity of women’s most fundamental relationship: that of mothers and daughters.

The story is one of paradoxes: resentment and love, expectations and reality, leaving and coming home. Lady Bird makes it clear that once home is left, it becomes a sacred space in our hearts. The complications of that space vary from person to person, but the feeling is the same: where there was once disdain, there is now love; impatience becomes longing; frustrations form into gratitude. Once your released from what was once perceived as confinement into freedom, you’re capable of understanding more clearly the parts of yourself that were formed by the house in which you grew up and longed to leave.

Lady Bird is a love letter to complicated women and complicated homes. It’s both hilarious and heartwarming, exploring the way seasons of change effect the formation of people. It is undoubtedly one of the best films of the year, and Greta Gerwig should be considered a creative force in the years to come.