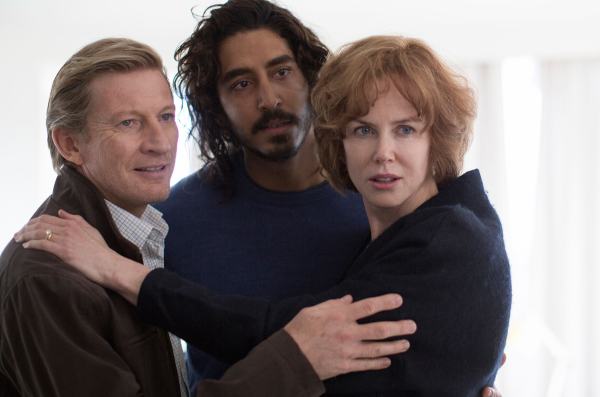 The film Lion, snatches you away on an unexpected journey that leaves you stunned, brings you to tears, and ultimately leaves you joyfully inspired. Lion is a remarkable story of a five-year-old Indian boy named Saroo (Sunny Power). After being tragically separated from his brother Guddu (Abhishek Bharate) at a railway station, he finds himself alone on an empty train that carries him 1600 miles away from his family. After narrowly escaping the nightmare of enslavement and living homeless on the streets of the massive city of Calcutta, he survives by stealing food from shrines and rummaging through trash. Saroo is then discovered by a caring man. Not knowing what to do, he turns Saroo over to the authorities.  Efforts are made to locate his family, but with no success. Placed in an orphanage more akin to a prison, Saroo finds salvation when adopted by an Australian couple. After 25 years, Saroo becomes haunted by his memories. Driven to find answers, he painstakingly searches to find his origins. With the help of Google earth, he finds his small village home and is reunited with his birth mother and sister.

The film seems to be broken into two acts. At the beginning, you are delivered into the story from an elevated view of the countryside. You develop a familiarity with the scene as you see Saroo in his boyhood innocence and Guddu calling us to follow. Seeing how Saroo idealizes his older brother and witnessing them hopping onto a moving train to pillage coal foreshadows what is to come. The small bounty of coal is exchanged for milk and carried home where we meet Saroo’s mother and baby sister. The mise-en-scene puts you in the humble conditions of Saroo’s home life and the means of their survival as you sit with them eating a meager portion of bread provided by Saroo’s mother. After dividing up the milk with the siblings, little Saroo offers his mother his portion. She refuses it insuring her children won’t go hungry. It is sequences like this where Director Garth Davis shows his brilliance in telling the story.

The first act clearly feels like an international film. Other than the scenes, the captions really do the trick. This effectively works for the film because it forces the audience to become a participant. The first act shows the brilliance of the screen writer Luke Davis with shots placed from Saroo’s point of view, keeping the audience focused on him and a part of the journey. This is also contrasted by the aerial views with shots pulling away. This emphasizes the smallness and vulnerability of our subject, conjuring up a deep helpless emotion of the audience. You are riveted to the plot for you need to know what happens next. You feel you must stay with Saroo because there is a burning need that your best hopes for Saroo’s salvation will become actualized.

The second act begins with Saroo meeting his adopted family. The captions go away and the feeling of the film changes to a mellow drama. We see the conflict of a second adopted child who suffers from emotional trauma. He exhibits outbursts of rage causing disruption to the tranquil peace of the Australian home. The portrayal of the story does not quite maintain the same level of intrigue, but by this time the audience is fully invested. What truly helps is the talented casted delivering an incredible performance. Dev Patel as the grown Saroo is confident in his role as a student of hotel management and does great work with the brilliance of Nichole Kidman as supporting actress portraying the adopted mother Sue Brierly. David Wenham as the supportive father John Brierly terrifically executes his role as the quiet stabilizer.

The tension builds in act two when Saroo’s suppressed memories are triggered by the sight and smell of an Indian food delicacy at a party. It triggers a familiar memory from his past when he was lost. The story not only reveals that Saroo was lost as a child, but that his identity was also lost. The second act intersects other stories leaving you wanting to know more of Sue Brierly’s background and Macintosh, the adopted brother.  However, the film accomplishes what it sets out to do. The ending is bitter sweet but leaves you inspired and grateful. Lion Is a must see, No doubt you will be moved by the story.