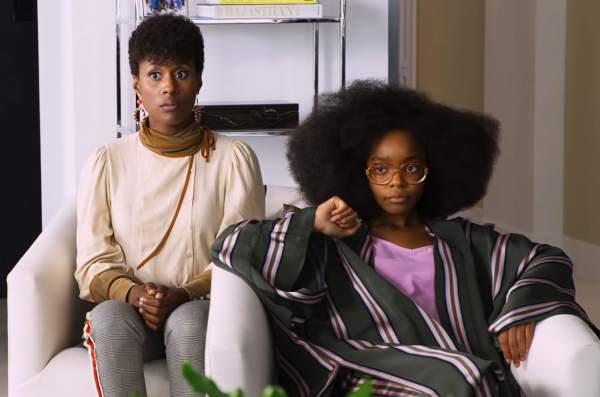 Tina Gordon’s Little, follows Jordan Sanders (Regina Hall), a heartless business woman, as she gets cursed and transformed back to her childhood self. The opening scene starts off with 13 year old Jordan (Marsai Martin) performing at her annual middle school talent show. Her performance with a wrecking ball is going great, until the typical 80s pre-teen bully decides to sabotage Jordan, causing her to fly off stage. Jordan realizes that she would never have to face bullying once she wasn’t so “Little.”

If you’re looking for a comedy that doesn’t quite get deep into human emotions, then you’ve found the perfect movie. I’ll admit, Little was very humorous and I enjoyed watching the film. However, Jordan’s character development is close to being non-existent and for some reason, her character’s outlook on life changes in the last 10 minutes of the film. Yes, I know, most characters don’t reach their character arc until right before the climax, but throughout most movies, characters are taking steps willingly or unwillingly towards becoming a changed person. Characters don’t have sudden switches, but rather they have to gradually build up to their character arc, instead of how Jordan’s character switches within seconds. From the beginning of the movie, we see Jordan as mean, inconsiderate, and selfish. At the end, she suddenly becomes the most down to earth woman. She sacrifices her embarrassment and becomes a joke to the entire middle school, for the second time, so yes, Jordan has a major character arc, but the execution is predictable.

Character arcs are in almost every movie. I can’t even name a movie that doesn’t have a character arc because it’s become so common in cinema. In the beginning, characters have to start off one way and become a completely different person by the end. It doesn’t start abruptly, but rather, character arcs happen throughout the film, unlike Little’s approach. Since Little was more on the comedy side, the writer most likely didn’t focus on the character arc. The film’s main concerns were to get laughs because they wanted a better box office number.

Something else that bothered me was the film’s inconsistency. Everytime younger Jordan would meet a new person, she would make up a new story about who she was. Obviously, she would have to lie about her identity, but she creates multiple stories about who she is. To the CPS worker and her teacher, Jordan is Carly’s niece because her father is away at business and her mother’s a “crackhead”. To adult Jordan’s boyfriend, younger Jordan is her daughter that she’s been hiding from him. Yes, both of these explanations were humorous, but the film never addressed them later in the movie. Once Jordan transforms back to her adult self, the film then jumps three months into the future. Jordan’s finally officially dating her boyfriend, she’s no longer a terrible person, and little Jordan is nowhere to be seen, so her “daughter” is completely missing. There is never a conversation about where her “daughter” is and the characters act like she never existed.

Now, the audience is really what makes the movie worth it. Little was funny and had its moments: little Jordan hits on her 30 year old teacher, CPS thinks Jordan is Carly’s niece, Carly and little Jordan watch her boyfriend perform a strip tease, and other moments where we see 13 year old Jordan act more like her 38 year old self. Obviously there were funny moments in the film, but for the most part, Little wasn’t the reason why I was laughing.

Every time Jordan or Carly would say anything even remotely funny, the audience would roar with laughter and squeals. It was mostly comprised of middle aged women, even though the UPenn Cinemark is located in a college aged community. The women at this theater were laughing so hard that it made me forget I was watching Little. And no, I’m not bashing Little, I’m just saying it was kind of a cheesy and predictable movie. The scenes that I didn’t think were funny were mostly caused from Regina Hall’s over-acting or just kind of weird reactions from Carly, but the audience thought it was hilarious. The lady next to me was the reasons why I was laughing. She came in with a group of about seven women, most middle aged, holding her popcorn and soda and sat right next to me and my friend. Most of the theater was empty during the 7pm showing, but she decided to have all of her friends sit right next to us, and I’m glad she did. Every time there was even the slightest joke, this woman would slap her knees and I swear, the entire the theater could probably hear her laughing. During the strip tease, she yelled, “Oh, yes!” and I looked over at her and she looked very pleased watching the screen. I couldn’t stop laughing and she definitely made my $9 ticket price worth it.

If you’re thinking about seeing Little, I say go to the theaters. I suggest bringing a friend or two because Little is more of a movie to see with a group. It’s easy to follow along and doesn’t need much of an avid movie goer to understand the film, but don’t go into the theater thinking Little is going to be one of the best movies of the year. Instead, walk into the theater, buy your ticket, and just enjoy the film while you’re watching it. Maybe even sit next to a group of middle aged women.

[gets woken by a call from her boss, Jordan]
April: Hello?
Jordan Sanders: Wake up!
[quickly gets out of bed]
April: Uh, hey, Jordan?
Jordan Sanders: I need you awake when I call!
April: But I don’t know when you’re going to call, so when would I sleep?
Jordan Sanders: When I’m not calling. Am I being unreasonable?
[mouths the words to herself]
April: Yes, bitch!
[then replies out loud]
April: No, it’s not unreasonable at all.

Man: Take it the boss lady’s on the warpath this morning.
April: Every morning.

April: I really think I can help this company if you just gave me a chance.
Jordan Sanders: Just concentrate on being my assistant.

[referring to Jordan]
April: What in the black Jesus!

[comparing photos of Jordan as a teenager and as an adult]
April: How did you go from this to this?

April: You went to bed grown and then you woke up…
Young Jordan: Little!
April: That’s for white people, because black people don’t have the time.

Child Protective Services Worker: Enroll this child in school or somebody is going to jail.
April: By somebody, do you mean…
[she points to the younger Jordan]

April: Jordan, to everyone else you’re a child, so you have to start acting like a kid.

Young Jordan: You don’t understand what school was like. These kids were mean, cruel.
April: It’s not all bad at your school though.

April: You have a chance anyone would kill for. Maybe you have to do something differently at this age.
[Jordan looks at her with confusion]
Young Jordan: Botox?

Young Jordan: Get back to work!
Preston: Who’s child is this walking around in a tiny pink pantsuit?

Young Jordan: I need you to cover for me in my office.
April: I should probably dress the part.
Young Jordan: Your body can’t fit into my clothes!
[referring to her body]
Young Jordan: This is squats. This is Pilates.
April: That body looks like Baby Gap, Gymboree, OshKosh B’gosh to me.
Young Jordan: Fine.

Young Jordan: Think you’re the boss of me?
April: Say one more thing, I dare you!
Young Jordan: You’re too fat for that skirt.
April: Okay, see, I’ve been looking at you like a little girl, but you’re a grown-ass woman.
[watching April getting ready to beat up Jordan; into his radio comm]
Security Guard: We have a BMW situation, Black Mama Whooping.
[April starts spanking Jordan’s behind]
April: I told you not to test me! Yes! Start spanking your kids!
Security Guard: Remind me of my mama.

Jordan’s Teacher: Your daughter’s adorable.
April: Oh, she’s not my daughter. Ew!
[the teacher looks confused at her reaction]

[as a man is dancing seductively in Jordan’s balcony]
April: Put me in the middle of that.
[he tears his shirt off, April covers Jordan’s eyes with a blanket]
Man: Who are you?!
April: Well, I’m April with A for available.