By Brooke Chicoine (Austin, TX, US) 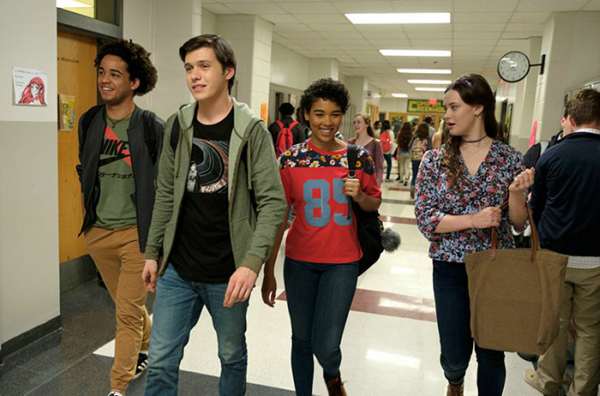 Just got back from watching Love, Simon! I think the best part of the experience was seeing it in theaters with a lot of other fan girls in the room! *THIS REVIEW CONTAINS SPOILERS*

So, first things first, it is obviously different from the book—as expected. Is that a good thing? I don’t know. The movie got great ratings and it seems like a lot of people enjoyed it, but I just couldn’t get past the differences. I don’t read too many book/movie adaptions. I couldn’t stop finding everything “wrong” or “different” with it.

I liked the additions, the vice principal was entertaining and relatable. Evan, the open gay student had some hilarious disses, for the most notable things.

They took out ALICE! I was talking with my sister about that and was confused why they would take out such a close character to Simon. As the older sister away at college for half the book, though, I suppose I can see that. Taking her out made the story feel rushed though and maybe just because I started over analyzing it. I just REALLY loved the book and changing the littlest things stirred up things in me.

If they took out Alice, however, I feel like that could have given more room to expand the relationship with Blue and Jacques. It felt more rushed IN MY OPINION. I suppose with the transitions of Halloween and Christmas/Hanukah were there to show the longer passage of time, but it just wasn’t the same. I never felt Simon even ever thought of Bram as being Blue so it was a complete surprise to me in the book. He was so stuck on it being Cal for the longest time. I think what they did well with the movie, though, was adding Lyle and having all these possibilities of who could be Blue so that we didn’t all grow attached to the idea of it being the beautiful bisexual Cal and then having imagined him the whole time suddenly shook when it was a minor character we weren’t expecting—but that’s technically what happened to Simon hence the white shouldn’t also be a default.

As far as the communication between Simon and Blue and I understand it’s a movie and has a little less time to show their interactions, but it just seemed that they were messaging each other a lot longer before things went sideways. I really enjoyed the fact that we try to figure it out with Simon and that Blue gives us hints like the first name of a president and the whole thing with his step mom and the “fetus” sibling.

I was curious about the switching roles thing? Simon was the one who was in love with Oreos, big time. Simon was the one with the Elliot Smith shirt (whom he was obsessed with and other than the noticeable poster, he didn’t say much about) that Blue tried to look for him in. I loved that he gifted him an Elliot Smith shirt once he found out and left a cute note inside! (Also, he sent the Jewish Blue a playlist of top Christmas songs lol).

I like that Blue didn’t even see the Tumblr post and Martin didn’t post the actual screenshots because in reality he wasn’t a bad guy and actually deleted them a long time ago. The whole ending got kind of weird for me. It was nice that Simon admitted to the rest of the world about his status and his love for Blue online, but the meeting place and having everyone watch him was a little strange for me. I don’t think I would have shown up if I were Bram and there was a crowd just watching Simon. Were that many people more interested in his love life than actually hanging out at the carnival with their friends?

I mean it seemed like the crowd stayed there the whole night and never diminished. In the book it was more private and cute, but I suppose it gave out a message and further pushed people to be comfortable with who they are and all that. I just felt Bram was relatable with how he was nervous to show who he was to Simon and then to actually show up—even if it were with a heterosexual relationship, I’d be quite nervous to go up on that Ferris wheel in front of a bunch of people with my crush. I guess they were leading up to that by having Bram seem more outgoing than he was in the book, though.

Martin’s ending. Martin’s ending was better I think in the movie. There wasn’t much of a conclusion in the book and that made me wonder if he was depressed the rest of his life! Although he hurt Simon, he still seemed content. I think there could have been a little more in between the crying in the parking lots and the comical joker that tried to save Simon from humiliation by still being a bit of a jokester.

Last thing I wanted to note, I loved the actors and actresses—Abby was so cute, Nick was pretty funny (minus the guitar and Assassin’s Creed I was looking forward too) and Leah was spot on appearance-wise, but she wasn’t an otaku! I had a feeling this was going to be cut out as it often is in book to movie adaptions (mostly thinking about Clary Fray from The Mortal Instrument Series and mostly talking about the TV series because let’s be honest about that “movie”.) I so wished for her to be an otaku in the film, though, as that was one of the reasons I was in love with this character! Not just an otaku, but a fujoshi! That’s so perfect! Oh, well.

Overall, I still don’t know what to think! I want to watch the movie again now that I’ve got my rant out of the way and try to see it with nonjudgmental eyes—now that I know what is going to happen I shouldn’t be shocked or confused about where it’s going. I LOVED the book, but maybe I should have waited to watch the movie first!