Manchester by the Sea (2016) Movie Review – Uncomfortable viewing at times, but a worthy story 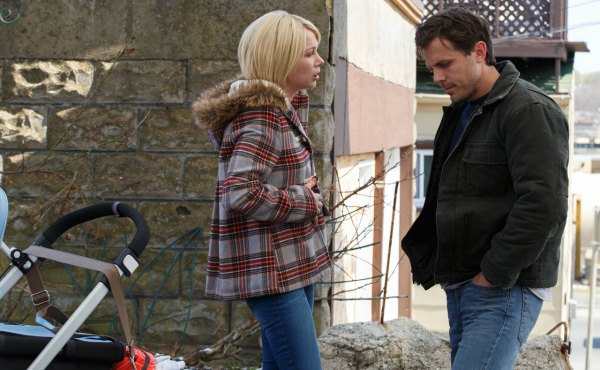 How do you describe a film that is uncomfortable to watch at times, due to the subject matter and quality of the acting performances? I can’t honestly say I enjoyed this film, but that is not really the point. While you can recognise situations, empathise with the characters and appreciate the story-telling and writing, if you come away from this film having enjoyed it, I think you are missing something. On the other hand, if you come away from it feeling moved, a little introspective and perhaps thinking about how you would react in those circumstances, then you are still appreciating a quality film.

The film opens with an account of the current life of Lee (Casey Affleck), who seems to be in a dead-end janitor’s job, living in the basement of the apartment building he looks after. He has no signs of any friends, or meaningful relationships, is sometimes appreciated by his tenants, sometimes treated like dirt by them. One such incident, in the latter category, leads to a reprimand from his boss; after which Lee goes on a drinking bender and we see he has some anger/violence issues, as he picks a fight with some strangers in a bar, who he thinks were staring at him (they were, by the way). Warning! There is an awful lot of swearing in the opening scenes of the film, in some scenes every sentence seems to include an “f-word”.

While I understand the search for an authentic voice needs to include such expletives, if they are overused it can feel like a verbal onslaught. I’m no prude, and have been prone to the odd swear word myself; but I find constant use of swearing off-putting in movies, as I do in real life. I have several friends and acquaintances who are prone to too much swearing (especially after a glass or two) and I always find it disappointing, because: 1) It is a lazy option. 2) It belies the person’s intelligence and ability to use more varied and appropriate vocabulary. 3) Overuse of swearing can make it difficult to understand what else the person is saying. Similarly, in the opening of this movie, the swearing can obscure other aspects of the script. However, I would urge you to work past this, as the language does calm down significantly as the film progresses.

Lee’s life-changing moment – which is not his first life-changing moment as we discover later – comes when he hears that his older brother, Joe, has died. This means Lee returns to his (presumably) hometown and discovers that Joe has requested in his will that Lee become the guardian of his teenage son; Joe having separated from his wife, who had her own emotional issues. Lee does not think he is capable of performing this task, and on the evidence seen so far, most viewers would agree with his assessment. As the story progresses, we see flashbacks that explain the relationship between family members, particularly Lee and his brother and his nephew, Patrick. Also told in flashback is the backstory of Lee and his family.

I’m not a great fan of flashbacks, as life doesn’t happen in flashback, but their use is justified in this story. We gradually learn that Joe was a well-loved and respected member of the Manchester community, as opposed to Lee who seems to be treated with suspicion by some, on his return to the town. Just to mention, that the editing and cutting between some scenes is brutally abrupt, which can seem a bit jarring, but I can only assume that this is intentional in order to enhance the sense of Lee’s displacement from his old life and home. Eventually we learn that a tragic family accident occurred in Lee’s previous life. Lee (probably rightly) blames himself for the tragedy, which explains his descent into a desperate loner, dead-end job, Spartan living conditions etc. Obviously, this is how Lee is masochistically punishing himself for causing the tragedy. He also has trouble communicating with other adults and this has become apparent early in the film and later, when more than one female attempts to make friends and start a conversation with him.

The town of Manchester looks idyllic, although the extreme cold and winter conditions almost emanate through the screen and add to the bleak feel of the story. Can’t help wondering if the director and writer are fans of Ingmar Bergman, as the film sometimes feels as bleak as one of his, albeit with far more spoken words. The coldness is in keeping with, and reflects, Lee’s level of discomfort at being in his old hometown and, presumably, the area where his own family tragedy took place, although we don’t know this for sure. My own viewing was enhanced by the fact that the day I watched it was a bitterly cold (by UK standards) snowy, frosty and foggy day, the perfect weather accompaniment to this film. I was not very aware of Casey Affleck’s previous work, but he turns in a very accomplished performance here.

When we first encounter Lee, it is hard to sympathise or empathise with him, but as the film progresses – and we begin to understand the reason for his reticence, insularity and lack of communication – the viewer gradually begins to understand him and, almost respect his brutal honesty. He is right! There is no way he could be responsible for his adolescent nephew, when he can’t cope with life himself. He initially suggests that his nephew, gives up his friends, local life, hockey team etc. and moves to Boston, so that he (Lee) can resume his humdrum and below the radar life, thus illustrating just how uncomfortable he is at being back in his old environs. Lucas Hedges is good as the nephew, not knowing how to react to his father’s death or the sudden reappearance of his uncle/potential guardian. The conversations between the two only emphasise Lee’s lack of parental skills and poor judgement.

Kyle Chandler plays the older brother very well, although he only exists in flashback- land, of course. But, for me, the supporting actor honours go to Michelle Williams. Given that Williams had direct experience of a loved one dying much younger than they should (she was, after all, the long-time partner of Heath Ledger and the mother of his child) this was a brave part for her to accept. The scene where she tries to reconnect with Lee, and apologise for how she treated him after their own family tragedy, and tells him that she still loves him, is so well acted and heartfelt that you almost want to look away. It is made all the more poignant by Affleck’s reaction as, again, he knows he can’t cope with this and reverts to the only coping mechanism he knows, turning things inwards and not communicating how he feels.

Other scenes worthy of mention are the reaction of Lee and Patrick to having to view the dead body of their brother and father, respectively, at the morgue. This takes place at a different time for both of them, but their very different reactions (not what you might assume) highlight the peculiar nature of that particular family ritual. Anyone who has been through the process will know that nothing can prepare you for it, there is no way of anticipating or controlling your own reaction, there is no right or wrong behaviour, and that different family members do have very different reactions. The flashback scene where the original family tragedy is shown, is done with no accompanying dialogue, although there is some in the build up to the event, just visual reactions and silent conversation, which we observe but don’t hear.

This was a good idea in itself, and is well executed except that the music used to accompany these scenes is Albinoni’s Adagio in G Minor (if you don’t know it by name, I guarantee you will recognise it when you hear it) just about one of the saddest and most melancholy tunes ever written. So, given that at the beginning of these scenes Lee is only leaving the house early one dark morning, to walk cross country to the all-night garage/shop for supplies, the music has already informed us that something dramatic and tragic is about to happen. Similarly, later in the film, just as Lee comes up with a solution, of sorts, to the guardianship problem – even though the viewer doesn’t know the details at that stage – the accompanying music is Ella Fitzgerald singing “I begin to see the light”. These musical signposts seem a bit obvious and out of keeping with the gradual revelation of past/present details throughout the rest of the film.

However, these are minor quibbles and are amply compensated for by the bravery of directorial and script decisions elsewhere. For example, the film ends with a partial-solution, which is by no means perfect. Although we now understand Lee a bit more, it is hard to see any resolution to his personal issues and the continuation of his minimal existence. Perhaps, in time, his reconnection with his family may bring him some social benefits and help him to overcome his communication problems, but that is by no means certain, or indicated. A resumption of his downbeat/disconnected life seems equally feasible. The mere fact that not everything is resolved, although some sort of solution occurs, gives this movie a real-life feel. In reality things don’t work out perfectly but, of course, life goes on in some way.

So, all in all, this is a thought-provoking, very well acted and well written film. Uncomfortable viewing at times, but a worthy story. Although you may not feel uplifted after seeing this film, you will, I think, have had some intellectual stimulation and maybe even question some of your own assumptions in relation to the characters. You never know, it may even make you/us a little more patient and understanding with people that initially seem, on the surface, to be unsocial and uncommunicative, and appreciate that there may be very valid reasons for their reticence (there usually are) …well, that is a lesson we would all do well to heed, and no mean feat for any movie to achieve. Mind you, not sure the subject matter will do much for the tourist industry in Manchester by the Sea.