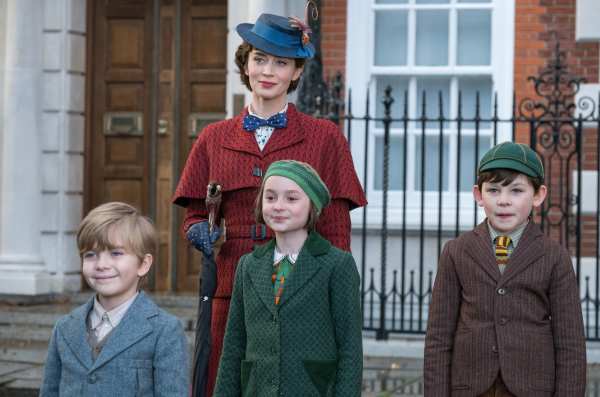 The original movie is a classic. Everybody knows the most wonderful nanny with her magical friends and her ability to make everybody smile. Julie Andrews won an Oscar for her performance which makes it almost impossible to follow in her footsteps. Unfortunately Emily Blunt isn’t quite as charming and resourceful as her original colleague. Mary Poppins Returns tries to hold up to the original but for the most part fails miserably. We never get the feeling of comfort and joy we had when seeing the original and I was waiting for the one catchy musical number to no avail. There are so many problems with movie I don’t know where to begin. The story is as unimaginative as it can be and doesn’t really make the audience what happens next because it is so predictable.

The children from the original movie, Michael (Ben Whishaw) and Jane Banks (Emily Mortimer), are all grown up. Michael was married and has three kids. His wife passed away recently and he is struggling to manage his private and work lives. He has two jobs and is working at his father’s former bank. After his wife died the families financial situation got tough and Michael had to take out a loan for their house. Now a year later Michael is behind in payments and has to pay back the full loan or his house gets repossessed. So Michael and Jane try find the certificate for the shares their father has in the bank. This is the beginning of the story. However most of the movie doesn’t resolve around it, instead the movie focuses on the children.

The movie gets even less exciting when Mary Poppins appears. She doesn’t appear to be the firm but caring nanny form the original. Instead she is constantly criticizing the children and the adults and behaves like a disapproving grandmother who is never satisfied. Emily Blunt is a more than talented actress as she has proven many times over last few years and she does her best to make the character likable. Unfortunately she never succeeds. While her acting is on point Poppins’ coldness and careless attitude towards the children makes all her efforts go to waste. Worse however is Lin-Manuel Miranda, whose fake British accent is so bad it would have been he just spoke in his regular voice. He plays the worker Jack who really has no reason to in the movie other than to appear at random points in the story and help the children in mysterious ways. While I have never seen Miranda’s world famous musical I have heard him sing before.

He is a very good singer and he shows his skills in every song. But not only does he drop his accent he also doesn’t really feel to be fully committed. None of the actors ever feel like they want to be in the movie. Especially Ben Whishaw, who I hold in very high regards, is a big disappointment. He and Mortimer just seem to wander around and spill their lines without any real compassion. The movie never captures us and takes us away like the original did. That is partly due to the bad screenplay but most of all to the songs. We all remember “supercalifragilisticexpialidocious” but don’t expect any of this here. Mary Poppins Retuns’ music very ordinary and so unimaginative that none of the songs really stay in mind. Additionally many of the scenes feel like the director had to think of some new adventure to achieve the movie’s runtime.

It’s hundred and thirty minutes runtime is so long that I often found myself hoping that the movie would come to a close. The scene often drag on and on and every time it looks like the movie might take a turn to the better it goes right back to the boring, old story. For all the bad things in a movie there are always a few Silver Linings. This movie is no different. There is once scene about half way through the movie where Mary and the children go to see the nanny’s cousin. Her cousin Topsy, played here by the brilliant Meryl Streep, can supposedly repair everything. This is the one scene that I remember from the movie. That is not due to the forgettable musical number but rather because of the unique performance by the world’s greatest actress. Streep’s costume is so jarring and fits into the cluttered environment that I could do nothing but smile.

Speaking of costumes, that is one of the more positive aspects in the movie. The costumes design is superb and so is the production design which perfectly harmonizes with it. This is also achieved but some great shots throughout the movie. There are some wide angle shots that underline the costumes so brilliantly it almost lets us forget the rest of the movie. If only everything would have been so fitting then this could have been a worthy sequel to the original. That being said, the movie might still be entertaining for children and if that is it’s only goal that the movie has reached it.

I have to say that I am glad that I did not spend any money to see this movie and neither should you. Sure, your children might want to see it, then there is no way around that but if you have a choice, don’t waste your money. It’s not a movie that is enjoyable for adults. Trust me you will be disappointed. I suggest you rather stay home and watch the original movie that way everybody will have a good time and you will save yourself a bunch of money.