By Tanner A Hahn (Platteville, WI) 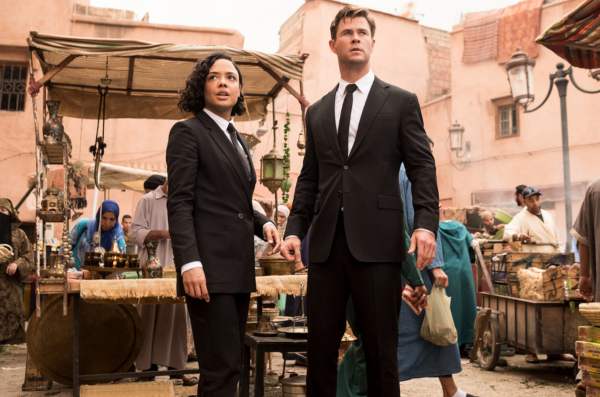 “You really think a black suit is going to solve all your problems?” F. Gary Gray, (Straight Outta Compton, The Fate of the Furious) brings us the next installment of the Men in Black franchise, this time from the perspective of new characters in the UK branch of the MIB agency. Agent M and Agent H, played by Tessa Thompson (Creed, Thor: Ragnarok) and Chris Hemsworth (Thor, Avengers) respectively, are bright spots in an otherwise underwhelming film. The chemistry these two have with one another made the movies ill written script bearable to get through. What audiences lost in a predictable and boring plot, they got back with the natural humor that flows seamlessly between the characters.

It seems as if everything that we love about the Men in Black movies was forgotten when it came to this installment. When watching Men in Black, audiences want to see the imaginative world that Barry Sonnenfeld created for us in the first three movies. Men in Black: International had so much potential and there was simply just not enough to entertain audiences the way previous films did. The trailers for the movie gave audiences all the cool and fascinating parts the film could offer. Using different car parts as weapons was by far the most interesting scene in the movie. The gradual increase in the size and imaginative design of the weapons gave us glimpses of what makes the Men in Black series so entertaining to audiences.

We see the return of Agent O (Emma Thompson) for just brief moments to help connect the different branches of the agency together. Then we see Liam Neeson introduced into the film as High T, this character could have been written so much better. The second audiences become familiar with High T, it’s easy to see through the poor character development and immediately understand how the film is going to end. This is not a disgrace towards Liam Neeson’s acting but towards the quality of the writing and the lack of emotional connections created as the film progressed.

Men in Black: International did successfully provide some interesting Easter eggs and cameos. We see which current celebrities are classified as aliens; some of them will surprise you. We even see the return of a weapon, the Noisy Cricket, which made its debut in the original Men in Black. This film also pays homage to previous alien species seen in previous films.

Our heroes throughout the film do have some high points during their adventures. Agent M and Agent H wind up racing through the streets on a flying bike and infiltrating a huge compound owned by the ex-girlfriend of Agent H. The action sequences depicted in these scenes are far better than how the movie actually ends. We get to see our heroes escape custody of the agency they devoted their lives to as well as fighting against unique aliens.

Overall, Men in Black: International is not the sequel movie that fans deserve. A black suit does not solve all of the problems this film has. The reasons for seeing this movie are strictly related to the all-star cast. They are able to pick up some of the slime that this film spews out and makes it worthwhile to see one time and then be neutralized.