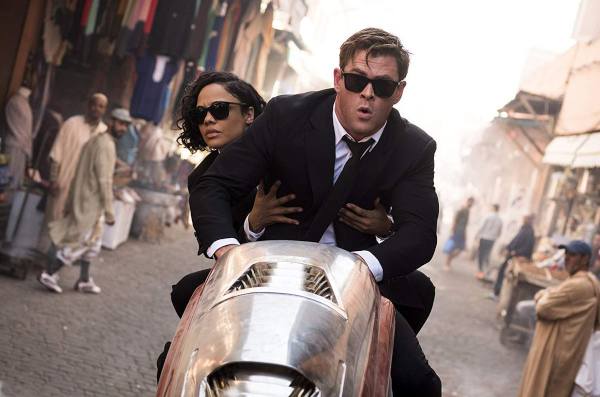 As I walked into the theater for my second viewing of Avengers: Endgame, I saw the poster for this film. Tessa Thompson and Christ Hemsworth smiled at me and I thought this would be an excellent idea for a film because of the two stars’ roles in Thor: Ragnarok. Unfortunately, the film only provided a bit of the wit and character I desired from the duo. The film’s sci-fi and action elements turned out to be nothing special either.

After a surprise encounter with an alien and the alien-hunting agency Men in Black (MIB) a girl named Molly (played by Tessa Thompson) devotes her childhood to the study and observation of aliens. As an adult, she studies to become an agent of the Men in Black, under the title “M”. Determined to have a meaningful role in the organization’s dealings, she uses her charm and a bit of fibbing about her qualifications to insert herself into an investigation that is led by the dashing yet arrogant “H” (played by Chris Hemsworth) and overseen by the director of the MIB (played by Liam Neeson). The mission is to protect an alien diplomat that came to earth for a brief party. However, after the alien diplomat is assassinated by other aliens from the Hive, and gives M a mysterious super weapon, the two leads go into an investigation of a potential mole in the MIB as well as the role of the two ghostly alien assassins.

Following the charisma and comedic chemistry of Chris Hemsworth and Tessa Thompson in Thor: Ragnarok, the appeal of a sci-fi buddy comedy between the two of them was undeniable. The banter and character interaction yielded enough funny moments, but many of the jokes were just awkward and repetitive. Hemsworth was charming enough and Thompson portrayed her tough, no-nonsense character adequately. Unfortunately, the pattern of the two leads’ relationship is predictable. Every beat of their relationship was foreseeable, but it contained enough spice to keep the attention. Fortunately, the comedic sidekick in the form of a tiny alien had the occasional funny moment without becoming annoying.  The humor and banter turned out to be a mixed bag.

Aesthetically, this movie was a standard, second-rate sci-fi movie. The alien designs are unoriginal and the effects, though not terrible, tended to look fairly cartoony. Additionally, the action, though bright and flashy, was generally not gripping. However, the integration of aliens into human society portrayed in the film was creative and interesting. One of the best examples was a guy who had an alien hidden in his beard. There were a few clever designs in the film’s environment, but otherwise the movie was unremarkable.

The investigation plot did little that was unique. It is established early in the film that there is most likely a traitor in the MIB. The red herring character is obviously the red herring and after that it wasn’t hard afterword to predict who the real twist villain was going to be. Additionally, the attempted emotional weight of the reveal of the twist villain was not sufficiently established.  M’s drive to succeed in the organization was underdeveloped and did not play a huge part in her character. There were several set ups and payoffs that didn’t add anything to the story.

Although peppered with instances of charm, excitement, and humor, Men in Black: International gives very little new or interesting to distinguish itself.