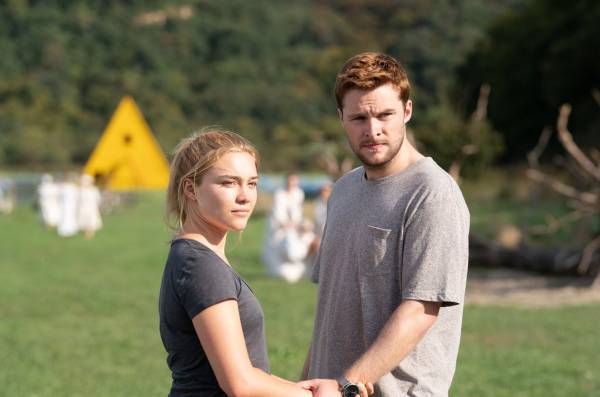 Released July 3, Midsommar was directed by Ari Aster and stars Florence Pugh, Jack Reynor, William Jackson Harper, Will Poulter, and Vilhelm Blomgren. In this gut-wrenching thriller, Pugh’s character Dani and her boyfriend Christian (played by Reynor) travel to a remote Swedish village with their friends from graduate school to attend a midsummer festival. Once the group arrives, they slowly realize that everything is not as it seems.

Purity is a prominent theme throughout this film. In an early scene, the title of a book that references a “secret Nazi language” is visible. The correlation between the Nazi Party and the members of this cult-like Swedish village runs through the entire movie. Dani’s friend Pelle (played by Blomgren), who grew up in the village, makes a half-serious joke about the villagers killing their elderly once they reach the age of 72. Not only that, but one of the village’s leaders later admits that the community strives to keep their bloodline “pure” and even occasionally resorts to procreating through incest rather than recruiting partners from the outside. Also, Pelle has to repeatedly explain to his American friends that the leaders of the village strongly discourage outsiders from taking pictures or sharing information about the village with the outside world in any way. The village even treats sexual purity as sacred, making their teenagers undergo a ceremony before they having sex for the first time. In addition, the villagers kill Christian and damn him to hell after he deflowers one of the young female villagers. Before burning him alive, they dress Christian in the skin of a bear, condemning him for giving in to his animalistic temptation and destroying the purity of one of their own.

Nature and drugs also play a major role in this film. The group of friends takes psychedelic mushrooms upon their arrival to the village, and soon after Dani finds herself accessing nature in an entirely new way. The members of the group are given drugged drinks multiple times, and Christian inhales a drug-laced smoke before having sex with the villager. Also, the villagers prefer to burn their dead instead of burying them, returning the bodies to the ash they came from. When any of the Americans ask why they should take the drugs, the villagers always explain that they consume the drugs so they can be more open to “the influence.” While this could be a reference to a deity, it’s likely referencing Mother Nature, whom the villagers worship and make sacrifices to during the festival.

Finally, the theme of family becomes apparent as Dani undergoes her journey in this film. When her bipolar sister commits suicide and kills their parents, Dani is left with no one but Christian, who originally wanted to break up with her and only draws further away from her as the film progresses. Unable to cope with this tragedy, she is beset by disturbing visions that render her unable to move on. She finds little solace in her American friends, but eventually finds people willing to grieve with her in the village. Despite the ungodly occurrences she sees while in Sweden, Dani finally finds a family who will forever be by her side in the villagers. This paradox manifests itself when she smiles while watching Christian burn to death in the film’s final scene. Purged of all reminders of her past life and the pain associated with it, she can finally lose herself in the village’s practices and the villagers’ open arms.

Though Midsommar is undoubtedly refreshing, it is by no means a perfect film. This premise involving a group of friends who travel abroad and get into trouble is not new. And this film was frustrating at times, such as when Dani would point out the strange and inhumane practices of the villagers only to have her friends dismiss her and attribute the disturbing events to the village’s customs. In the same way, it’s obvious that Simon, another visitor from the UK, has been killed by the villagers when one of the village leaders makes many unconvincing excuses in his lackluster attempt to convince Simon’s future wife that her fiancé left without her. There are also moments that are gratuitously graphic, as if Aster only sought to draw out the uncomfortable scenes for the sake of it.

While many film lovers will be turned off by Midsommar’s grisly imagery, those who are able to stomach those off-putting moments and sit through the film’s long run time will be glad they did. What Midsommar lacks in subtlety it makes up for with its uniqueness. It ignores the traditional horror movie model that we see far too often today, which consists of cookie-cutter characters and non-stop jump scares. Instead, it opts for an eerie vibe that puts the viewer on edge from the beginning. Most horror films take place at night, but Midsommar takes on the challenge of creating a terrifying atmosphere in broad daylight and actually succeeds. The acting is phenomenal, and Florence Pugh shines in her leading role. Aster also provides stunning shots of the Swedish countryside and takes some risks with unique angles that really pay off. I can’t recommend Midsommar enough to horror fans looking for something unique and anyone who appreciates good filmmaking.