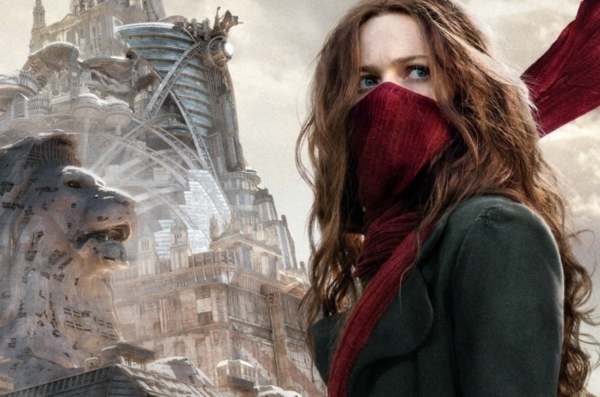 Mortal Engines. For me those two words have held a deep, emotive meaning since I read the Phillip Reeve books as a teenager. When I originally heard that Peter Jackson was working on a movie adaption I couldn’t wait for it to become a reality. That was at the peak of my Lord of the Rings devotion, and just before the Hobbit movies were released… Exactly like the Hobbit movies the Director, Christian Rivers has used modern CGI and special effects to their full potential, bringing this world of fast-paced, mobile cities to the big screen in a way that would not of been possible ten years ago. However, like the Hobbit trilogy, this has been at the expense of time spent on the storyline.

The plot just doesn’t quite flow in a way that makes any real sense. There are too many amazing coincidences and close-shaves with huge steel saws to make this a film you can really become involved in. And that’s a shame, because the original book by Phillip Reeve was IMO a fantastic fantasy novel, with a deep, immersive world you really became attached to. The reason this film adaptation doesn’t quite do it justice is, weirdly, a bit of a paradox. There’s too much stuff, and not enough time. A prime example of this is the Airships. In the original book, the secrets to heavier-than-air flight have been forgotten, so all air travel is done by airships (basically blimps) this really immersed the reader into what a world where modern technology has been lost would be like.

It made it more believable, and real, and compelling. In the film, what we have are a sort of futuristic, alien, fighter jet, wooden gondola thing… It looks awesome, and makes for great dog fighting scenes. But they don’t quite fit into the idea that humanity has devolved into ancient technologies. But, there are still warnings about no sparks, and lots of gas-bags exploding, (which because there’s no explanation about the air ships, come apparently at random) which all makes it feel a bit disjointed and floppy. It’s like a great-tasting sandwich with no filling. It doesn’t make sense. The producers have fallen into that all too common trap with modern films. They’ve played it safe, and spent most of their budget on big shiny special effects. And making everything sexier and more dramatic.

Everything’s safe, it’s rated a 12. And it suffers for it. There’s no sense of desperation or suffering. No reason to care about these characters. There’s no density to this story, everything’s a bit rushed and not followed through in terms of character development. Nothing is ever really explained, or if it is, it’s just so that the next scene sort of roughly makes sense. There’s no sense of the vast, fascinating world that Phillip Reeve created. And from the people who made The Lord of the Rings… that’s a mortal sin.