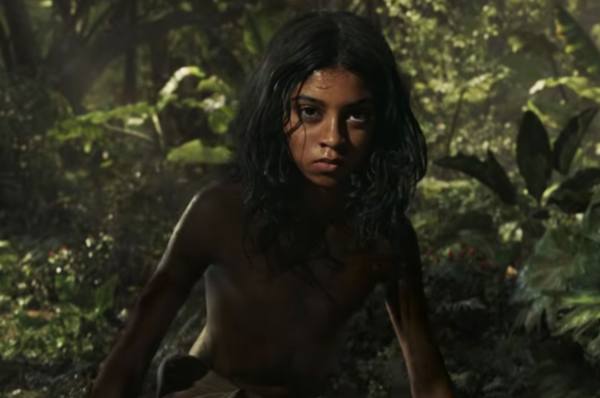 Fantasy adventure directed by Andy Serkis. The story follows the upbringing of the human child Mowgli (Rohan Chand) raised by a pack of wolves in the jungles of India. As he learns the often-harsh rules of the jungle, under the tutelage of a panther named Bagheera (Christian Bale) and a bear named Baloo (Andy Serkis), Mowgli becomes accepted by the animals of the jungle as one of their own, except by one; the fearsome tiger Shere Khan (Benedict Cumberbatch). But there may be greater dangers lurking in the jungle, as Mowgli comes face to face with his human origins.

[first lines]
Kaa: [voice over] I am the jungle’s eyes. I can see the past, and the future. It is I, Kaa, who witnessed the coming of man and the jungle trying to survive. I saw chaos and darkness come to our lands. I saw the tiger, Shere Khan, killing man, and breaking the jungle’s ancient law. And then, one fateful night, I saw the jungle place its hopes into the hands of a small creature, the like of which it had never seen before.

[referring to baby Mowgli]
Vihaan: I’ve never seen a man-cub before. It’s so small. It doesn’t fear us.

Shere Khan: The cub is mine. I already tasted its mother’s blood. It is my right.
Nisha: Your right according to who’s law?
Akela: Best you leave now.
Shere Khan: Careful, Akela. You do not want to challenge me.
Akela: This cub is under the protection of the pack. Should you decide to take me, you take on the pack. All of us. As long as I am leader, this part of the jungle is closed to you.
Shere Khan: You cannot be leader forever. The day you miss your kill, the man-cub’s blood, will run down my chin.
Akela: The cub is spoken for. He is one of us. You will teach him as you would your own. As long as I am alive, the pack will stand by the man-cub.

Mowgli: How old is the jungle, Bagheera?
Bagheera: The jungle has been here since before you were born, and it will be here after you die. The jungle is eternal.
Mowgli: Bagheera, why am I different to the other wolves?
Bagheera: You are no different, little brother. You are special.

Baloo: In The Running, Bagheera will hunt you, and if he catches you, you fail.
Mowgli: What happens if you fail?
Baloo: You don’t join the pack!

Akela: The jungle is changing. Man is taking more of it, as each season passes, and the boy may just be our only hope of survival.

[training Mowgli]
Baloo: You’ve got hands with fingers on the ends, so let’s use them.
Mowgli: What?
Baloo: Now jump, to there. Come on, hurry up.

Mowgli: Do you know why those men have come?
Bagheera: They’ve come to hunt the tiger that steals their cattle.
Mowgli: Will they kill him?
Bagheera: It won’t be easy. Shere Khan is clever. Very dangerous.

Bagheera: Mowgli, the jungle is no longer safe for you. But if you were to be in a place where Shere Khan would never go, then you would be safe.
Mowgli: Where does Shere Khan never go?
Bagheera: Mm, you know, the man village.
Mowgli: Why would I go there?
Bagheera: Because you are a man-cub. I have seen the way you look at the village. You are one of them.
Mowgli: I’m a wolf.
Bagheera: Mowgli, he wants your blood, little brother. It was Shere Khan who killed your man-parents all those seasons ago, and now he wants to kill you.
Mowgli: The pack will protect me.
Bagheera: If you fail The Running…
Mowgli: I won’t fail.
Bagheera: … you won’t be able to join the pack.
Mowgli: I won’t fail!
Bagheera: Then promise me this. If you do fail, you will go to the village. Promise me, Mowgli.

Nisha: What’s bothering you, my love?
Mowgli: All I’ve ever wanted my whole life is to be a wolf. For the others to see me as an equal. This is my chance to prove myself. To prove that I’m one of them. To prove that I belong.
Nisha: You belong. You belong, Mowgli. Don’t ever let anyone make you think otherwise. You will always be my son, Mowgli. Nothing can ever change that.

Shere Khan: [to Mowgli] My, my. How you’ve grown. And how much chaos you brought upon the pack. So much more to come.

Bhoot: You’ve been spending a lot of time on your own since the monkey-people. It’s not good to be alone. Wolves are supposed to be with other wolves.
Mowgli: I’m not a wolf.
Bhoot: Of course you are, Mowgli. You’re the best wolf I know.
Mowgli: Why do you always want to be around me, Bhoot?
Bhoot: Because you’re my best friend, Mowgli. I understand what it’s like. For nobody to want you. I don’t have any friends neither. But we have each other. And we’re kind of same, you and me.
Mowgli: We’re not the same.
Bhoot: Of course we are. Because you’re special and I’m special.
Mowgli: We’re not special! Don’t you get it? We’ll never be one of them! We’re freaks! You’re not special, Bhoot! It’s just something your mother tells you to make you feel better about yourself because you came out wrong!

Kaa: Well, look who’s here. It’s the man-cub, his destiny still uncertain. Are you afraid of me, man-cub?
Mowgli: No.
Kaa: Sometimes fear is the only intelligent response. Don’t you think?
[Mowgli doesn’t reply]
Kaa: Say something, or I shall get bored. And when I get bored, I get hungry.

Mowgli: Is it true that you know the past and the future?
Kaa: What is it you want from me, man-cub?
Mowgli: Why did you save me from the monkey-people?
Kaa: Why do you think the elephant saved you from the tiger pit? The whole jungle has been watching you, man-cub.
Mowgli: Why?
Kaa: Even you must know you are unusual. Not quite a wolf, not quite a man, or neither, or both. I think we can both agree, Mowgli, that you are something the jungle has never seen before. Every day you grow a little older. Every day you come a little closer. One day you will fight and kill. One day you will speak, and the jungle will listen. What will you say then, man-cub?

Akela: You have no right to be here, Shere Khan!
Shere Khan: Well, I think you’ll find I stay where I please.
Akela: You kill man’s cattle. You poison the jungle. You’re the reason man is here!
Shere Khan: But you permitted man to live among you. You pretend he is a wolf, when we both know that is the one thing he will never be. He will always be a man. You poisoned the jungle. But you’re no longer leader now, are you? You missed your kill. By your law, your pack must challenge you.

Bagheera: It’ll be alright, little brother.
Mowgli: How do you know? You’ve never spent a day outside the jungle.
Bagheera: I was born among man. I bear the marks of a collar. Under my chin. I lived in a king’s palace in a cage just like this. Fed through a slot. Man’s entertainment. I only heard stories about the jungle. When I found you, all those seasons ago, I saw something in you, and I thought I could teach you. I thought I could teach you how to belong. To be like everyone else. But I was wrong, Mowgli.
Mowgli: You weren’t wrong.
Bagheera: I was wrong.

Bagheera: I was another panther in that cage, Mowgli. I bit, and I scratched, and I spent my entire life fighting. Until one day I just stopped. I stopped fighting. And I gained their trust. Gain their trust, little brother.
Mowgli: Bagheera, Don’t leave me here. Come back!

Mowgli: Akela, we must kill the tiger. I would rather die than break with laws of the jungle. And our people, your friends, are with me. But I’m not bound by those laws any more, Akela, and this is not the jungle you once knew.
Akela: When you were a cub, I looked you in the eye and saw no fear. I believed then that, one day, you would bring peace to the jungle. But you have become a man now, Mowgli.
Mowgli: I am not a man. But neither am I a wolf. Which of you will follow me?

[last lines]
Kaa: [voice over] With the tiger and the hunter now gone, the future shimmered from darkness into light. Mowgli, man and wolf, both and neither, had given the jungle a voice. And for as long as he stood watch, it would speak a lasting peace.


What do you think of Mowgli quotes? Let us know what you think in the comments below as we’d love to know.