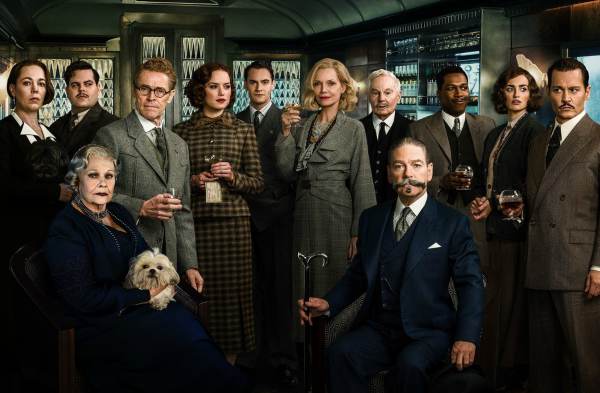 This latest retelling of the beloved Agatha Christie book, helmed by renowned actor/director Kenneth Branagh (Henry V, Much Ado About Nothing, Hamlet), unfortunately falls between two demographics by trying to cater to both, with frustratingly uneven results.

Beginning in the city of Jerusalem, circa 1934, we are introduced to the famous Belgian detective Hercule Poirot (Branagh), who is coming to the end of his current case, naturally picking out the correct wrongdoer. Ready to enjoy a rare break, Poirot’s plans are thwarted by a new assignment, which will require him to ride on the famous Orient Express from Istanbul to Calais. While waiting for the boat that will transport him to Istanbul, he meets Mary Debenham (Daisy Ridley), who instantly recognises the detective, while once on the boat, he notices a peculiar relationship between Debenham and Dr. Arbuthnot (Leslie Odom Jr.), with sparse conversation that seems suspicious.

Not long after the train has departed, it is suddenly halted by an unforeseen avalanche, and as staff check to see that all passengers are okay, Ratchett is found murdered, brutally stabbed to death by an unhinged, unknown assailant. After Bouc begs the detective to solve the case, as it will ease tensions with authorities at Calais, Poirot reluctantly agrees, and begins piecing together the clues that will uncover the murderer’s true identity.

While one tries, it is impossible not to compare this modern incarnation with the adaptations that have preceded it, and it doesn’t reach the same entertaining and compelling heights of those earlier efforts. The 1974 version is still the best known, and its attention to detail, characterisation and the mechanics of its mystery plot, were handled far better by screenwriter Paul Dehn (The Spy Who Came in from the Cold) and legendary director Sidney Lumet (12 Angry Men, Dog Day Afternoon, Prince of the City). Though Lumet’s film is only 15 minutes longer, there is a superior use of screen time, with the large cast able to make a real impression while the multiple clues are laid out in a compelling manner.

Many fans of the book may not realise that a Japanese version was produced in 2015; a big budget, two-part mini-series from highly successful writer/director Koki Mitani (The Magic Hour, Suite Dreams, University of Laughs), who was marvellously faithful to the source material, while expanding upon the backstory that leads up to that fateful murder on the Orient Express. If you can track it down, it is most worthwhile, and is headed by a star-studded Japanese cast.

Branagh’s version is more reminiscent of the 2010 TV movie starring David Suchet, not in the specific changes made to the story (which gave the Suchet entry a compelling, potent finale), but rather the truncating of the details of its colourful gallery of suspects. In wanting to streamline the material for today’s younger audiences, much character information has been removed, to the point where many of the talented actors barely get a chance to make a genuine impression. Screenwriter Michael Green (who co-wrote the far more absorbing Blade Runner 2049) deletes a couple of crucial plot points, which are then hastily mentioned later on, and even introduces some new twists, some of which are completely illogical to the puzzle Christie has laid out. Only Poirot is fleshed out to any great degree.

Performances are functional, not due to incompetence on the part of the actors, but simply because they have very little to work with. Branagh is quite good as Poirot, but of course he has the meatiest role. Much has been made of his moustache, but it is accurately presented as described in the book. His French accent is more distracting, reminding me of John Cleese’s French taunter in Monty Python and the Grail, and I was disappointed we didn’t get to see the same comical level of grooming Poirot gives his moe and hair here as Albert Finney gave his in the 1974 version.

Pfeiffer (who is thankfully making a welcome return to the big screen) tries valiantly to make the most of the limited material afforded to her, while Dafoe, Dench, Colman, and even Branagh regular Jacobi are mere background decoration. Other crucial participants come across as totally inconsequential, and the Count’s Jackie Chan-style abilities (which are shown in one scene and then never alluded to again) is jarring to say the least.

With these talented actors left out to dry, the two performers who do get a modicum of dialogue; Ridley (Star Wars: The Force Awakens) and Odom Jr. (from the hit Broadway musical Hamilton); are by far the dullest, again an obvious ploy to attract younger patrons. Another aspect where Branagh and Green don’t appear to trust the attention span of modern audiences, is the needless moving of each interrogation to a new location (apparently indicating that smart dialogue and character interplay isn’t enough to satisfy movie-goers nowadays), and even throw in an action scene that is both ludicrous and pointless. The finale isn’t helped by heavy-handed, Last Supper-type symbolism, while the prolific CGI remains somewhat unconvincing throughout.

There is just enough in Murder on the Orient Express to make it mildly entertaining, but considering the talent in front of and behind the camera, this has to be considered a major disappointment. Those new to Christie’s oft-filmed mystery may find this slick rendering enjoyable, but those who have fond memories of Lumet’s delightful adaptation, or who have seen Mitani’s loving tribute to the source material, will find this new interpretation quite a forgettable journey.