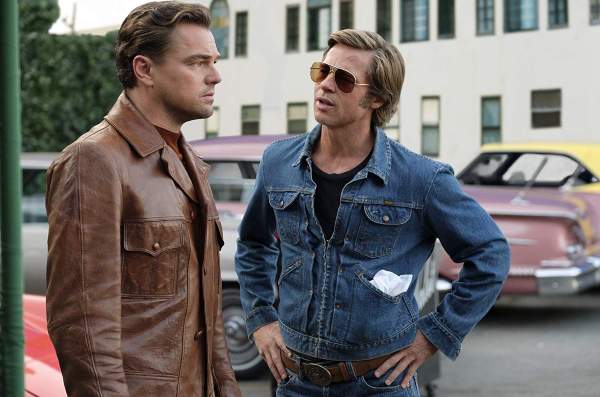 As I sat through the almost three hour character study that is Once Upon a Time in Hollywood, I couldn’t decide whether it was slow, well thought out and executed masterpiece, or an overly long mess of Tarantino ego. After taking the time to look back and analyze the rare 60’s romp, I can see it’s both.

There is no arguing Quentin Tarantino is here doing what he does best, perhaps on overkill. The dialogue, like in many of his movies is the star, housing the most organic dialogue scenes since Pulp Fiction. This is the first savior and downfall of the movie. Clocking in at almost 3 hours, most of it (save a few select moments which will be discussed) is dedicated to this form of deep character discussion, with characters commenting on each other, themselves and the dying decade around them. It does what it sets out to do, as you leave the theatre with a real understanding of the characters and what drives them. The believability is in no small part thanks to the suburb acting.

Leonardo DiCaprio and Brad Pitt as leads mesh perfectly and play well off each other as old friends. Margot Robbie although painfully underused, steals the show in every scene she is in; expressing incredible emotion, sometimes with no dialogue required. Even the short appearances by stars like Kurt Russell and Al Pacino are implemented well, being restrained enough not to overshadow the main characters, but being believable in their own right. The only problem is none of this really matters as much as in his previous films, because we aren’t learning about them as they attempt to reach a larger goal. The characters are simply spitting out exposition for its own sake.

It’s the main point people are talking about and it’s simply that the movie has no plot. We follow the characters around from place to place but with no end goal, just observing what seems like a day in their lives. Other movies from the director have overarching goals that make the slow dialogue scenes a refreshing break from the plot and often gory action sequences. This slower experience could be what was intended however other movies have done the character based-loose plotline much better, such as Fear and Loathing in Las Vegas. Both movies are character studies about the dying 60’s however Fear and Loathing has the added level of drug induced constant stimuli for the viewer to shift attention. Once Upon a Time has no extra gimmick or focus. It doesn’t have Fear and Loathing’s intense visuals or even any real action sequences through most of the movie. That may say something about our attention span as viewers, but what is says about the movie is it can just get really boring. This lends to the idea that this is more the product of an unchecked ego than a slow-burning study of Hollywood’s have and have-nots. That is until the final sequence.

Without spoilers, the final action scene is brilliant and has everything you could want from what is sure to be an iconic scene for the director. It was well known Charles Manson and his followers had a part to play in the movie. This left a slightly uncomfortable wait throughout the movie, knowing how it ended and how there is bound to be some sort of confrontation in the movie. With this knowledge Tarantino crafted a totally unpredictable finale, fast, gory and what everyone had been waiting for from him as a writer. It was so good it made the point that the movie was purposely slow to shock with a grand finale that was unexpected considering the hours the viewer had just seen. That is exactly why this both a purposely slow masterpiece and a mess of Tarantino ego.

If Tarantino did set out to make a slower movie with a massive ending for reasons of surprise and self-reflection, he did it perfectly. The question is why was this needed? He challenged himself as a director and writer to do something unique but in the end, if the viewer is bored through most of the movie than you’ve failed. Once Upon a Time in Hollywood is a movie made out of Tarantino’s self-indulgence. That means it’s full of great dialogue, attention to detail and clever writing. That also means it is sort of like an inside joke that the audience is let onto just a little too late. Overall it is worth seeing for the great performances and character that fills the movie to its brim.