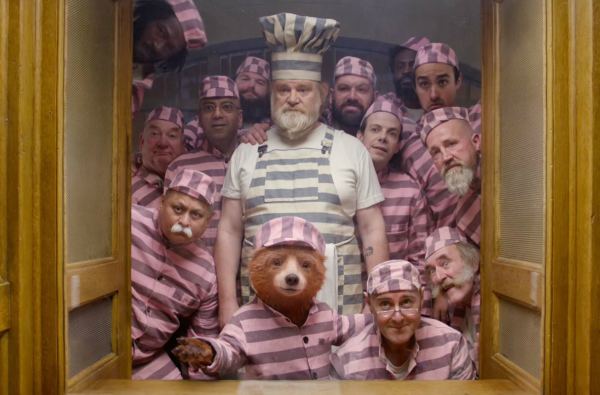 After his 2014 outing proved to be an unexpected success at the box-office, Paddington Bear returns to theatres in the inevitable sequel. But instead of getting a tiresome, unnecessary rehash, audiences will be delighted to discover that not only is this colourful, touching follow-up perfect family entertainment, it is also far superior to its appealing predecessor.

Part Two begins in the Peruvian jungle, where we are reacquainted with Aunt Lucy (voiced by Imelda Staunton) and Uncle Pastuzo (voiced by Michael Gambon), who during one of their outdoor excursions, come across an endangered cub. We soon realise that this is a flashback, and just who that cub will grow up to be.

We flash forward to the present day, and see that Paddington is now truly part of the Brown family, and is fondly looked upon by the surrounding neighbours, except of course the militantly grumpy Mr. Curry (Peter Capaldi), who still sees the diminutive bear as an untrustworthy immigrant who has stained the local area. The household remains a joyous place, with the Brown family consisting of Mary (Sally Hawkins), Henry (Hugh Bonneville), their children Judy (Madeleine Harris) and Jonathan (Samuel Joslin), and the cantankerous Mrs. Bird (Julie Walters).

Everyone is excited when news arrives that Aunt Lucy will be coming to London to celebrate her 100th birthday with her beloved adopted bear, so Paddington wants to get the perfect gift, as he holds his Aunt close to his heart, and that perfect gift does surface at the nearby antique shop, run by Mr. Gruber (Jim Broadbent). The item in question is a one-of-a-kind pop-up picture book, beautifully illustrating famous landmarks around the British capital, but its exquisite rarity comes with a hefty price tag. To raise the money required, Paddington takes on a number of odd jobs, most of which end in disaster.

Problems arise when over-the-hill stage actor Phoenix Buchanan (Hugh Grant) steals the book for completely devious reasons, and due to a major misunderstanding, Paddington is blamed for the brazen theft and promptly put in jail. Helped on the inside by newly acquired friends Nuckles McGinty (Brendan Gleeson), Phibs (Noah Taylor), T-Bone (Tom Davis), and Spoon (Aaron Davis), and on the outside by the Brown family, Paddington must catch Phoenix, prove his innocence, and obtain the book before Aunt Lucy turns up on their doorstep.

The first film was a pleasant surprise, mixing the charm of Michael Bond’s classic children’s books with a touch of gentle eccentricity, crafting the kind of innocent, sweet-natured atmosphere that is missing from too many kids films today. Unfortunately, what stopped it from hitting a complete bullseye was the insertion of elaborate, Home Alone-style slapstick and destruction, which jarred considerably with the rest of the film. Thankfully, the same mistake doesn’t happen this time, with co-writer/director Paul King and co-writer Simon Farnaby (who hilariously reprises his role as a none-too-bright security guard) deftly weaving its affectionate storybook adventure around characters they genuinely care about.

King, who directed the cult TV series The Mighty Boosh, and the quirky 2009 comedy Bunny and the Bull (which starred Farnaby), again shows tremendous style and flair, imaginatively bringing this fable to life, with eye-popping production design and costumes, gorgeous cinematography, and smoothly handled CGI. But King never allows these visual pleasures to overwhelm the people who dot this technically brilliant landscape, and this is what makes this entry such a satisfying, heartwarming experience.

The whole cast acquit themselves wonderfully. Hawkins (who is currently wowing audiences with her sublime performance in Guillermo del Toro’s sumptuous The Shape of Water) is absolutely delightful as the upbeat Mary, while Bonneville (Downton Abbey) is the perfect foil as the more conservative Henry. Walters makes the most of her role as the understanding but brutally honest Mrs. Bird, and praise must also go to Broadbent, Harris, Joslin, Taylor, and Capaldi.

Stealing the film however is both Grant (Four Weddings and a Funeral, Notting Hill) and Gleeson (The Guard, Calvary), who make every screen second count by fully embracing the script’s odd, goofy sensibilities.

Paddington 2 is that rare bird, a sequel that actually improves on the original, while still respecting both its source material and the movie-goers who adored the trip first time around. When this splendid journey reaches its moving final shot, you are already hoping that this ever-so-likeable bear and his close-knit family will make another memorable visit in the not-too-distant future. Carrying a plate of marmalade sandwiches of course.