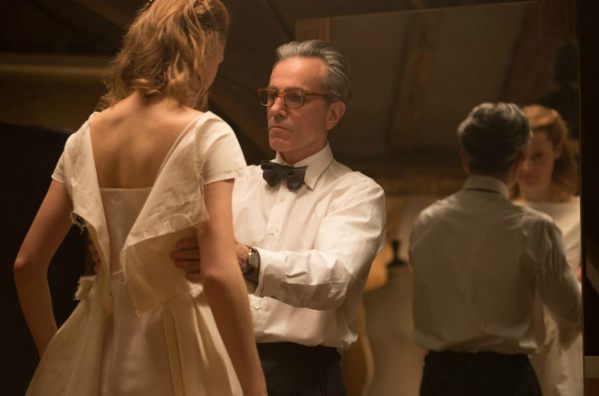 Phantom Thread is set in the 1950s post- war London, the film is about the glamorous world of Reynolds Woodcock (Daniel Day-Lewis), a dressmaker and his sister Cyril (Lesley Manville) who owns a fashion house called The House of the Woodcocks, their clientele includes royalty, celebrities, socialites and debutantes. Reynolds’ life is a life of a bachelor that includes numerous fleeting relationships, at the beginning they provide inspiration and companionship but when he becomes jaded he asks his sister to tell them to leave him and the fashion house. Reynolds’ bachelor lifestyle changes drastically when he meets Alma (Vicky Krieps), a waitress who becomes his lover and muse, this disrupts his daily rituals and serenity both in his professional and private life.

Phantom Thread is Paul Thomas Anderson 8th feature film, it comes after the unique and perplexing Inherent Vice, another period piece. Anderson has change the 1970s Californian vista of Inherent Vice with a lush and hypnotic look of 1950s London’s fashion world. This world is saturated with exquisite designed dresses, romance, lush but grainy 35mm cinematography, evocative score by Jonny Greenwood his fourth collaboration with Anderson, and at its core has a tumultuous relationship between Reynolds and Alma. Daniel Day Lewis plays Reynolds Woodcocks, a man haunted by his mother who taught him everything he knows, Reynolds always has by his side his sister Cyril who runs the fashion house, she is the only person who knows all his eccentricities and rituals, these rituals if disrupted during breakfast or at the start of his day he becomes unable to work effectively.

Anderson fully immerses us into the world of the Woodcocks siblings by creating with the collaboration of Day-Lewis’s characters that are eccentric, flawed and sometime cruel. Reynolds as the main character is charismatic and talented but also obsessive and controlling, once again Day-Lewis gives a wonderful subtle Oscar worthy performance. Lesley Manville and Vicky Krieps also give compelling performances which rivals Day-Lewis, but Lesley Manville’s performance of Cyril is more memorable, a restrained performance with few lines that conveys authority and control in every room she occupies.

Phantom Thread is not only a romantic period drama but is also a fairy tale and a haunting house film, something that is not instantly noticeable and the way it unveils these miscellaneous influences is what makes Anderson’s film such an enjoyable experience.

Its prevailing influences are The Red Shoes by Powell and Pressburger, Hitchcock’s gothic romance Rebecca and Kubrick’s A Clockwork Orange. The gothic elements are apparent from the way Reynolds still feels the presence of his deceased mother, who he sometimes imagine is still with him in the fashion house. The fairytale elements are noticeable in Alma’s story, who at the beginning is a waitress who manages to work in one of the most prestigious fashion houses in all of England.

Without the sparse outbursts from the central characters Phantom Thread is a very hypnotic film, a thing possible through the seamless editing by Dylan Tichenor. The hypnotic and languid quality of the film is akin to Reynolds lifestyle, Reynolds as a person is very calm and serene who naturally dislikes unnecessary confrontations and stressful situations, which is the main reason he has remained a bachelor most of his adult life. When Reynolds private life starts to get hectic and disrupted by his latest relationship he asks Cyril to intervene, who has the hard task of breaking off all his previous romantic ties so he can continue his job without any interruptions. Reynolds spends most of his time obsessing over his main occupation, which is to create meticulous and lush dresses that every woman in London wishes she could wear and own.

Without the musical score by Jonny Greenwood Phantom Thread would have been a different
film, seldom a musical score fits so well into a film. Most of the composition comprises piano and a few lush violins, Greenwood has manage to create a score that is very akin to classical music, a type of music that suits the world of The House of the Woodcocks.

Verdict: Phantom Thread is one of Paul Thomas Anderson best directorial efforts, it has compelling performances by Daniel Day-Lewis, Lesley Manville and Vicky Krieps, emotive and lush score by Jonny Greenwood, vibrant cinematography that conveys the lavish world of British fashion and hypnotic editing that suits the characters’ lifestyle but also highlights the eerie aspects of the narrative of the film. Phantom Thread is a film that many film critics will struggle to find any negative thing say and that rule applies to this review as well.