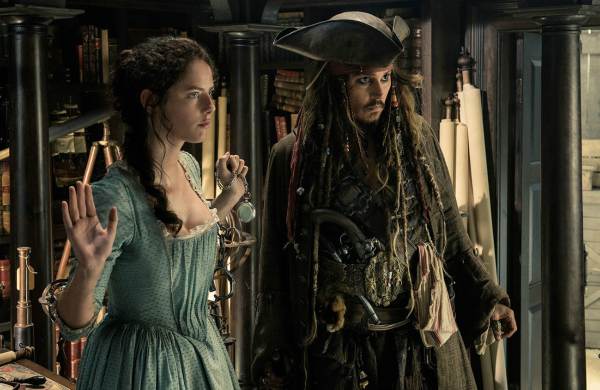 Fantasy action adventure sequel directed by Joachim Rønning and Espen Sandberg, in this fifth installment Captain Jack Sparrow (Johnny Depp) finds the winds of ill-fortune blowing even more strongly when deadly ghost pirates led by his old nemesis, the terrifying Captain Salazar (Javier Bardem), escape from the Devil’s Triangle, determined to kill every pirate at sea, including him. Captain Jack’s only hope of survival lies in seeking out the legendary Trident of Poseidon, a powerful artifact that bestows upon its possessor total control over the seas.

[picking up a drawn picture of Jack Sparrow with his sword]
Captain Salazar: Jack Sparrow. Do you know this pirate?
Henry: Only by name. You’re looking for him? Is that a yes?
Captain Salazar: Yes. For too many years the Triangle has cursed us, condemned us to this Hell on Earth. The key to our escape is Jack Sparrow, and the compass which he holds. No need to fear me, boy. I always leave one man alive, to tell the tale. Find Sparrow for me and relay a message, from Captain Salazar.
Henry: Salazar.
Captain Salazar: Tell him I’ll behold the daylight again. And on that day, death… death comes straight for him. Would you say that to him, please?
Henry: Yes.
Captain Salazar: I wish I could tell him myself, but dead men tell no tales.

Captain Jack Sparrow: That was not part of the plan.

Carina Smyth: I’m not looking for trouble!
Captain Jack Sparrow: What a horrible way to live.

Gibbs: Face it Jack, bad luck dogs you day and night.
Captain Jack Sparrow: That is a blatant fabrication.
[at that moment a bird dropping lands on Jack’s shoulder]

Henry: From this moment on we are to be allies!
[Henry catches Carina as she’s being hanged]
Carina Smyth: Considering where you left hand is, I’d say we’re more than that!

Captain Salazar: Pirates had infected the seas for generations. Taking the life of my father and his father before. So I vowed to end this plague once and for all. And that is what I did. I destroyed dozens of ships. The last ones joined together to try and defeat me! But they soon realized it was hopeless. Nothing could stop the Silent Mary.

Henry: Carina, the dead are coming.
Carina Smyth: Well, I choose not to believe in supernatural nonsense.
Henry: Do you not see what’s behind us?

Captain Salazar: You will soon pay for what you did to me.

Carina Smyth: Who am I to you?
Captain Hector Barbossa: Treasure.