Playing with Fire New Movie Quotes – ‘No shenanigans under my watch!’ 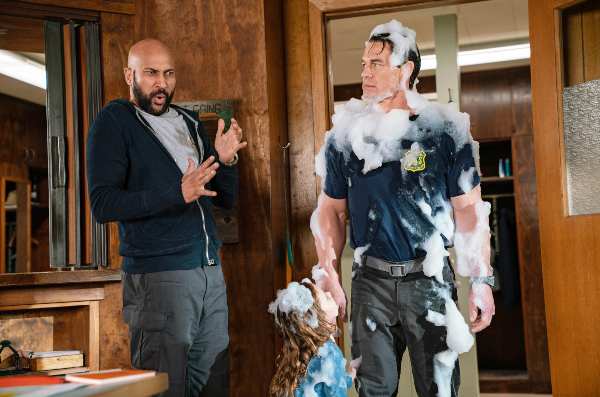 Comedy directed by Andy Fickman. The story follows straight-laced fire superintendent Jake Carson (John Cena), and his elite team of expert firefighters (Keegan-Michael Key, John Leguizamo and Tyler Mane), who come to the rescue of three siblings, Brynn (Brianna Hildebrand), Zoe (Christian Convery), and Zoey (Finley Rose Slater), in the path of an encroaching wildfire. They quickly realize that no amount of training could prepare them for their most challenging job yet, babysitters. Unable to locate the children’s parents, the firefighters have their lives, jobs and even their fire depot turned upside down and quickly learn that kids , much like fires, are wild and unpredictable.

Jake Carson: Gentlemen, we are smokejumpers, the most elite team of firefighters in the world. We must be at our very best.
Firefighters: Every second of every day!

[to the three kids he’s trying to rescue from their burning house]
Jake Carson: You do what I say, and you do it now!
[overhearing on the radio comm]
Firefighter #1: He said now!
Firefighter #2: We’re a go for extraction.
Jake Carson: No. Wait, what?!
[he suddenly gets pulled by his rope line, smacking him into the roof twice before falling to the ground]
Will: Ooh.

[to Brynn, Will and Zoey]
Jake Carson: Until we can get you back to your parent, I’m legally bound to take care of you. So that’s what I’m going to do.
[runs towards him for a hug]
Zoey: Mama!
[he turns her around]
Jake Carson: And in turn, you’re going to be obedient so we can do our job.
[Brynn mockingly salutes him]
Firefighter #1: When you do this, when you go like…
[mimics her salute]
Firefighter #1: Like that. It’s not helpful.

Will: What kind of firefighter are you?

Jake Carson: No shenanigans under my watch!
Brynn: [mockingly] My fireman. I can’t turn my neck.

Firefighter #1: What needs to happen this second, is you got to watch your tone, little sister.
Brynn: Or what?
Firefighter #1: Masher is coming to rock your world.
[they see a bull dog growling and running towards them]
Zoey: No!
[Zoey puts out her and the dog stop in its tracks]
Zoey: Sit.
[the dog sits]
Jake Carson: What just happened?
Firefighter #2: I think the baby broke your dog, Supe.
[Zoey pats the dog]
Zoey: Good doggy.

Jake Carson: If I get distracted, I can’t do this job effectively.

Brynn: Don’t you remember what it’s like to be a kid?

[after knocking over Jake with their motor vehicle]
Will: Supe, did we kill you?

[to Brynn; referring to Jake]
Firefighter #1: I know you don’t see it, but he has a sweet side.

Zoey: Boom-boom.
Jake Carson: Boom-boom, what’s boom-boom?
[Zoey breaks wind, Jake and his colleague start gagging]
Jake Carson: Don’t look at me.
Firefighter #1: Don’t do it, or I’m going to…
[they both gag]

What do you think of Playing with Fire quotes? Let us know what you think in the comments below as we’d love to know.