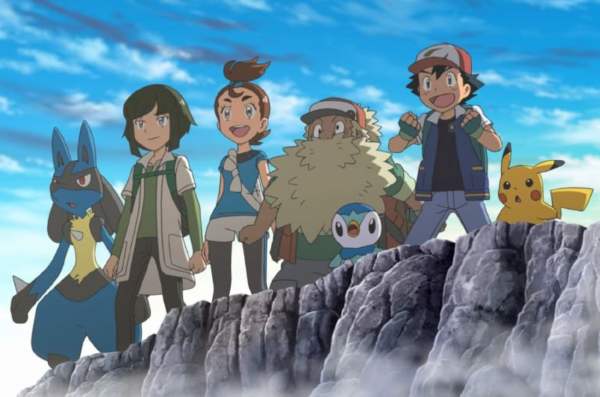 Pokémon…Pokémon…Pokémon. What do you have to say about it? Pokémon has been considered a worldwide phenomenon in the history of gaming. From video games, trading cards, countless merchandise and a long-running anime, the franchise continues entertaining up and coming generations.

Speaking of the latter, it is currently running for over 20 seasons following the adventures of ten-year old Ash Ketchum and his partner Pikachu travelling across countless regions to become a Pokémon master. To date this review, its fan base is currently polarized. On one hand, many fans that grew up with the anime have fond memories, including milestones that recently broke the mold of the traditional format. On the other hand, before the milestones, some fans were getting tired and bored from the repetitive and formulaic structures among certain seasons. As for me, I find myself in between. I didn’t watch the anime when it first came out but eventually did sometime later. I would characterize myself as a late bloomer to certain franchises. I enjoy the anime but sometimes skeptical of the choices they made later on. Nonetheless, it’s still entertaining and grew an appreciation for what the anime has accomplished recently.

The anime also spawned countless movies of Ash and Pikachu encountering legendary Pokémon, which are considered the story highlight for any Pokémon movie. For my generation, we all remember watching the first three movies in theaters while Japan continues to release the following theatrically. Each movie has its strengths and weaknesses, but still entertaining in their own right. That is until, when the twentieth anniversary of the Pokémon anime was in effect, they presented us a movie beyond different and unique in comparison to their previous films.

I Choose You! is a loose retelling about Ash Ketchum meeting Pikachu and their journey across the Kanto region. On paper, this concept sounds ridiculous. However, its execution takes a more interesting approach. For the first ten minutes, we get a decent reenactment of the very first episode of the anime. However, once the legendary Ho-oh makes its appearance, THAT is where the story starts to change its direction we are familiar with. The objective of this story is Ash and Pikachu deciding to look for the legendary Ho-oh. That description is an example of refreshment. The only criticism I would give to the story is that the pacing would be hit and miss. Considering this is a movie we’re talking about, there will be moments where there will be reenactments of certain episodes of the anime throughout, like Ash’s Caterpie evolving all the way to Butterfree and setting it free. While it caters into the nostalgia department, it would get rushed under the running time.

Despite the rushed pacing, the heart of the story is still in the right place. The main element from the original that kept this movie strong is the friendship between Ash and Pikachu. The writing and visuals help make their bond strong as the original provided. There will be suspenseful and emotional moments that would lead to…surprising reactions.

Speaking of nostalgia, OF COURSE, there are many nods, cameos and callbacks to the original that will please the hardcore fans. There is a new rendition of the original theme song during a montage scene that will exhilarate fans while the credits song “I Choose You” will shed you a tear for emotional atmosphere.

Knowing that this is a movie based on a popular anime, we always expect the animation would receive a quality boost…and this movie is no exception. The animation is top-notch. If you compare this movie with any episode of the anime or previous film, the quality upgrade has given great detail on the character designs, backgrounds, and the action sequences. There are also selective use of CGI for effects on the Pokémon attack moves and sometimes the camera movement for the backgrounds.

While the story is a retelling, the main characters themselves still retain their personalities from the original. Admittedly, it is a shame that Veronica Taylor was unavailable to reprise her role of Ash due to contractual obligations. Yet, Sarah Natochenny actually managed to provide a great performance as Ash. You wouldn’t notice much of a difference when you compare their voices. Honestly, Team Rocket felt kind of pointless in the story, but their goofy nature and puns make up for it.

As for the new characters, I deeply understand the criticism of Misty and Brock being replaced. But, let’s be fair: it is a RETELLING, so there have to be changes. I personally didn’t mind. The only time they make an appearance is where they make cameos along with the rest of Ash’s traveling companions during the credits. Back to the new faces, they’re not bad of replacements and they actually have interesting backstories and goals of their own. And to their credit, they only travel with Ash for his journey to find Ho-oh which emphasizes the straightforwardness of the story.

Pokémon the Movie: I Choose You! is a great experience of a movie for fans old and new. Sure, the pacing could be rushed and there are certain changes that would upset fans. But, the animation, music, the heart of friendship will guarantee them nonetheless. Keep in mind, this was an opinion coming of a perspective of a fan and like all Pokémon movies, they are made for people like me. For non-fans, it would be a rental at best if you are new to the franchise. This movie commemorates the 20th anniversary of the anime itself and hope to see more like this on the future. I definitely CHOOSE this movie!