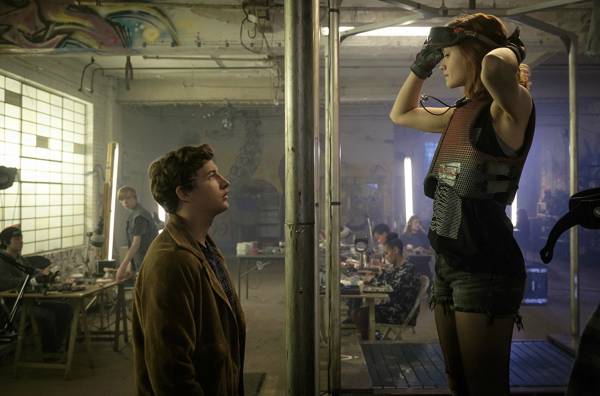 To get maximum enjoyment from Steven Spielberg’s latest big budget extravaganza Ready Player One, a vast knowledge of everything pop culture is necessary, as a continuous barrage of references from every kind of medium is thrown at the audience like confetti in a gale force wind, and the resultant effect is sadly one of overkill.

Set in the year 2045, we are quickly introduced to Wade Watts (Tye Sheridan), a teenager who lives in a run-down, overcrowded area of Oklahoma City known as ‘The Stacks’, with his Aunt Alice (Susan Lynch) and her latest loser boyfriend Rick (Ralph Ineson). Unimpressed with his lot in life, Wade, like millions of others precariously living day-to-day, escape reality by entering an expansive VR universe known as the Oasis, created by legendary designer James Halliday (Mark Rylance).

In this world, Wade inhabits a cool avatar by the name of Parzival, a Gunter (someone that hunts for easter eggs) who wants to build up enough coin to get his controller out of his current situation. Parzival has found a friend in the hulking Aech, who knows fellow gamers Daito and Shoto.

Excitement (after a nano-second of sadness) runs through the virtual realm when Halliday passes away, but the reclusive genius leaves behind a video stating that whomever finds three distinct keys, will inherit his massive fortune and business. The hunt is now on to find these online golden tickets.

During one such hunt, Parzival meets Art3mis (Olivia Cooke), who is known throughout the gaming community as an exceptional Gunter, and soon the pair, along with Aech, Daito, and Shoto, will join forces to locate all three keys, which are highly sought after by IOI CEO Nolan Sorrento (Ben Mendelsohn), who wants total control of Halliday’s wealth and software secrets.

Ready Player One is quite simply an overwhelming experience. Right from the very start, cameos, symbols, posters, and multi-format characters explode all over the screen, and admittedly it is initially joyful in attempting to spot and recognise where all these references come from. But it soon becomes apparent that all this pop culture excess smothers and then crushes any story trying to be told, and even more importantly, drains any interest and depth from the characters we are supposed to care about. It doesn’t take long before a hollow feeling starts to take hold over proceedings.

Screenwriters Zak Penn (X-Men 2 and The Last Stand, Elektra, The Incredible Hulk) and Ernest Cline (based on the latter’s 2011 novel), and director Steven Spielberg never effectively balance the real world with the VR universe, so there is no genuine disorientation or disconnect with all these people who want to bury their heads in the digital sands of Oasis. As such, we aren’t truly allowed to sympathise with any of the protagonists’ plights, so any sense of danger, consequence or catharsis is eliminated.

Backstory is blurted out via quick bursts of clunky exposition, making any scene of dramatic importance totally redundant. This kind of character interplay may work for a video game, but it completely undermines the emotional resonance of a feature film.

For a film-maker now 71 years of age, Spielberg moves Ready Player One at a breakneck pace, and the abundance of CGI effects and motion-capture work is brilliantly handled. This iconic film-maker ensures that the movie works on a visual level, and its success as an astonishing technical accomplishment can’t be denied. It’s a pity then that he allows the pop culture aspects to completely take over (evidently it’s even more so in the book), so by the time the Willy Wonka-inspired scenario reaches its gargantuan final battle, it all feels wearisome and repetitive. The Spielberg of old would have given the viewer time to breathe, and its gallery of characters the opportunity to develop, as he understood that the audience need to connect with, and not just be swept away by, the adventure they are watching.

The film’s cautionary message of VR obsession and human interaction is severely muted, and any darker investigation of this theme is discarded, with Spielberg employing a similar approach to Wolfgang Peterson’s terrific 1984 film The NeverEnding Story. The overall plot certainly reminds one of Mamoru Hosoda’s outstanding Japanese animated feature Summer Wars (2009), while other VR-related action/thrillers that come to mind are Gamer (2009) and Surrogates (2009).

The cast run, jump, and look worried in a professional manner, but cannot rise above both the overstuffed compositions that surround them, and the underwritten roles they are there to play. Sheridan was excellent in The Tree of Life (2011), Mud (2012), and Detour (2016), Cooke garnered praise for her performances in Me and Earl and the Dying Girl (2015) and the currently-in-release Thoroughbreds, while Oscar winner Rylance teams up with Spielberg for the third time (after Bridge of Spies and BFG).

The true stars however are the numerous technicians and effects artists who have painstakingly brought this world to life. Cramming every millimetre of the screen with incredible care, conviction and detail, one applauds how they have brought together so many references from so many mediums with immaculate skill.

Ready Player One is a film of mixed blessings. On the one hand, it is a superbly crafted film that, at times, brings out the excitable child within us all (the highlight is an ingenious, interactive sequence involving a well-known Stanley Kubrick film), revelling in cinematic nostalgia that can’t help but capture the hearts of film buffs around the world. On the other hand, it is a distressingly shallow experience that throws fundamental elements to the wolves in favour of self-referential excess, destroying any possibility of dramatic involvement. In fact, this could be seen as the world’s first big screen pop culture game, one that will be enthusiastically played by videologists for decades to come. I can just see those group theatre bookings now.