By Fergus McGillivray (Upland, CA, US) 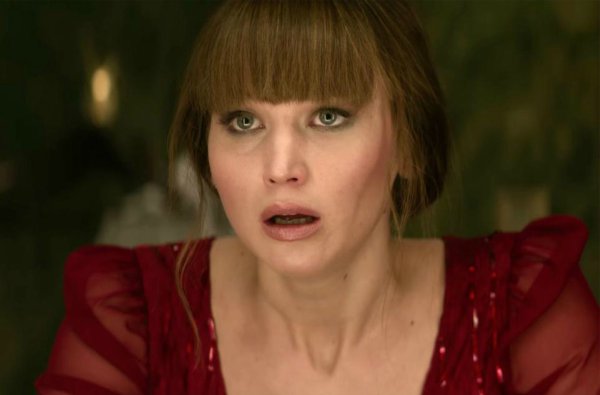 “Every human being is a puzzle of need. You must become the missing piece,” instructs the headmistress of the Russian ‘Sparrow school’ (Charlotte Rampling) as Dominika Egorova (Jennifer Lawrence) and other aspiring sex spies take notes. Soon, after much humiliation, a rape, and a lot of scowling from all parties involved, Dominika emerges from the academy ready to try on several leather outfits and occasionally seduce Joel Edgerton for the remaining 90 minutes of Red Sparrow. Containing enough plot twists to seem desperate and Russian accents as heavy as the Iron Curtain, the film’s 139-minute runtime is brutal. ‘Fun’ is the film’s missing piece, and Red Sparrow never solves the puzzle.

Dominika’s promising career as a star Bolshoi ballerina is shattered when she suffers a tragic onstage leg injury. Without the money to pay for her sick mother’s doctors, and prompted by her slimy, handsy uncle (Matthias Schoenaerts), Dominika agrees to act as an escort for a person-of-interest of Russian intelligence. When the mission unexpectedly goes awry, Dominika is faced with two options: death for knowing too much or full-time employment as a psychosexual Russian spy. Somehow, she chooses the less-fun option. After a quick stint in sex school (much nicer in the brochure), away we go to Budapest, where it’s cheaper to film. Here, Dominika is introduced to her boss, Maxim Volontov (Douglas Hodge doing a very believable ‘creepy guy from work’), and her target, CIA agent who probably chose his own alias, Nate Nash (Edgerton). From here, it’s usually safe to expect an hour or so of action, intrigue, and sex before credits roll. Francis Lawrence breaks the mold, however, by skipping the action and intrigue almost entirely.

Set (constantly) to a relentlessly dull, moping score, Red Sparrow trudges through the proverbial sleet of every underwhelming Cold War-nostalgia spy-thriller – just with more sex. Though the introductory act is bearable, the film’s midsection experiences a serious pacing issue as scenes that attempt to add complexity to Dominika’s character instead feel redundant. Also contributing to the slowed pace is the fact that (Jennifer) Lawrence and Edgerton are trapped in a script that restricts them to monotone line delivery and the same three facial expressions: scowl, grimace, and glower. By the third act, the film slows to a crawl – and the dreary score still barely keeps up. At the culmination of several plot twists comes the most relatable bit of Red Sparrow: when CIA operative (who probably didn’t get to choose his own alias) Marty Gable (Bill Camp) exclaims, “What the hell is going on?”

Save for a torture scene featuring the worst back massage in history, Red Sparrow offers nothing new to the genre. A spectacular cast, further complemented by Ciarán Hinds and Jeremy Irons, is held back by a script that takes itself much too seriously and gives its actors far too little room to demonstrate their ability. To his credit, Jo Willems, who worked with Francis Lawrence on the Hunger Games trilogy, delivers some beautiful shots of Dominika’s ballet performance and the East-European winter in Budapest, but Jennifer Lawrence and Joel Edgerton can already attest to the fact that the film is not lacking in prettiness. Rather, it is the distinct lack of excitement and substance – yes, despite the constant sex scenes – that keeps Red Sparrow from its potential.