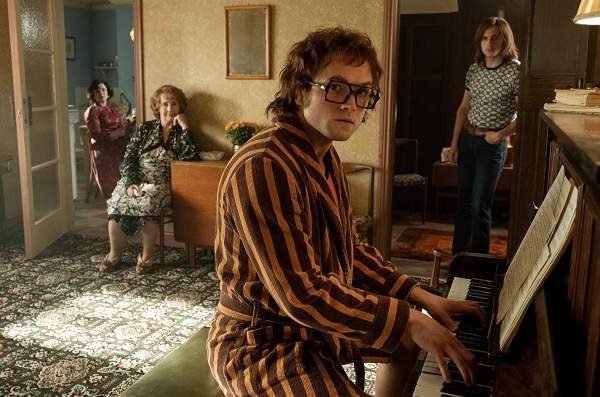 “It’s a Sad, Sad Situation and it’s Getting More and More Absurd”

The movie musical Rocketman (2019), directed by Dexter Fletcher, tells the incredible story of the British rock star, Elton John, and his personal struggles with love, depression, and addiction. Despite excellent choreography, music, and acting performances in Rocketman, the director’s choices in depicting John’s story is often bizarre and left me disappointed.

The director uses the setting of rehab to bring John’s pain and loneliness to life on screen. The opening scene introduces the audience to Elton John entering a group therapy session of Alcoholics Anonymous wearing a devil costume from a concert he left to confront the demons of his past. Through a series of flashbacks, John describes the events that led him to rehab.

The audience is taken on a journey from John’s childhood to rehab with a theme centered on lack of love. We learn that Elton John, born Reginald Dwight, came from a dysfunctional family, where his father, Stanley, and his mother, Ivy, are neglectful and unloving toward him.  Later, as a young adult, John forms a friendship with his lyricist Bernie Taupin (Jamie Bell). John wants more but Taupin rejects him because he is straight. As John rises to fame, he meets John Reid (Richard Madden) while performing at the Troubadour in Hollywood. They develop a sexual relationship and John falls in love with Reid. For the first time, John feels like the void of love and acceptance has been filled. To strengthen their commitment to each other, John asks Reid to be his business manager. Unfortunately, the relationship becomes toxic when Reid cheats on John. After a series of incidents, where no one seems to care about him John’s life spirals out of control. John turns to drugs and alcohol to numb the pain. Finally, prior to a concert in New York City, John realizes he needs help. He drives to the AA meeting and checks himself into rehab, making the movie come full circle. Explaining how he ended up in rehab answered many questions and made the film feel complete.

The acting in Rocketman was first rate. British actor, Taron Egerton does a tremendous job of portraying both the flamboyance and conflicted shyness of the famous rock star. Egerton also did his own singing during the film and was outstanding. He could give Elton John a run for his money.

My favorite element of this movie was the music. I am an admirer of John’s work. I would catch myself humming along to some of the songs during the movie. My favorite song in the movie was “Tiny Dancer”. This song has nice piano acoustics to it. It also has a feel-good message about love and friendship.

Outside of a few compelling moments in Rocketman, the director uses too many stereotypical elements. For instance, as John rises to stardom, the images of newspaper headlines in the background capturing his success are used. It is such a typical and overly used style. Perhaps the director could have showcased a more original approach to highlight John’s rise as a pop star by showing how excited John and his bandmates were when they achieved their first number one hit.  Also, to illustrate John’s fall into a decadent lifestyle, the director shows John walking down an assembly line of drugs and endless male partners. It is yet another unimaginative cliché. As a result, the director ruined those scenes for me.

Emotion is one of the key components of any great movie. A personal connection to the characters and being able to relate to the story make going to the movies a memorable and fulfilling experience. Regrettably, in Rocketman, many scenes are either too bizarre or immature to leave a positive impression on the moviegoer. For example, during the suicide scene, the stoned John hallucinates and sees himself as a little boy sitting on the bottom of the pool singing “Rocketman”. The hallucination was not needed and did not make sense. Another awkward moment followed when John was taken to the hospital after the overdose and drowning attempt. Instead of showing John in an emergency room and how close he was to dying, the film cuts to John getting ready to perform for another concert! It was like listening to a song on my iPhone and then having it cut short for an ad to play. Just as I started to connect to the scene, it crashed and burned. And I was left unsatisfied.  Scenes like John’s suicide attempt should not be taken lightly. I want to care but the director turned these scenes into comic relief, which was not effective.  Suicide and drug addiction are not comical topics. They are tragic and heartbreaking.

There is no doubt that the musical Rocketman has great music and choreography, but the director’s choices ruined many scenes. The movie starts off with two musical numbers, “The Bitch is Back” and “Saturday Night’s Alright (for Fighting)”. The choreography for these two dance numbers was amazing.  However, when a song or a dance is used incorrectly, it can be confusing. For example, in Rocketman when John has reached rock bottom, “Bennie and the Jets” is playing in the background. This song does not correlate to John’s life plummeting downward. If the director had chosen to play “Rocketman” during this scene instead, it would have made more sense because the song is about dealing with problems when no one wants to help. Many of the songs used in this movie are fun and lighthearted, even during serious scenes. It was difficult to connect to John’s story because the movie became both whimsical and childish. The director’s choices ruined these scenes.

I’m really surprised that Elton John approved the final production of this movie. I feel this movie is an insult to his life. The irony of it all is that the director of this movie is also the director of Bohemian Rhapsody, which was rated PG-13 and dealt with a similar topic! I enjoyed Bohemian Rhapsody much more than Rocketman, because I was able to connect to the main character and his problems. I was made to care and relate to Freddy Mercury without feeling uncomfortable.  I find it interesting that the two movies had similar themes by the same director, but turned out completely different. All of these components combined to prevent me from enjoying the movie.

Wow, is one word to describe this movie. It definitely left a statement, but not a positive one. I had really high expectations for this film. I admire Elton John’s work as a musician. In my opinion, if you want to honor the work of someone famous, you should do so with dignity. You can make it as accurate as possible, but do not mock his story and his challenges. If the production of the film was better, then the whole movie itself would have been great. I felt the director of the movie took a hard-left turn on weirdness boulevard and kept going. This movie was very juvenile in its delivery of serious topics about addiction and suicide. These topics should not be brushed under the rug and made into something comedic. I am very disappointed with the final product. I thought it would have been a lot better. I cannot believe that Elton John is satisfied with the portrayal of his life as laid out in the film. The whole plot of this movie was so distracting, unpleasant, and just lacked good presentation. I feel like I should sugar-coat this, but I cannot. Rocketman was that bad.