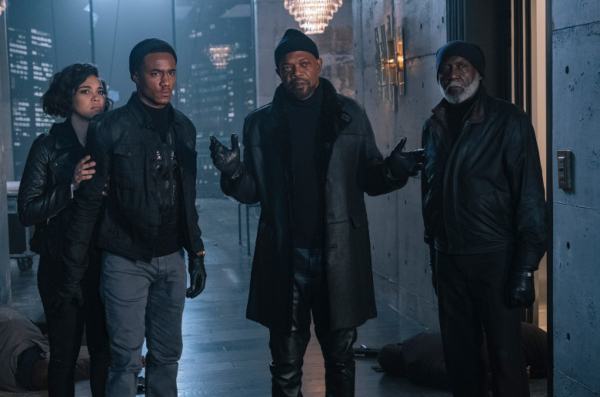 When I first saw the trailer for Shaft 2019, I was immediately blown away! I found myself cracking up and wondering who was going to get an old-fashioned ass kicking without CGI. I knew it was going to resonate with its long-standing audience and gain new fans. The original Shaft is a cult classic. The second one not so much. The line in the movie referring to James Bond, “If that dude was real, he’d want to be me,” said it all and let the audience know right away where they were going to be hanging out for the next two hours. This movie took the franchise by the horns leading it in a totally different direction with comedy, landing it in the Hudson River with a three-generation spin. I just loved the idea of Shaft not taking itself too seriously and yet it was seriously kicking some butt and taking names later.

Samuel L. Jackson in Samuel L. Jackson style brought hilarity to this tough, street-smart legendary detective dad who’s out of touch with his nerdy, non-stereotype black son who wears his pants too tight. The writers’ vision of Shaft’s wife leaving him to provide safety and normalcy for their baby boy was touching while at the same time starting with action mixed with wild unstable romance of the 70s. Although Shaft wasn’t in his son’s life, he mailed gifts (even though not always appropriate) proving that his son was always on his mind and in his heart.

John Shaft Jr. is an enjoyable character to watch on screen as he teams up with his father to help him investigate the death of his best friend. Another reason to like JJ Shaft is the actor who’s playing him, Jessie T. Usher who has a natural fun-loving vibe about him that draws you to him. He is a fish out of water in Harlem as he meanders about like Mr. Magoo and when a lady knocks him to the floor with a sucker punch, he moans while his nose bleeds, “Are there any non-violent people in Harlem?”
The love-hate relationship between Shaft and his ex-wife is bubbling with sweet comedy between two people that are still madly in love but can’t live together as one. Regina Hall brings her natural born comedic timing, and when coupled with Jackson’s flammable street bad ass attitude, it makes for a fun ride.

And when Richard Roundtree shows up holding a knife, Jackson asks, “Oh, you’re into knives now?”  Roundtree replies, “Oh, hell no, I shot him,” the audience roared with laughter!  So, there’s three generations, all with their perspective styles ending with a smart Millennial who’s part of the FBI.

Now JJ Shaft’s M.I.T. intelligence lifts this story line out of the streets and into the government as a cyber security expert for the FBI. His aversion to guns makes him even more appealing and removes him from the list that all black men are violent by nature and are probably going to rob and shoot you.

Don’t believe the sabotage reviewers that only gives 34% while the audience gives 94%. Go and enjoy Shaft for yourself. You won’t be disappointed.