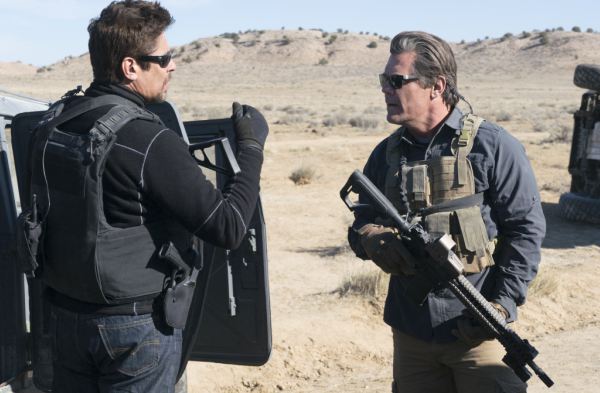 This highly anticipated follow-up to the widely acclaimed 2015 film, and the second chapter of a proposed trilogy, has big shoes to fill, and while it doesn’t reach the heights of the original, it certainly doesn’t do it a disservice either.

The story begins with aerial border patrol officers, who have just located a group of Mexican citizens crossing the U.S./Mexican border. Helped by fellow officers on the ground, we get a sense of the new kind of difficulty in dealing with people trying to enter America in the quest to find a better life. A subsequent sequence harrowingly confirms this issue.

Brought onto the case is CIA operative Matt Graver (Josh Brolin), at the request of Secretary of Defense James Riley (Matthew Modine), who informs both he and his superior, Cynthia Foards (Catherine Keener), that the Mexican drug cartels have been added to the terrorist list, and after what has been witnessed on American soil recently, he wants them dealt with using a similarly murky code of conduct. Graver comes up with the idea of the cartels destroying each other (he is obviously a fan of Yojimbo and A Fistful of Dollars), and devises a plan that involves the kidnapping of twelve year-old Isabel Reyes (Isabela Moner), daughter of kingpin Carlos Reyes, which will then be blamed on their rival, the Matamoros cartel. This would mean government involvement would be minimal, and the criminals themselves would carry out the dirty work for them.

Graver puts together his expertly trained team, including Steve Forsing (Jeffrey Donovan), as well as former assassin Alejandro (Benicio Del Toro), and initially everything goes as expected, with the deliberately messy kidnapping proving successful, and accusations between criminal gangs also bearing fruit. Things however, hit a sudden brick wall, and those on both sides of the law have to watch their backs to stay alive.

Denis Villeneuve and Taylor Sheridan’s Sicario was a welcome breath of fresh air in 2015. With films looking seriously at the consequences of the elephantine drug trade between the U.S. and Mexico being extremely rare in Hollywood, this intelligent, brooding effort was a highlight, so it was with some skepticism when a sequel was announced, especially when it wasn’t going to involve leading actor Emily Blunt and director Villeneuve (and later, due to tragic circumstances, composer Johann Johannsson). It comes as a relief then that screenwriter Sheridan isn’t interested in merely rehashing what has gone before, but instead increases the subject’s scope, shifting his focus from the drug trade to something potentially more insidious, and how it too affects many people on both sides of the border.

Sheridan’s work could easily be classed as westerns, as anyone who has seen Sicario, Hell and High Water and Wind River will attest. Like James Mangold (3:10 to Yuma, Copland, Logan), and John Carpenter before them, Sheridan loves to immerse his modern topics and themes in what almost feels like a traditional landscape, but sends his characters down a much darker, amoral path. His love of classic cinema, along with a genuinely heartfelt (if bleak) look at the current state of society is undeniably fascinating, and his total conviction allows his scripts to achieve notable dramatic power.

In place of the talented Villeneuve (whose brilliant Blade Runner 2049 proved highly divisive) is Italian director Stefano Sollima, and although he may be unknown to many movie-goers, he has crafted some impressive work of his own. Most tellingly are the solid riot squad thriller A.C.A.B. (2012), the well-received crime movie Suburra (2015), and the popular TV series Gomorrah (2014-2016), a spin-off of the excellent 2008 feature film of the same name, so one can see why he seemed like the perfect candidate to take over the reins here.

Keeping things slick and stylish, Sollima effectively keeps Sheridan’s provocative material absorbing and believable, and the early sections do remind one of Edward Zwick’s The Siege (1998) and Kathryn Bigelow’s Zero Dark Thirty (2012), with the question of moral integrity under severe adversity playing a major part in proceedings. There is also a merciless, bloody mindset that is reminiscent of action/thrillers from the 1980’s and 90’s, and could be compared to some of the films helmed at the time by Michael Mann and the late Tony Scott. This gives the film a suitably brutal edge.

However, when we enter the second half of the film, the story seems to lose some of its momentum, deciding to narrow its focus and concentrate on a small number of subplots, and it’s here where the issue of being a middle chapter starts to kick in. Sheridan is suddenly unwilling to introduce or develop specific characters or plot threads (the cartels’ inner circle remains completely off-screen, and Keener’s role is pushed to the background), indicating that much of this will be dealt with in sequel number two. This decision makes the movement from one personal story to another less successful, including one involving teenage gang recruit Miguel (Elijah Rodriguez), and it also allows a couple of key contrivances to stand out more than they should.

Performances are strong across the board, and this talented cast are a considerable asset when you start to feel the wheels spinning in the later stages. Brolin, who has rarely left our screens in recent months, is once more a tower of strength, and wonderfully anchors a film that is filled with covert mistrust and apparent hopelessness. Del Toro also maintains his considerable presence, and the changes in his character are both appropriate and dramatically satisfying. Moner, whose last film was the abysmal (even by Michael Bay standards) Transformers: The Last Knight, is surprisingly good (it must have made a difference having an actual script this time), offering up a compelling turn as the daughter of a notorious drug king, and keeps the role from falling into obvious cliché. Keener, as well as Shea Whigham (Take Shelter, Cop Car, Splinter, American Hustle), seem somewhat wasted, but with another film on the way, I am unable to say if they actually are or not at this stage.

Technically, like the first film, this is an exemplary effort, with first-rate cinematography (by the inimitable Dariusz Wolski), editing, sound design, and music score. The action scenes are executed with confident precision, keeping movie-goers on the edge of their seats.

While the original is a hard act to follow, Sicario: Day of the Soldado does offer solid rewards, and shouldn’t disappoint fans of the original, whose base has increased noticeably since the film’s theatrical release three years ago. The faults that appear in the second half appear to be solely due to the fact that another chapter is on the way, but one can’t help but feel a little letdown once that initial grip, so strong in the early going, is somewhat relaxed, with a number of loose ends hanging in the air. Once Sicario 3 is finally seen, hopefully all these deficiencies will disappear, and a new, classic trilogy will be born.