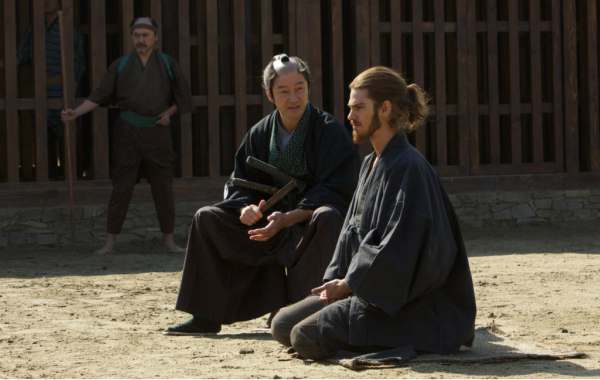 Remaining in gestation for almost three decades, this labour-of-love project from acclaimed director Martin Scorsese finally hits the big screen, and one major question immediately comes to mind. Was it worth the wait? Thankfully the answer is yes, with Scorsese delivering one of his most reflective and personal films to date.

Set in the 1630’s, we see young priests Rodrigues (Andrew Garfield) and Garupe (Adam Driver) travel from Portugal to see Father Valignano (Ciaran Hinds), who has received a letter detailing the fortunes of Father Ferreira (Liam Neeson), who has been stationed in Japan for nearly twenty years but hasn’t been heard from in five. Valignano informs the two, who trained under Ferreira, that the renowned missionary has denounced the church, taken a Japanese wife, and lives by their customs.

Garupe, but especially Rodrigues, cannot believe what has been written in the letter, so they intend to travel to Japan to seek the truth for themselves, hopefully bringing Ferreira home and back to the house of God. Valignano attempts to dissuade them from going, saying that the Shogunate have banned the religion and those who follow it, and are going to extreme lengths to keep this foreign faith out of Japan, which still largely isolates itself from the rest of the world.

Rodrigues and Garupe reluctantly enlist the services Kichijiro (Yosuke Kubozuka), a drunken, penniless stowaway who has been stuck in China for months, and is desperate to return home. Soon the trio are on Japanese soil, and are welcomed by members of a local village, who secretly continue to practice the Catholic faith, despite the fact that their priest was arrested and taken into custody by the authorities. Leading the group is Ichizo (Yoshi Oida), with added assistance by Mokichi (Shin’ya Tsukamoto), guiding villagers through what is currently a very troubling time.

As their journey continues, Garupe and Rodrigues find themselves separated, the former holding firm to his beliefs, while the latter starts to question the atrocities going on around him, and what role God plays in helping save his devout followers. As he is brought to the attention of Inquisitor Inoue (Issei Ogata) via a Judas-style betrayal, Rodrigues’ faith will be sorely tested, relying on an entity that he can’t see or hear. Filling his ears instead is an interpreter (Tadanobu Asano), who employs cleverly chosen words to humiliate and debase, endeavouring to undermine Rodrigues’ resolve enough to hopefully make the young priest apostatise himself.

Silence is not easy viewing, but that is clearly Scorsese’s intention. While Rodrigues grapples with the spiritual and the physical, trying to understand what it is he truly believes in, the story also examines the divisive cultural differences between the east and west, and how they view and perceive these particular subjects. Japan saw Catholicism as a foreign invasion, a corrupting and fracturing influence that could destroy their way of life. But like all battles involving individual thought and choice, it is the everyday person who suffers, bullied into thinking that one specific outlook is the only correct one. The manner in which the Japanese interpret the Christian afterlife is fascinating, as is their literal linking of the Son of God to the sun above, bringing so much life to their surrounding environment.

Scorsese and his long-time editor Thelma Schoonmaker (three-time Oscar winner for Raging Bull, The Aviator, and The Departed) give the material a meditative rhythm, giving not only its characters, but the audience itself the opportunity to ponder the worth, even the existence of, true faith. What is wonderful about the film is that the faith doesn’t necessarily have to be specifically Catholic, but just a deep belief in something better and greater than yourself, where people can tolerate, accept, and love one another, no matter where they come from or what their particular outlook is. The deliberate stillness may irritate some viewers, but those who are patient will be amply rewarded with a pilgrimage that is both visually immersive and dramatically satisfying. This can rightly stand alongside the deservedly lauded 1971 screen version, which was directed by the inimitable Masahiro Shinoda, who helmed classics such as Double Suicide, Pale Flower, Assassination, and MacArthur’s Children.

Screenwriters Scorsese and Jay Cocks (who has been working on this project for almost as long) have thoughtfully and respectfully adapted the celebrated 1966 novel by Shusaku Endo, and makes a more-than-worthy companion piece with the director’s other two films dealing with personal convictions and spiritual enlightenment, The Last Temptation Of Christ (1988) and Kundun (1997). It couldn’t be any more different than Scorsese’s previous film, the lively and excessive The Wolf of Wall Street, even though it too was about a person who had to make moral choices in life, albeit with a very contradictory outcome. Other films also come to mind, namely Carl Theodor Dreyer’s The Passion of Joan of Arc (1928) and Ordet (1955).

The gorgeous cinematography by Rodrigo Prieto (Amores Perros, Frida, The Wolf of Wall Street) perfectly captures nature’s beauty (Taiwan standing in for Japan), along with the conflicting human horrors that are occurring within it, and there is an inventive use of space and obstruction. One would love to see his staggering achievements rewarded at Oscar time, but one feels it will go to Linus Sandgren’s work on La La Land. Accompanying these memorable images is Kathryn and Kim Allen Kluge’s subtle, evocative music. Everything about the production is first-rate.

Performances are largely excellent. Driver (Paterson, Star Wars: The Force Awakens) leaves a strong impression as Garupe, with his unusual features cutting a striking, jarring vision amongst his Japanese surroundings. The most compelling work comes from its Japanese cast. Asano (Harmonium, Journey to the Shore, DumBeast, My Man, Thor) gets his best role to date in a non-Japanese production, delivering his deceptively cruel lines with precision and conviction. Equally fine is veteran actor Ogata (Teacher and Stray Cat, Tony Takitani, I Am a Monk, Yi Yi), who effortlessly oozes a slimy, unsettling elitism. Cult film-maker Tsukamoto (the Tetsuo series, Kotoko, Tokyo Fist, and most recently the violent remake of Fires on the Plain) offers a sensitive turn as the trusting Mokichi, as does Oida (The Pillow Book) as Ichizo. Other notable actors and directors, such as Ryo Kase (Outrage, About Her Brother, I Just Didn’t Do It) and SABU (Postman Blues, Bunny Drop, Chasuke’s Journey), appear in small roles.

Kubozuka (Go, Laundry, Monsters Club, Tokyo Tribe), playing probably the film’s most difficult role, is terrific as Kichijiro, a character forever filled with guilt and remorse, never seeing himself as worthy or strong enough to feel accepted by either God or his messenger. There are some similarities with the bumpy journey Kubozuka’s character takes in Go (2001), a film which I highly recommend.

Garfield, who also stars in Mel Gibson’s war epic Hacksaw Ridge (interestingly another faith-based drama), offers a solid performance as Rodrigues, despite a wavering Portuguese accent. As the film goes on, however, particularly during moments when the film solely rests on his shoulders, Garfield doesn’t command the screen as he should, and is in fact overshadowed by his talented co-stars. This mutes the impact of some pivotal scenes, and renders Rodrigues’ final confrontation with Ferreira a little anti-climactic. When there are more characters around him, the film regains its dramatic composure.

Scorsese’s odyssey in bringing this enterprise to life seems to have been almost as arduous as the one he is presenting on screen, so it is with joy (and relief) that the resultant feature is as grand and involving as one was hoping for. It’s nearly complete absence at the 2017 Academy Awards is disappointing, but for fans of this superlative film-maker, Silence is a film whose loving craftsmanship should be treasured, and its ambitious challenges thoroughly applauded.