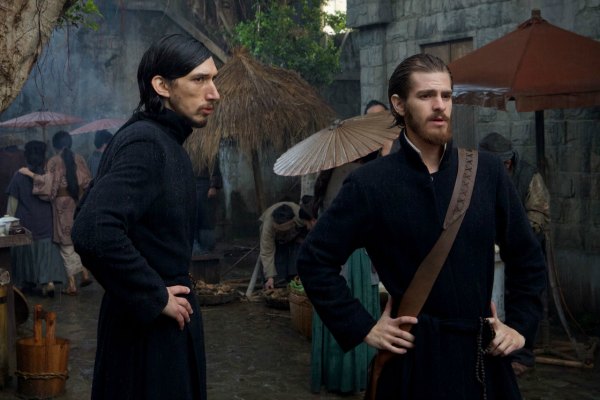 The movie is the narrative of two Portuguese Jesuit priests in 17th century named Sebastião Rodrigues and Francisco Garupe who have heard rumors about their master “Father Ferreira” who had renounced his faith in Japan. Two young disciples of Father Ferreira decide to travel to Japan to discover the truth about Father Ferreira who has allegedly committed apostasy under the tortures of Japanese authorities. On the other hand, they plan to secretly preach in Japan for the remnants of Christians and perform religious services for them.

This movie is a word-by-word loyalty of Martin Scorsese to a novel of the same name written by Shusako Endo written in 1966. Shusako Endo’s works are compared with Graham Greene in literature who himself admired Shusako Endo as a great writer. When a movie is produced based on a novel this old question always arise that which should be the first? Reading the novel or watching the movie. To me, if you read the novel first, it is likely to have eagerness to see the movie later but if you watch the movie first, it is almost impossible to read the novel later.

The motif of this movie, for those who are serious readers of philosophy of religion, reminds the concept “Gottvergessenheit” which means the forsakenness of god when you need him as Nietzsche and some others have explained. When Father Rodrigues steps on the soil of Japan has a strong belief and sees the signs of god while he and Father Francisco received the hospitability of the Japanese people in a coastal village. However, when things change, innocent people are tortured and murdered, Father Garupe is killed, and all the prayers of Father Rodrigues seem to be unheard, then this is what perceived as god’s silence by Father Rodrigues.

Some people may sympathize with Jesuit missioners in Japan and negatively judge the inquisitors. But, Father Ferreira had words to consider while convincing Father Rodrigues that Sun is the god’s son in Japan not Jesus Christ and that the seeds of Christianity are not grown in that everglade. As opposed to Father Ferreira and the Japanese inquisitor, Father Rodrigues insists that the truth is universal and the message of Christianity should spread in Japan like Europe.

On the other hand, there is another character named Kichijiro who betrays Father Rodrigues and blatantly plays Judas against Jesus. However, Kichijiro is a symbol of a typical human-being who has a suffered soul as he is chained to an endless cycle of sins and confessions. He betrays Father Rodrigues not for money but because of his fear of torture and weak soul whereas he is internally regretful.

Although Scorsese narrates the story as real as possible, but surreal elements are also observed in his picture. For instance, when Father Rodrigues drinks water from the river, he sees Jesus in the mirror of water. Scorsese finally decides to make a political portrait for his finale where Father Rodrigues’ dead body is burned under Buddhist rituals while there is a cross in his hands which implies that Father Rodrigues died as a Christian believer although he was forced to deny his faith by tyrant Japanese inquisitors. Father Rodrigues found his god in his silence and decided to be silent in response, as Jalaluddin Rumi the Persian well-known poet, says: “In Silence there is eloquence. Stop weaving and see how the pattern improves.”