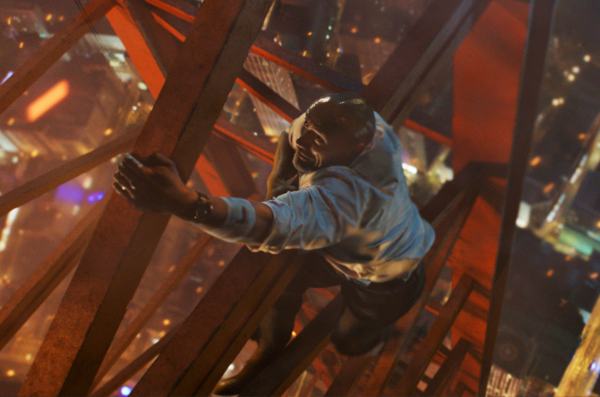 Laughable even by pure escapist standards, this highly derivative, poorly staged effects extravaganza is a collection of the all the worst aspects of contemporary action film-making.

Dwayne Johnson plays Will Sawyer, an elite FBI Rescue Team leader whose career is prematurely ended after a particular hostage situation goes tragically wrong, losing both lives and part of his left leg. Years later, he is now a security assessor, checking safeguard technology for buildings that are ready to open.

Currently in Hong Kong to inspect the mammoth tower called ‘The Pearl’ (an illogical creation that never would have made it past the planning stage), Sawyer and his family, wife Sarah (Neve Campbell), son Henry (Noah Cottrell) and daughter Georgia (McKenna Roberts) are greeted with open arms by its owner Zhao Long Ji (Chin Han). Also there to greet them is ex-soldier and former colleague Ben (Pablo Schreiber), who recommended Sawyer for this prestigious job.

Unbeknown to Sawyer, a nefarious group of criminals are carefully organising to shut down the building’s safety features, and set the structure on fire, all for reasons that will eventually be revealed by the chief bad guy. Getting in the way of their scheme is, of course, the hulking Sawyer, ready to put his own life on the line to save his family.

There is no getting around the fact that Skyscraper is nothing more than a feeble grab-bag of plot threads and scenes from other, far superior action films. The major one is obviously Die Hard, but this generates none of that classic’s excitement, invention, or human involvement. Other ‘homages’ include The Towering Inferno, which offered impressively fiery scenes filled with danger and suspense, and Enter the Dragon, copying a hall-of-mirrors finale which is clumsily telegraphed early in proceedings. The initial set-up even reminds one of another Bruce Willis film, Hostage.

Writer/director Rawson Marshall Thurber, who after scoring a box-office hit with his well-received comedy We’re The Millers, followed that up with his first teaming with Johnson, the predictable, strained action/comedy Central Intelligence (a project that did have potential), and immediately revealed his ineptness in staging, shooting, and executing effective action sequences. That same sloppy nature is on display here, rushing through set-pieces without properly drawing us in, never creating a sense of threat and menace, and smothering everything in completely artificial CGI. Thurber almost seems too aware of the beloved films he is ripping off, so wants to hurriedly reach the finish line before audiences have time to start making comparisons.

With this being his third film in seven months (not to mention his TV series Ballers), Johnson is certainly striking while the iron is hot, but it is now getting to the point of overkill, especially when the movies themselves are so forgettable and interchangeable. What’s most frustrating is that Johnson is a genuinely likeable screen presence, but the second-rate scripts he is choosing is starting to take its toll. I really hope this string of misfires comes to an end, as I would love to see a project properly compliment Johnson’s utterly agreeable, big screen persona (I do hope, however, he changes his mind on the proposed remake of John Carpenter’s iconic Big Trouble in Little China; what we need is a sequel, now focusing on Old Man Jack Burton).

No-one else gets much of a chance to make an impression. Campbell does what’s required, but many of the supporting cast turn in sub-standard performances, while the villains themselves are dull, missing that much-needed intimidation factor.

Skyscraper is disposable entertainment of the worst kind, manufactured by committee, and doesn’t even try to hide which specific demographic and market it is aimed at. Instead of enduring this disaster, audiences would be better served watching the movies that Thurber thoroughly fails to imitate. Or, alternatively, to get a first-rate action fix of something more modern, dive into the world of John Wick instead, a series that hits the bullseye brutally and brilliantly.