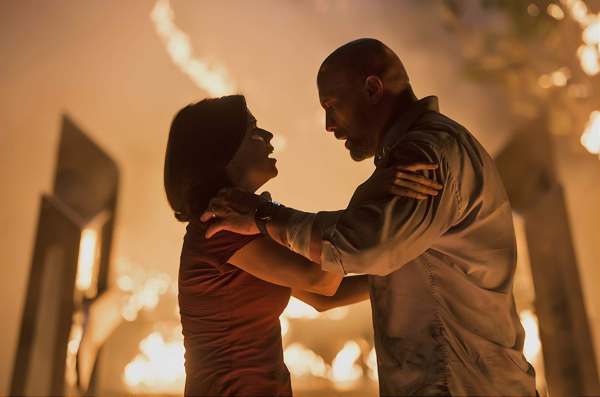 Dwayne Johnson plays the role Will Sawyer, a man who has lost his leg during a mission 10 years ago who has one sole mission which is to rescue his family from one of the tallest buildings in the world. Going into this film, I had no hope for this film and expected it to be pretty bad. Leaving the theatre I was absolutely shocked because I had so much fun with this movie. This film does deliver more than just cool action sequences and over the top scenes. The suspense is on point, and I was at the very edge of my seat throughout the entire film and felt for this character.

Dwayne Johnson does play the role you expect if you have seen other films he is in, not really giving a super unique role other than the fact that one of his legs is missing. Though Dwayne Johnson is a very likable actor that it didn’t really become a problem that it is the same role he has played before. The prosthetic leg is used creatively which I did like a lot making the prosthetic leg have a reason to be in the movie.

Neve Campbell gave an OKAY performance not really standing out and in reality could have been better for the film. The movie did not give much time to make me care for this character. The film almost expects the audience to already care only because she is the wife of Will Sawyer. This didn’t work, she came out as a basic character. The chemistry between both Will Sawyer and Sarah Sawyer was a basic MUST have in this film because we are supposed to care. It was OKAY, this film didn’t take the time to make their relationship important. In one way this benefited the film because it didn’t slow it down, but on the other hand, as stated before, the only reason to care for Neve Campbell’s character is that of her relationship. She did not show her love with Will Sawyer that much, but Dwayne Johnson definitely did, so it was a one-sided thing which did hurt the film a little.

Ng Chin Han was pretty good in the film. His performance is what you expect from him already though it does add on to the film and not drag it. The use of the character was on point, still being one of the important characters but keeping one of the side-plots lows that involved him.

We all know the plot for this film, and going in it is a little predictable and the trailers did not help. The trailers do in fact give a lot away, and I wish I never saw them because not only does it give away a lot of the film but also makes the movie look worse than what it really is. The plot works, and maybe in some sequences, it becomes a little unpredictable but for the most part, this film does not bring anything new to the table that will blow your mind.

This movie is around one hour and 50 minutes, and it felt like it was 30 minutes. This is a thrill ride, buckle up your seatbelt because this movie is like a roller coaster. Very fast paced, and I mean that in a good way, benefiting the film rather than hurting it. There is no moment in the movie where you are like, “Ugh, just get on with it!” This film is filled with good action and great suspense to keep you excited and pumped throughout the entire film.

The CGI is really good, there isn’t a scene where you are like, “Pfft, CGI is trash!” and the film does get you to feel the size of this building and when camera moves down to see the height of the building when the characters are high up, oh my god, it adds on to the stakes. The film has good shots, but there is nothing super unique that makes it different from other films.

In conclusion, this is a very fun movie that delivers in action. Going into this movie, it is good not to have your hopes high and expect an Oscar-worthy movie because it may damage your view of the film. It is a perfectly enjoyable over the top movie, is it a must see? No, not really. This is one of those films that you can sort of watch in your house while doing something and just take glances over at the cool sets and action sequences. Or a movie that will definitely entertain you for almost two hours if you’re bored. I had so much fun with this movie and will definitely rewatch it one day.