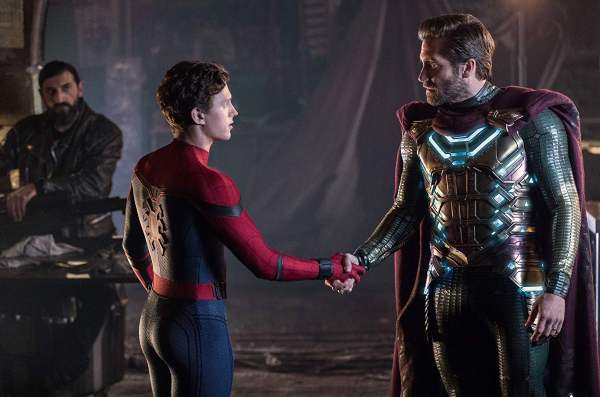 How do you follow Spider-Man: Into The Spider-Verse? Or more importantly, Avengers: Infinity War and Avengers: Endgame?

You send Peter Parker back to high school and stick him on a field trip with his closest friends, forcing him to juggle his power and responsibility as an Avenger with his quest for summer love and living  life with his classmates.

A lot has happened to Spider-Man over the 5+ years that have passed since the events of Captain America: Civil War, and before reading any further you should know that you are going to want to have seen all 22 films in the MCU (Marvel Cinematic Universe) that lead to Spider-Man: Far From Home in order to fully appreciate all of the moving parts in this EPIC conclusion to the Infinity Saga.

That’s right, many had thought Avengers: Endgame would be the fitting conclusion to 10+ years of superhero superiority, and though it certainly plays like the finale, Spider-Man: Far From Home provides the perfect epilogue. Endgame hits so hard that there is lots to unpack, leaving questions and speculation as to what happens after Thanos’ snap gets reversed and the world needs to move on. Far From Home finds just the right balance between establishing stakes that feel both world-ending and intimate given the characters involved, as well as developing Peter Parker’s story in true coming-of-age fashion as director Jon Watts is known to pull off.

Tom Holland returns as the most true-to-form high school Peter Parker and hero known as Spider-Man that has graced the big screen (in live-action, anyways). With him, his friends Ned Leeds (Jacob Batalon) and MJ (Peter’s love interest who gets the spotlight and shines thanks to Zendaya’s endearing performance) are along for the ride. Peter has suffered a lot between experiencing the ‘blip’ (what New York is calling the ‘snappening’ from Infinity War) and then returning to fight alongside all of the Avengers to defeat Thanos once and for all. Parker’s mentor Tony Stark died saving the universe, and he feels as though the torch has been passed down to Spider-Man to carry on the Avengers legacy. Iron Man’s absence is felt by the entire world and it shows. In the beginning, Peter wants to take a break from being a hero and just enjoy his summer on a class trip to Europe.

Nick Fury (reprised by Samuel L. Jackson) is scrambling trying to put together what Avengers the Earth has left in order to prepare for the next big threat, but Parker is avoiding his calls despite Happy Hogan’s (Jon Favreau, director of 2008’s Iron Man) warnings that you should not ‘ghost’ Fury. Happy is also taunting Peter with a romantic interest in his Aunt May (Marisa Tomei). Early on in the vacation, an attack occurs by a big water-based monster that starts terrorizing Venice. Spider-Man tries to stop him in street clothes, but just when it seemed he was overwhelmed a mysterious figure shows up to the fight and dispatches the creature with such mettle that it is clear that he has dealt with these types of threats before. Enter Mysterio (played masterfully by Jake Gyllenhaal), a name that was created by the media and seems to stick, who is working with Nick Fury to push these elemental threats back. This movie will shock and awe; and even if you think you have it all figured out, you really will ‘Marvel’ at its execution.

Mysterio claims to be from an alternate reality lending credibility to the multi-verse theory. There are definitely aspects to this movie that support the idea that multiple parallel realities exist, and audiences who have seen Into the Spider-Verse are already primed to embrace the idea. Spider-Man: Homecoming’s big turn heading into the final act hits you like a freight train, whereas Far From Home leans into certain narratives that you might expect only you are still blown away by its brazen display of AMAZING and SPECTACULAR feats. This is a Spider-Man, despite the MCU tech that has been inherited from the Godfather-of-it-all Tony Stark, that feels like it has been pulled right out of a comic book. Quentin Beck a.k.a. Mysterio is an intriguing character to say the least, and Gyllenhaal embodies the role perfectly. Remember to stay well past the credits as most MCU fans are so trained to do. Multi-Verse Confirmed?

The end of Homecoming teases a shot at Spidey becoming an Avenger, and Peter makes the choice to stay a Friendly Neighbourhood Spider-Man as he is not yet ready for the big leagues. Obviously Infinity War and Endgame elevate things drastically for the wall-crawler, however, Far From Home leaves you with a Spider-Man who has come into his own, fully capable of choosing to fill the Avenger’s shoes or perhaps to forge his own path. Not only is this both a Spider-Man sequel in the MCU and a denouement to the Infinity Saga, but it pays tribute to fans that have been around since the first one to hit the big screen, Sam Raimi’s Spider-Man (2002). Just as Avengers: Endgame left you satisfied with your time investment all the while teasing what’s next in the MCU, Spider-Man: Far From Home brings it home in a big way and offers many possible directions for the MCU to take in its next phase.

Far From Home is a must-see for any MCU or Spider-Man fan!