By Benjamin Wollmuth (Sibley, IA, US) 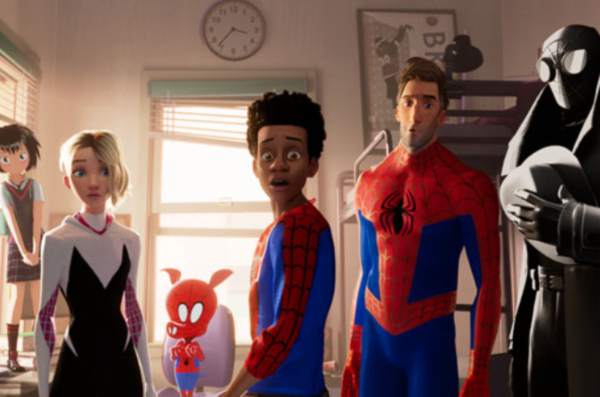 This is a bit different, however, because instead of skipping the learning and the suit making, we see his struggles firsthand. Miles makes a promise to his world’s original Spider-Man that he would put a stop to Kingpin, but he has no idea how to control his powers, so he has a hard time. Luckily, Kingpin’s fancy collider machine happens to bring in some other Spider-Man, as well, so that Miles can get the help that he needs. The best part about this film is the way the characters are handled. The writers understand the character of Spider-Man, no matter what dimension he/she is from. They all have different personalities and art styles that make them stand out from each other. They did such a great job that I now want to see spin-off films for all of the Spider-Men in this movie.

Into the Spider-Verse is a lighthearted film, and is able to mix seriousness with comedy for the perfect effect. From the comedy aspect, the film, as I said before, understands Spider-Man. He is a funny character and knows how to stay calm in any situation. He cracks goofy jokes and says witty one-liners. With this movie, the different personalities of the different Spider-Men mixing together brings the comedy. On the other hand, the serious family issues bring some conflict to different characters, but in order to keep this spoiler free, I will not go in depth.

There is one issue I have with the film, but it isn’t too big. Okay, the character is too big, but the issue is not. Kingpin, I feel, needed more characterization in order for me to think of him as a good villain. We learned some things about his family, but that was really it. He was a just a large man who wanted to conduct an evil plot. I can look past this, however, because the movie wasn’t really focused on Kingpin. It was more focused on the Spider-Men, and most importantly, Miles Morales. Since this was done so well, I can forgive the film the Kingpin issue. Spider-Man: Into the Spider-Verse was a film that was much needed on Sony’s part, because it shows that they still have good things they can do with the character. Animation, I feel, is the best format for Spider-Man, but that might be because I grew up watching the Spider-Man animated series.

Overall, this is an awesome film, and definitely deserves a watch. If you are a Spider-Man fan, I believe you will truly adore this movie as much as I did. If you are a heavy critic who doesn’t know much about the character of Spider-Man, I think you will enjoy this movie, too. If you just like movies in general, go out and see this movie. It’s worth it.