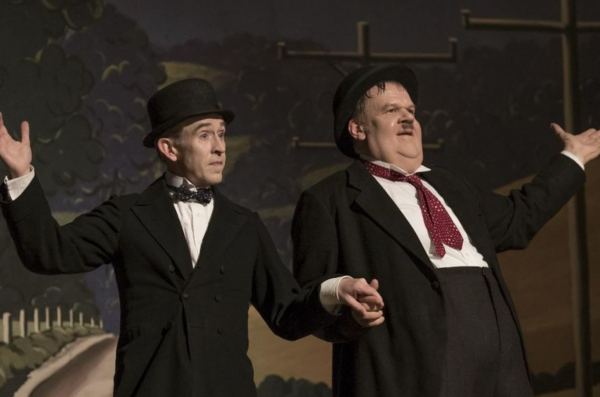 This film is about Laurel & Hardy’s final live tour of the UK & Ireland in 1953. I have seen it described in various ways as a true story, a biographical film and as a fictionalised account of their final tour. So, which is correct? First of all, let me say that the performances, and impressions, by the two lead actors Steve Coogan (Laurel) and John C. Reilly (Hardy) are first class, and you totally believe in them as the great comedy duo. The attention to detail in terms of the settings and scenery is also laudable, and successfully conveys the dreary, drab and grey nature of the early 1950s in the UK; a time when everyday items were still rationed (sweets ceased to be rationed in 1953, but bacon and other meats continued to be rationed until 1954) and the economy was still recovering from the expenditure of WW2. In fact, many historians believe that the UK was close to bankruptcy in the immediate post-war years. This depressed state of the country comes across very well in the film.

Laurel and Hardy, having been two of the most popular and biggest stars in the world have to contend with shabby hotel accommodation (although Stan’s room in the first Newcastle pub/hotel they stay in seems surprisingly big, given the rundown nature and size of the building from the outside) small performance venues and sparse audiences. There is also the issue of Ollie’s declining health which has an impact on the tour. The film also deals in flashback with their strained relationship with the film producer Hal Roach, and the fact that they were not being paid as much as they were worth. The point being that unlike Chaplin, Keaton, Lloyd etc. Laurel & Hardy at no point owned or produced their own films, and therefore made absolutely no money from re-showings and rentals to television. Had they have had ownership they, no doubt, would have been very rich men rather than in the poor financial straits they are in on this UK tour.

All of these aspects of the film seem reasonably truthful. The tour did happen in 1953, Hardy was in progressively ill health and they did play to very meagre audiences in the early parts of the tour. Where it starts to get a bit more like fiction, for me, is in the other main theme of the film, which is based on a supposed falling out between the pair when Hardy made a film without Laurel in 1939. This is referred to just as “The Elephant Film”, but its real title was Zenobia. As a fan of Laurel and Hardy, I have read several biographies of the pair and their film career, but this “falling-out” hardly gets a mention in those books. Which makes me wonder if it has been exaggerated for dramatic effect. When you read about them what comes across is that these guys were actually genuinely affectionate friends throughout their careers, unlike other comedy duos who had well-known bust-ups and stages of barely talking to each other.

Those bust-ups seemed to occur in particular when one member of the partnership feels they are doing more of the creative work (Abbot & Costello and Lewis & Martin immediately spring to mind) but not getting the recognition, or level of reward they felt was their due. But Laurel & Hardy were different. Time and again you read of how Hardy was perfectly happy for Laurel to earn more money, as the writer and gag developer, because Hardy didn’t want to devote the time to the creation process and would rather spend time pursuing his other interests such as playing golf, going to the horse races etc. But let’s be realistic here. Of course, there would have been disputes and occasional arguments in a partnership that lasted that long, but I am surprised if the particular falling out highlighted in Stan and Ollie was as big as made out in the film. Surely it would be better known if it was that important to them? Also, if Laurel was as devastated by Hardy making Zenobia back in 1939, wouldn’t he have been equally devastated by Hardy making The Fighting Kentuckian (with John Wayne) in 1949…just 4 years before the UK tour that is the subject of Stan & Ollie? And yet, The Fighting Kentuckian doesn’t even get a mention, just the “Elephant film”.

So, is the film fact or fiction? Well I think we have to bear in mind the somewhat inflated language used by film producers when referring to the source of their story. For example: “Based on a true story” = Fiction “Inspired by a true story” = Definitely fiction. “Mostly true” = An awful lot of fiction. Perhaps Stan & Ollie can best be described by using that awful word “Faction”. The other aspect of the film which was a bit disconcerting was when “Laurel and Hardyesque” situations are portrayed as occurring in real life. In particular a scene at a railway station where a mix-up as to which of them has got hold of a trunk, results in the said trunk sliding down a long flight of stairs. This seemed like a cheap trick, really. Of course, many performers feel they have to be “on” all the time, and will look to amuse any audience when they come across them, or when promoting their tours. But this rather incongruous scene smacks of suggesting the pair could be as inept and silly as their screen characters, when in fact they were obviously intelligent and very professional and well-seasoned performers.

By contrast, other scenes in the film portray the meticulous rehearsal and pin-point timing involved in some of the duo’s routines. Nevertheless, this is a film that is worth seeing because of the brilliant performances by the two lead actors. If you are a real Laurel & Hardy buff, you may take issue with the odd fact/scene, but if you can get beyond that then I think this a genuine attempt to show what touring is really like, and how uncomfortable it can be for stars who were hugely big and then fall on hard times and dwindling audiences. To my mind, their comedy has survived better than others of their era. Chaplin was undoubtedly a genius, and all film comedy owes him a tremendous debt. But his over-reliance on a sense of Victorian melodrama and pathos (and probably bathos – if I knew what that meant) can seem dated when viewed today.

Keaton is, rightfully, admired for his technical ability and stunts and the continuous dead-pan facial expression of his screen persona. But Laurel & Hardy’s comedy seems more timeless somehow. Maybe it is because their characters are innocents abroad, more lovable, or simply the fact that there were two of them that allowed for more variation? There was no obvious straight man, which I think was the real stroke of genius. Sometimes Laurel could be the superior one (think of the lighting the pipe with the thumb scene) and sometimes Hardy. Both of the characters were capable of coming up with good ideas, or solutions to their screen problems, it was usually in the execution of those plans that disaster struck. Chaplin and Keaton at their best, can still make me smile and appreciate their invention and comedy genius.

Laurel and Hardy at their best still make me laugh out loud, even if I am in an audience of one. I will end this piece with two more true stories from their career; one portrayed in the film and one, probably, largely unknown. When Laurel & Hardy arrived by liner in the port town of Cobh, County Cork, Ireland, in 1953 they were greeted by thousands of well-wishers on land and a huge flotilla of small boats accompanied the liner to its dock. As they began to disembark to rousing cheers, the local cathedral bells struck up their familiar theme song the Dance of the Cuckoos (a.k.a. The Cuckoo Waltz). According to Stan Laurel both he and Hardy were reduced to tears by that tumultuous welcome. The film does convey this very well, and what comes across is that genuine affection in which they were held by the public all over the world. The second story was relayed by a performer who worked with them on that final tour in 1953. His name was Ray Allen. That name is probably not known in the US but he was a very good ventriloquist (you really couldn’t see his lips move) who had an upper-class, drunken toff character, complete with monocle, as his dummy. A very good act in his heyday, but a young up and coming performer on that tour.

Many English theatres were originally built 100-200 years ago and the backstage areas can be very pokey, and rickety and full of spiral staircases. As a result, the bigger stars dressing rooms were the ones nearest to the stage, and the lesser performers were usually stuck up in tiny rooms on higher floors. Ray Allen was interviewed about working with Laurel and Hardy and said he couldn’t believe how gracious and charming they were, even to unknowns like him. After the last show at a particular venue, Allen was packing up his stuff in his backstage dressing room on the second floor when there was a knock on the door. He opened up the door to find Oliver Hardy there, who said. “Sorry to disturb you Ray, but Stan and I wondered if we might have your autograph.” The great Oliver Hardy, a huge star in very poor health, which particularly affected his legs, had climbed two flights of rickety stairs to get the autograph of a virtual unknown. How many big stars of today would be that gracious and that humble?

I don’t know if the film Stan & Ollie is right about the extent of the pair’s falling out over Hardy’s solo films. Maybe I don’t want to know? I like to think that they were the exception to the usual comedy duo rules, and maintained a genuine affection, love and friendship throughout their career. If that turns out to be a myth…I think I prefer to believe the myth. So, here’s to Stan and Ollie, there will never be a better, greater, or longer-lasting comedy duo.