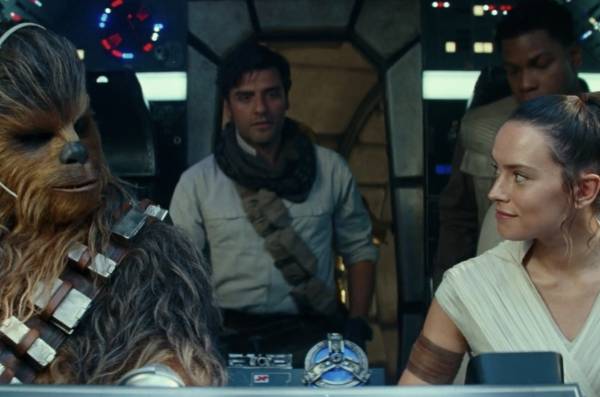 We close out year 2019 by finally-and I mean finally- saying goodbye to the Skywalker saga with hopefully a loud hurrah. Right? Well, not exactly. As you may have guessed by now, reviews have already been mixed about the latest Star Wars film, The Rise of Skywalker and I have to agree with them. I’ll do my best to state my case without any spoilers.

Let’s just get right to it. We start our story with Ren stealing a Sith wayfinder thingy with all the Sith haunting him including Sidious and Vader. It would have been so much cooler if they also used Plagueis but that wasn’t the case. Anyway, Ren meets up with Palpatine as he does his short monologue from Revenge of the Sith that should definitely wake up some fans. But that probably won’t be enough to stir up everyone’s confidence, especially after how disappointed fans were with The Last Jedi.

Rey is later seen training, Master Yoda style, with Princess Leia, who is also apparently a Jedi now, which might have actually made for a better standalone Star Wars film as the younger de-aged Princess Leia looks like a glossy, vaselined-up twenty-something. Anyhow, most watching the final chapter in the Skywalker saga will certainly get glimmers of nostalgia, that is if they can pick up on it without being reminded by their younger brother or older parent as the younger generation may not remember the original Star Wars films and the older generation may not care about the prequels.

While the film certainly has exhilarating action sequences, some of which were copied and pasted from maybe better Star Wars films, it undercuts its greatest strength that made people love Star Wars in the first place: the characters.

I’ll run through these examples without being portrayed as a cynical realist. Lando is on screen for ten or fifteen minutes, that is when he doesn’t have his helmet on; Leia is only there for emotional support before she–SPOILER ALERT– kicks the force bucket; Luke only does a walk-on for more moral support and a much better de-aged version of himself that actually looks so good I was almost convinced that they hired another actor for the part; a Kylo Ren that is being used more and more as a puppet with each sequel movie; and an Emperor Palpatine who could have drastically used more screen time–and skin softener.

J.J. Abrams tried his darndest to bring this saga to a close, but it seemed rushed for fans. For all appearances, the film is just gift-wrapped in holiday fashion for Christmastime, since that’s how all the new Star Wars movies decided to come out, with the exception of Solo.

People that hate this movie will be happy it’s over and people that love it will praise it’s nostalgia-filled vitriol, but the film may sadden rather than conclude and frustrate rather than entertain.