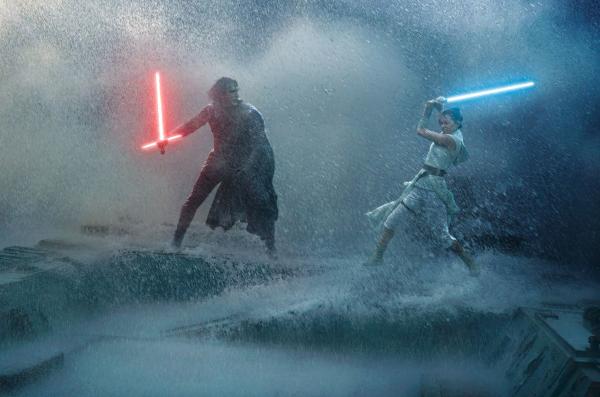 An enjoyable film; but not a good one. To some this statement may seem contradictory but I believe it sums up the feelings that will be felt by many upon watching this movie. Feelings of exhilaration and wild excitement at the sheer spectacle of the movie that was Star Wars Rise of Skywalker but also unshakable feelings of disappointment that this film could have been so much more. The first problem I have with the movie is that it feels as if it is rushing to get out of its own way to tell the story it really wants to tell, but as it has to begin from where Episode 8 left of it has to explain how it got there in the first place. As a result it begins very aggressively in terms of plot progression, which creates a feeling of pandemonium and confusion, giving the audience little time to connect and sympathise with the characters and story that is being presented to them.

This problem is prevalent throughout the movie and it means that many moments that feel as if they should be thought-provoking or even heart-wrenching just feel empty and invoke little to no emotion, keeping the audience constantly locked out and watching from afar rather than living and breathing in this movie alongside its characters, new and old, that they have come to love over the last 42 years. Another issue is in the minutia. As the saying goes, “The devil is in the detail” and in this movie this statement certainly rings true. The sheer amounts of pandering and attempts to suck up to the audience through nostalgia and fan service is incredible, and completely destroys the suspension of disbelief with this movie and certainly contributes to the feelings of detachment within it as well.

First of all, so frequent are the direct addresses made to plot holes and issues with previous movies, especially Episode 8, that it feels almost as if the writers went through every complaint made by a Star Wars fan on “Reddit”, and crammed them into the movie to shut us all up and make us happy. Not only do these stick out like a sore thumb and halt any idea of realism in the movie (if there ever was any in Star Wars), but alongside some pretty cringe worthy and stale acting, it creates some very clunky dialogue that results in any attempts at character progression within the movie, of which there isn’t much, feel like a chore to get through. There were several moments where I actually planted my face in my hands from the sheer lack of subtlety and nuance in the delivery of these plot hole rectifications.

Secondly the films reliance on nostalgia to sell tickets and keep fans happy, through bringing in actors and characters from the original trilogy to create excitement, distracts from the main story and development of the new main characters of the story. Although it is nice to see Lando Calrissian flying the millennium falcon alongside Chewbacca, it brings little to the film as a whole and just adds minutes onto the movie, which could be better spent elsewhere. Yet despite these clunky dialogue scenes and fan service moments bloating out the almost 3 hour film, it still feels rushed, as if this was meant to be two movies, but got condensed into one. This could be true as many speculate that director JJ Abrams wished to undo all the things Episode 8 had established, due to his contempt for it.

This meant that he had to essentially fit his version of Episode 8 and Episode 9 into this film in order to make the movie tie in with the previous films. Despite its attempts to explain away all the plot holes surrounding Episode 8, such as how Leia had force powers that allowed her to float in space, and why, if light-speed travel can destroy a fleet of star destroyers, have people not done it in previous movies, the film still manages to also create new plot holes and problems with the force, which I won’t detail due to spoilers, but I will say that one of them is about a new force power being introduced that could have been very useful in previous movies, which frustrates me not because it is another thing that they have introduced, but that the film does this while trying to undo all the things that Episode 8 introduced that were just as problematic to the lore of the universe as this is. However, not all these changes are negative as there were many things that Episode 8 introduced that needed addressing or changing in Episode 9 such as their outright disrespect to Luke Skywalker’s character, portraying him as a coward who would kill his own student (Ben Solo) because he showed a slight leaning to the dark side, after refusing to kill his father, Darth Vader who was a fully-fledged Sith, in Episode 6.

However despite 750 words, voicing my complaints of this movie, I personally really enjoyed it, and think there are some good things about the whole movie in general that also should be noted and applauded. First of all the cinematography is the best this franchise has ever seen, with the most recent developments in CGI creating beautiful panning shots of space filled with vast, exquisitely detailed worlds and environments. In addition to the CGI effects the set design itself also shows such immense attention to detail in the addition of little features in the background that you may not see in your first watch through such as the inclusion of Darth Vader’s shuttle in the ruined death star scene.

This creates some seriously good visual aesthetics that makes the universe feel real and tangible, even if the script and acting does not. The incredible visuals also contribute to and enhance the next aspect that I thought was done very well, the action sequences and set pieces, especially in light-saber combat, which is much improved from the laughable choreography of Episode 8. The action feels much more involved and holds some of the best moments in terms of sheer spectacle in the entire franchise; however despite the action being very well done, it is an aspect that becomes less and less enthralling with each time you watch it, meaning that without meaningful dialogue and story-line progression to accompany it, the movie becomes a series of diminishing returns, that resulted in me finding the movie almost tedious and boring on my second viewing, which was a great shame. However I am happy to report that the most consistently great facet of this herculean franchise has remained just as, if not more, impressive for this final instalment, the score.

John Williams, the composer for Star Wars, has once again given a master-class in how to supplement a movie to greater heights than it could have ever achieved on its own, encapsulating all its moments of nostalgia, wonder, surprise and even the few emotional and humorous scenes it has to offer, perfectly in his music, and he is possibly the only reason that the film was able to connect with me emotionally on any level. The final point that I wanted to talk about was that, despite many poor acting performances from the majority of the cast, I felt that both Ian McDiarmid and Adam Driver put in stellar performance for this movie that were my personal highlights. McDiarmid for his very unnerving and creepy demeanour playing Emperor Palpatine and Driver for his incredibly nuanced portrayal of Kylo Ren, which demonstrates his tortured and conflicted mind, torn between the light and dark sides, very effectively and makes him a very intriguing character for me.

This is further demonstrated in his force interactions with Rey, played by Daisy Ridley, which provide the most fascinating dialogue in the movie, due to the stark contrast between both characters. It also shows one of the few areas where JJ Abrams decided to take ideas proposed by Rian Johnson in Episode 8 and build upon them rather than break them down, and it is done to great effect and plays a pivotal role in the movie. Overall in conclusion I believe that Episode 9 is an enjoyable film, which shows great promise with stunning visual effects and set design to create a beautifully detailed universe coupled with a few stand-out acting performances, which make it a fun experience the first time around. However the style over substance approach, the rushed feeling of the film, and a plethora of other small issues, make it more tedious than enjoyable on repeat viewings after the initial excitement has worn off.

I can’t help but feel that if JJ Abrams had been in charge of Episode 8 and been able to dictate the direction of the whole story in his trilogy, telling it with sufficient build up and weight to create investment from the audience in the characters and plot, without having to compensate for Episode 8 instead, then this could have been an entirely different movie that I think would have been a lot better as a result. Make no mistake, this is by no means a bad movie, but it had the potential to be so much more and would have been had it not had to conform to the restraints placed in it by Episode 8, it possibly could have been a great movie.