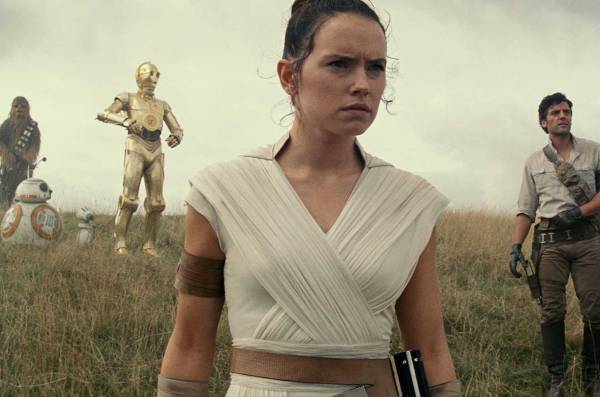 J.J. Abrams Sticks the Landing with The Rise of Skywalker

Director J.J. Abrams has delivered on closing out a trilogy that he started with Star Wars: Episode VII – The Force Awakens and wrapped up a IX-Episode Skywalker Saga (a trilogy of trilogies) that began with Star Wars in 1977.

Another trilogy of sorts has been laid out with the return of Emperor Palpatine. The Palpatine Trilogy consists of Episode III – Revenge of the Sith, Episode VI – Return of the Jedi, and Episode IX – The Rise of Skywalker (TROS). Of course anybody who has watched the teaser trailer for TROS knows that Lucasfilm is teasing the return of Emperor Palpatine who was defeated at the close of the original trilogy by none other than Darth Vader.

There is lots that has been set up in the past films that make it possible for the leaps and risks that this story takes, and watching the films that feature Palpatine prominently will help to make more sense of how the seemingly impossible unfolds in a new generation of the Star Wars galaxy.

Written by J.J. Abrams and Chris Terrio (writer of Argo, BvS, Justice League), this movie sacrifices exposition for high octane action and spectacle, but the visual story being told does not disappoint. The film looks incredible. There are great action sequences involving the fan-favourite Millennium Falcon and crew, intense lightsaber battles between Rey (Daisy Ridley) and Kylo Ren (Adam Driver), and hilarious adventures involving the other major players in this ensemble cast: John Boyega as Finn, Oscar Isaac as Poe Dameron, Mark Hamill as Luke Skywalker, and of course, archival footage of the late Carrie Fisher. That list barely scratches the surface as this film rocks a deep bench of great performances.

The film opens up with a crawl that advances the story significantly, announcing the return of Palpatine and placing the heroes and villains in a state of urgency. The Resistance is still trying to conjure up a Rebellion that can withstand The First Order, which we soon found out is about to be promoted to The Final Order, which is Palpatine’s endgame that he has been working towards in the shadows ever since he rose to power. The choice to reveal Palpatine’s return up top was necessary to move the plot along at a speed that accommodates all of the action set pieces that occupy majority of the film’s real estate, beautiful cinematography and special effects in all.

There are enough call backs the original trilogy that fit with the current narrative without feeling like cheap rehashes of the classic films. That being said, Star Wars is a franchise of echoes, so by design there are many familiarities in this chapter as well. The Dark places Abrams was able to take this story fit in line with the third instalments of the trilogies and the grand scale of it is fitting of an epic conclusion. One thing is clear regardless of how the bold choices of Episode IX land with the fan base, and that is each trilogy within the Skywalker saga has their own unique signature that is separated by a different generation. The originals have a classic Star Wars veneer to them, the prequels have a poetic Shakespearian quality to them mixed a children’s fable, and the sequel trilogy has a legacy vibe that pays homage to the originals while breaking new ground and adding new layers to the mythology.

The story kicks off with Finn, Poe, and friends on a mission in the Falcon to uncover information about the First Order’s plans. It turns out the rebels have 16 hours to stop a galaxy-wide assault from a secret fleet that Palpatine has been building, consisting largely of old star destroyers with new world-ending tech. Kylo Ren has been trying to hunt down this ghost of the Emperor since discovering his return in an effort to eliminate any threat to his supremacy. He encounters Palpatine and is seduced by the dark promise of power. Meanwhile, Rey has been training under Leia but has been unsuccessful in reaching out to the fallen Jedi of the past, including her former master Luke Skywalker. Once the team finds out about the Final Order, they embark on a mission to find a Sith wayfinder that will lead them to Palpatine.

Kylo and his Knights of Ren are determined to find Rey, and chase them to a desert planet where an ancient celebration (every 42 years, a nod to 1977) is happening with the locals. Rey begins to unlock the secrets of her parentage, as she gathers clues to the wayfinder left by a Jedi-hunter with Sith loyalties. The First Order catches up with the heroes, a battle ensues, and Chewie is captured and thought killed when a show of power between Rey and Kylo reveals Rey’s astonishing abilities. The team heads to planet Kijimi, where a known droidsmith named Babu Frik dwells helping spice runners. C-3P0 has an ancient Sith message that he is forbidden to translate, so his memory must be wiped  in order to translate the message. It is revealed that Poe used to be a spice runner when his old partner, Zorii Bliss (played by Keri Russell), tracks them down. Once the group has what they need, they need to leave, but Rey spots Kylo Ren’s star destroyer and senses Chewie is actually alive on it. Zorii gives her old crew mate a First Order captain’s chip which will help clear their landing on the ship. Finn and Poe go for Chewie while Rey searches for the Sith dagger she senses she will need to find the way finder.

Kylo and Rey fight each other over ‘Force skype’ in a spectacular sequence, and then take off for a moon of Endor where the Sith wayfinder is located inside the crash site of the Death Star. Here we meet some First Order defectors like Finn, led by Jannah (played by Naomi Ackie). Kylo catches up with Rey to intercept, and their final battle commences. As it turns out Palpatine has been pulling the strings all along. The revelations inside of this finale are pretty huge, but if you search your feelings they make sense within the framework of what has been established in the previous films. Rey’s power level, her connection to Kylo, and Palpatine’s involvement are all explained, although admittedly due to the fast-paced action-forward plot there is less time for exposition and is more of a show-don’t-tell type of story.

Overall, this is an epic conclusion to a trilogy, a 9-episode trilogy of trilogies, as well as The Palpatine Trilogy. The writing doesn’t lend to a clear understanding of the plot points, but the themes are set up throughout all nine films so that the conclusion works. It is a leap from where the story left off in The Force Awakens, but thankfully the character arcs established inside of The Last Jedi, especially between Rey and Kylo Ren, lead to a satisfying finish. There are pleasant cameos from OG’s such as Billy Dee Williams’ Lando Calrissian, and Ian McDiarmid’s return as Emperor Palpatine is truly menacing. You get a sense of resolution, however executed, as you stare off into the sunset. The action is some of the best we have seen in Star Wars, and there are enough story threads to keep you thinking after the credits roll. There’s definitely enough world-building to fuel future spinoffs, but the Skywalker Saga has effectively come to a close.

Episode IX – The Rise of Skywalker stays true to Star Wars and does not stop short on surprises and adventure. Skywalker Ranch will live on!