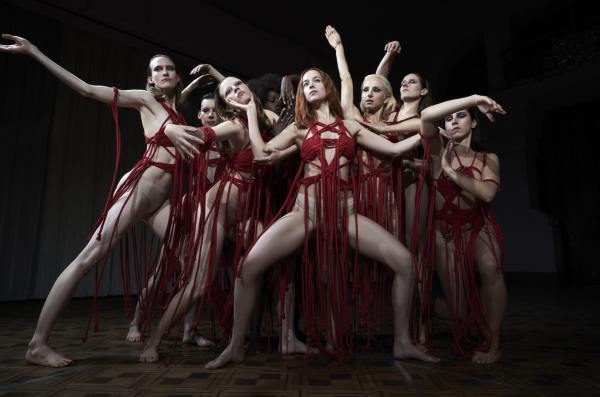 What will definitely be one of the most polarising films for 2018, this highly allegorical interpretation of Dario Argento’s seminal classic is the best kind of remake, one that respects its source but confidently sets about creating its own path and vision. Set in 1977 (when the original film came out), we are introduced to a grey, splintered Berlin, still burdened by the sins of WWII, while currently dealing with the Baader-Meinhof group, who are causing violent chaos around the city. Amongst this turmoil appears Patricia (Chloe Grace Moretz), who frantically makes her way to psychiatrist Josef Klemperer. A student at a prestigious dance academy, Patricia rambles on about her teachers possibly being witches, baffling Klemperer who thinks she must be suffering some kind of mental breakdown. Soon the seemingly terrified young woman has disappeared, leaving the elderly doctor wanting to know more.

The academy where Patricia has run away from, quickly accepts a new replacement, in the form of self-trained American Susie Bannion (Dakota Johnson), whose uninhibited audition attracts the attention of Madame Blanc (Tilda Swinton), who is one of the school’s head instructors. Blanc sees raw potential in Susie, who is filled with an untapped energy that her mentor wants to mould into something mysteriously specific. Befriending fellow student Sara (Mia Goth), Susie also forms a very unusual connection with Blanc, and the more time she spends in these hallowed halls, the more she seems convinced that something inexplicable is occurring in its darkened corners.

Suspiria 2018 has been met with divisive reviews worldwide, and one can certainly understand why. Argento’s version was the cinematic equivalent of a bolt of lightning, jolting our senses in ways moviegoers will never forget. The memorable use of sight and sound was extraordinary, and it was a spectacular achievement that the Italian director could never subsequently top. Luca Guadagnino, who helmed one of the best films last year, the Oscar winning Call Me By Your Name, wisely decides not to merely repeat what audiences have seen before, as Argento’s brilliant images (and Goblin’s unforgettable soundtrack) are impossible to replicate. Instead, he and screenwriter David Kajganich (who penned Guadagnino’s A Bigger Splash) aim for something more ambitious thematically, using the basic premise to explore the dark recesses of the human condition, and its frustrating propensity to be drawn to (or possessed by) particular ideologies and beliefs, keeping society in a cyclical loop of violent discord and segregation.

Nazism and the Baader-Meinhof incidents are used as clear references to symbolise mankind’s continual attraction to oppression, power, and violence, and there are parallels with modern day politics and conflicts that are sadly all-too-relevant. Guadagnino and Kajganich also examine a woman’s place within this aggressively patriarchal world, notably the doctrine and image they should adopt. There is a memorable scene showing, to darkly comic effect, the symbolic link between men and their weapons, while another horrifically conveys the way in which women have to twist and reform themselves to please male eyes and sensibilities.

While Guadagnino may not be trying to imitate Argento’s phantasmagorical color schemes, he and cinematographer Sayombhu Mukdeeprom (who lensed Miguel Gomes’ Arabian Nights trilogy and Apichatpong Weerasethakul’s Uncle Boonmee Who Can Recall His Past Lives) create their own striking look, filling their characters’ environment with haunting greys, while dotting it with tiny, meticulously placed fragments of color. Using these drained designs with minuscule traces of vibrancy to visually express the script’s subtext, Guadagnino does eventually let loose towards the end in no-holds-barred fashion, recalling Pier Paolo Pasolini’s extremely controversial parable Salo, or The 120 Days of Sodom (1975). A pub singalong disconcertingly echoes a chilling moment from Bob Fosse’s Cabaret (1972).

Shooting on 35mm film, and filled with era-specific technique, this looks like it could have been made in the 1970’s. Thom Yorke, from the group Radiohead, makes a very impressive feature film debut, concocting a music score that eerily accompanies the film-maker’s well-crafted images. Performances are excellent. Johnson, who floundered somewhat in Drew Goddard’s self-indulgent, excruciatingly derivative and overlong Bad Times at the El Royale, makes the most of her role here, skilfully balancing Susie’s quietness and uncertainness with outbursts of control and unbridled power. Swinton is, of course, superb, and it’s immense fun seeing her play multiple roles. Adding to the film’s 70’s dynamic is the casting of Angela Winkler (The Lost Honor of Katharina Blum; The Tin Drum) and especially Ingrid Craven (Tenderness of the Wolves; Fox and His Friends; Mother Kusters Goes to Heaven), both of whom are terrific.

I was definitely nervous before going in, as Argento’s highly influential classic is one of my all-time favourite films (and I savoured Synapse’s exquisite 4K restoration, which was released late last year), but Luca Guadagnino has, for me, defied the odds, taking a movie beloved by many and totally re-examining it, fusing his own, fresh ideas and themes to an already established framework. Those wanting a rehash of the original will be bitterly disappointed (and most likely bored), but for those who want something more challenging and thought-provoking, then Suspiria 2018 will be something to treasure.