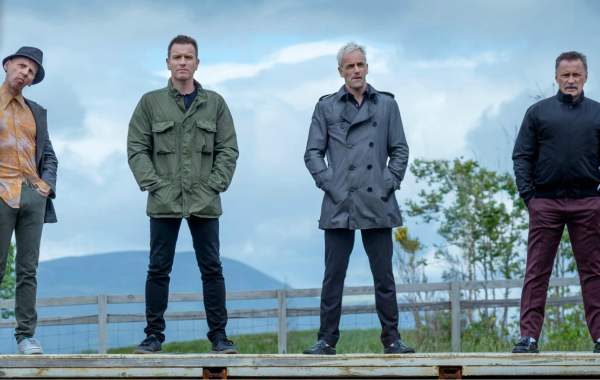 Reflectively mournful but also coursing with the kind of energy that made the original so immersive, the long-in-gestation T2: Trainspotting proves to be a highly satisfying follow-up, and should please the army of fans who may have been a little nervous about the prospect of a sequel to one of the greatest films of all-time.

It is twenty years later, and Mark Renton (Ewen McGregor) is coming home. Living in exile in Amsterdam after particular events that occurred two decades earlier, Renton decides to return to Edinburgh after suffering a health scare, and finds that some things have changed considerably. Visiting the family residence, Renton is welcomed back by his father (James Cosmo), even though a sadness hangs over the place as his mother never got to see him again before passing away. An abundance of time has flown by for Renton, and due to his reckless youth much of it seems wasted.

The rest of the group are also dealing with their largely self-inflicted problems. Spud (Ewen Bremner) is still a chronic heroin addict, and this chemical dependency has led to problems between his wife Gail (Shirley Henderson) and young son Fergus (played at various stages by Charlie Hardie and Kyle Fitzpatrick). Trying to conquer his demons in order to save his family, Spud feels like he is fighting a losing battle, one that is pushing him away from a normal life. Sick Boy (Johnny Lee Miller) runs his late Auntie’s failing pub, and is trying to maintain financial stability by awkwardly indulging in blackmail, secretly filming people having kinky sex with his maybe-girlfriend, Bulgarian immigrant Veronika (Anjela Nedyalkova).

Loose cannon Begbie (Robert Carlyle) has been incarcerated for the past twenty years, but his hatred for Renton remains passionately intact, and his unauthorised release will see the psychotic thug search for his friend-turned-nemesis. Begbie also wants to induct his teenage son Frank Jr. (Scot Greenan) into a life of crime, even if his offspring wants to pursue a career that is more viable and legal. With all the pieces in play, a confrontation between these familiar, now-older characters will inevitably take place.

The original Trainspotting was such a breath of fresh air, examining the impetuousness of youth with appropriately wild abandon, its characters not caring about the consequences of their actions or what the future may hold for them. When you are young, there seems all the time in the world to worry about these things later, and fused with an invincible attitude, makes any careless decision appear trivial and unimportant. Now in their mid-forties, everyone is painfully aware that this is not the case, and those choices have not only damaged their own possibilities, but also the lives of surrounding loved ones who trusted and cared for them.

Returning screenwriter John Hodge and director Boyle carefully develop a melancholic atmosphere, masterfully moving his characters between their current state of being with images taken from the 1996 film, making sure those clips mean much more than just gratuitous, crowd-pleasing nostalgia. We even get flashbacks of the group as schoolchildren, cleverly weaving a personal history where the outside world has eventually infected and moulded their feelings for one another. A fascinating aspect is how all this irresponsible, patriarchal behaviour has severed and distorted their view of, and interaction with, women. Whether it is Sick Boy’s possessive view of the much-younger Veronika, or how Begbie treats his oppressed wife June (Pauline Turner), there is an inability to approach the opposite sex in a respectful or equal manner. The brief sequence between Renton and Diane (Kelly MacDonald) is a telling one, indicating what might have happened if the former had gotten his act together. Only Spud wants to genuinely try and correct the mistakes of the past.

Boyle not only has these fictional characters thinking about the past and what could have been, but cleverly uses their journey as a way of asking us to look at ourselves and what we’ve achieved in that same time frame. It’s almost a collective experience for the audience, one that is achingly contemplative at times. This reaction will be pertinent to those of us who saw Trainspotting when it was first released, and it is the mark of a truly gifted film-maker who can make us feel this way. I even rued the fact that the cinema where I saw Trainspotting has long since closed down. Boyle’s exquisite ear for music remains, with some meticulously chosen songs (Radio Ga Ga by Queen and Relax by Frankie Goes to Hollywood are exceptionally well-used), while tracks from the original are employed to poignant effect. Visually Boyle is as inventive as ever, and working with Oscar-winning cinematographer Anthony Dod Mantle (28 Days Later, Slumdog Millionaire, Dredd), artfully form a number of memorable images. Despite the constant gloom however, there are moments filled with humour, some of which are laugh-out-loud funny.

The returning cast members all revel in bringing these memorable roles back to life, displaying an assured vitality that is noticeable throughout. What’s terrific is the absence of lazy sentimentality, with failings and betrayal still a part of each character’s nature. Nedyalkova, as the observant Veronika, certainly holds her own amongst all the male bonding and brawling.

T2: Trainspotting is a fitting sequel, and is a superb companion piece to the landmark 1996 film. Purposeful and thoughtful, Boyle and company have lovingly crafted a movie that may capture a current time and place as profoundly as Trainspotting did two decades ago, capped off with a final shot that is completely and utterly perfect.