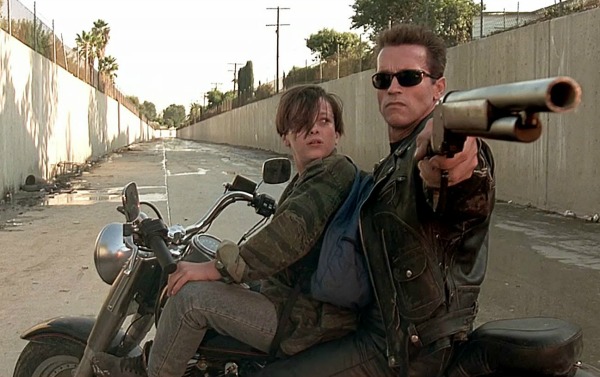 One of the greatest action films of all-time returns in 2017, lovingly restored and converted into 3D, and while the extra dimension may not feel completely necessary in the end, it does give movie-goers old and new the chance to see this ground-breaking epic the way it should be. On the big screen.

Going over the plot now seems almost redundant, but here we go. Set just over ten years after the events that occurred in the 1984 cult classic, we are quickly introduced (after a frenetic opening that superbly combines multiple effects techniques) to a new T-800 (Arnold Schwarzenegger), a cyborg sent from the future to track down 10 year-old John Connor (Edward Furlong), who will eventually become the leader of the human resistance against the all-powerful machines. However, this time the T-800 isn’t sent to eliminate the human target, but instead has been reprogrammed by the older Connor to protect his younger self.

Close behind is a prototype terminator, the T-1000 (Robert Patrick), constructed of liquid metal and who can change into various objects and people, making him even more relentless and terrifying than his predecessor. The other major player is Sarah Connor (Linda Hamilton), whose overwhelming obsession with what she knows about the future has landed her in a mental institution, overseen by Dr. Silberman (Earl Boen), the psychologist who questioned Kyle Reese in the original film. Maintaining an almost fanatical fitness regime, Sarah remains prepared for what is to come, and is desperate to escape so she can protect her son.

With the fate of mankind at stake, it is a race against time to see which side is victorious.

I remember cueing up for the first session, on the first day, in September of 1991 for Terminator 2 (now commonly called T2), and after the huge marketing campaign, to say expectations were high would be a massive understatement. The line went from the cinema entrance, through the foyer, down the stairs, and out onto the street. A scuffle even broke out ahead of me, as two young men aggressively argued about who was first in line. Both were ejected by security, so the physical debate proved to be utterly counter-productive.

Inside the theatre, what transpired over the next 137 minutes thrilled, excited, and exhausted everyone. Filled with action and cutting edge FX that we had never experienced before, T2 sent the audience out in a state of buoyant euphoria, aware they had witnessed something that was going to raise the bar for sci-fi/action cinema. Co-writer/producer/director James Cameron had played with computer generated technology before in The Abyss (1989), but with T2 he took CGI to a whole new level (thanks to ILM, Fantasy II, and effects wizard Dennis Muren), and the results again and again are truly spectacular.

What was a record budget at the time ($102 million) is effectively put up on the screen, but what is so terrific is the mix of practical and software effects. With today’s equivalent offerings saturated in CGI, all the crazy stunt work, prosthetics and animatronics here stand out considerably, making its fantasy elements appear more believable and tangible. The truck/motorcycle chase in the storm drain; the large-scale destruction at Cyberdyne laboratories; or the tanker/helicopter pursuit on the highway; these sequences still impress 26 years later, and one only laments at how much of these iconic moments would have been digitally created now.

The late, great Stan Winston, who worked with Cameron on both The Terminator and Aliens, once more showed what a master creator he was. He and his talented team made the impossible seem possible, with imaginative achievements that were continually outstanding. Returning crew members such as composer Brad Fiedel, cinematographer Adam Greenberg, and co-editor Mark Goldblatt, made sure this sequel was crafted to a perfect shine.

James Cameron used all the money given to him purposefully, and although some of the dialogue is below par (and the Pepsi advertising continues to stand out like a sore thumb), he did ensure that all the characters were properly defined and developed, a balance that is sorely missing from his more recent efforts, such as Titanic and Avatar. The stronger writing allowed the cast something meatier to grab onto. Schwarzenegger was perfect as the protective cyborg, while Hamilton excelled as a very different version of Sarah Connor. Patrick gave a star-making performance as the T-1000, while Joe Morton (as Miles Dyson), who made a strong impression in John Sayle’s wonderful deadpan sci-fi/comedy The Brother from Another Planet (1984), offered reliable support. Familiar faces such as Boen, Jenette Goldstein (Near Dark, Aliens, Lethal Weapon 2), and Xander Berkley (Heat, Gattaca, Taken) added to the fun. As a side note, I would also like to mention Robert Winley, who plays the cigar biker assaulted by Arnie near the start of the film. Winley has a rather unlucky track record, as he was also in Kathryn Bigelow’s masterful Near Dark (1987), as a bar patron who encounters a group of hungry vampires who visit the establishment he is drinking at.

What about the 3D? Since Cameron never framed or shot the film for the format, nothing really jumps out at you, so those expecting eye-popping results will be somewhat disappointed. However, it does allow you to fully appreciate the restoration work Cameron and company have done. There is a clarity throughout that makes you feel like you are back in the cinema in 1991, and the depth of the images are absolutely meticulous, dividing foreground and background with notable distinction.

Like Steven Spielberg’s Close Encounters of the Third Kind, which is also about to return to theatres fully restored, Terminator 2: Judgment Day 3D is a celebratory event, not only allowing longtime fans to revisit an old favourite on the big screen, but to give the new generation a chance to witness this classic the way James Cameron intended, instead of via comfortable repeat viewings on DVD, Blu-Ray, and TV.