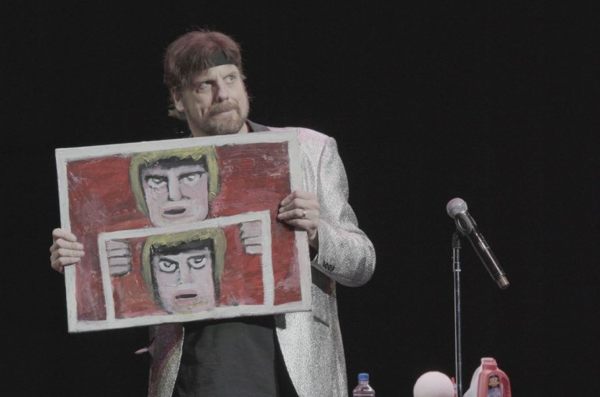 Going into this film, I assumed that this documentary would be much like most others out there. I assumed that this would be a simple story which delved into the successful past of the subject while focusing on the turmoil of the present. This documentary starts in just this way. The filmmaker, Ben Berman, starts by quickly going through The Amazing Johnathan’s successful career. While the success and joy of the past are solidly set as a backdrop, Berman then lets us know that Johnathan had been diagnosed with heart disease and that he was given only a year to live.

The filming of the documentary starts 3 years after this prognosis is given. For the next half hour or so, the film progresses as I had expected going in. Johnathan is bored. We experience his boredom as he wades through his pool with his pajamas on or as he sits in an empty room playing video games on VR. Things become more interesting as Johnathan explains that he used to be addicted to cocaine but eventually started using meth to kick the cocaine habit. Still the documentary shows flashes of his successful past while examining his somewhat troubled present.

Eventually, Johnathan decides that he can no longer sit around the house all day. He decides to go on another tour around the country.

At this point, the film becomes about the documentary teams stepping on each other’s toes and working to better the other by having the most original approach to the subject matter. In this way, the film reminds me of Icarus (2017) in that the subject changes halfway through the movie due to the happenings of the first half.

Things spiral more and more out of control as two more documentary crews who were apparently working on similar films before Berman get thrown into the mix. Berman tries to focus on the drug use, but continues to focus on the behind the scenes fight between the film crews as Johnathan tours the country with his comedy and illusions.

This interesting approach to a documentary would have alone made this documentary stand out but there is yet another twist which works its way into the documentary. It is brought up as a possibility as the film enters the final act that perhaps the Amazing Johnathan has been pulling the strings on everything the whole time. Credentials that Johnathan had brought up concerning one of the film crews is brought into question (a line of inquiry which is hilariously resolved in the end credits), Johnathan’s motivations for having all of the film crews is questions, and even the terminal disease is questioned.

While the film does have its faults, (one of which is a scene which feels forced where Berman sits outside by the pool after smoking meth with Johnathan where he without stating it verbally seems to feel regret for his decision to do so. While not something which takes the viewer out of the film, a scene that seems tacked on and tacky the substance of which could have been expressed better in my opinion.) Overall, this film is very engaging and interesting to watch. The approach and completed film will likely make this film a documentary classic which will be remembered for many years to come. Definitely look for this film come Oscar time.