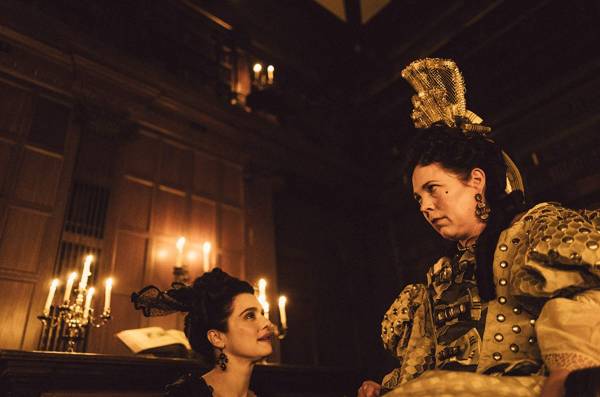 Yorgos Lanthimos’ (The Lobster) new film, The Favourite, is a comedy-drama period piece that stars Olivia Colman, Emma Stone, Rachel Weisz, and Nicholas Hoult. The film takes place in 18th century England where England is at war with France. The story features two cousins Lady Sarah (Weisz) and Abigail (Stone) who are competing against each other to win over the feeble Queen Anne (Colman) as her court favorite.

The major accomplishment of this film is the acting. Emma Stone and Rachel Weisz give off Oscar-worthy performances that will leave your jaw dropped, even after the movie is over. Olivia Colman was also excellent in this film making her one of the frontrunners for this year’s Academy Awards. Nicholas Hoult also gives his best performance since playing Nux in 2015’s Mad Max: Fury Road.

The screenplay, written by Deborah Davis and Tony McNamara, is fantastic. The story flows incredibly well and is rightfully nominated for Best Original Screenplay. The screenplay is also surprisingly hilarious. There were countless moments that I was gasping for air because I was laughing so hard. It has a very dark comedy style that I think a lot of film goers will enjoy.  One of the other positives for this film is the cinematography. The film is beautifully shot and shows the love and care Robbie Ryan (American Honey) has for his craft. It has very basic camera work, but it fits so well with the movie that I don’t mind it.

Another positive for this film is the costume and production design. You can easily tell how much time it took to give the look and feel of 18th century England. The last positive point of this film is the film editing. The editing of this film is flawless. There wasn’t a single scene that felt off due the editing, which is a very hard thing to do in a film. The scene transitions were great and made the movie flow very well.

There are very two small issues I have with this film. The first is the score, which feels basic. The score is very repetitive and feels off from the film. Some of the more serious scenes become disrupted from the music when two notes are blasted time and time again in a three-minute scene. The only other issue I had with this film was its length. The film felt like it could have added another 30 to 40 minutes to the story. This isn’t really an issue it’s more of just something I wish was in the film.

Overall, The Favourite is one of the best films of 2018. For this year’s Academy Awards, The Favourite leads in nominations with 10. It has been nominated for Best Picture, Director, Actress, two Supporting Actress awards, Cinematography, Original Screenplay, Costume Design, Production Design, and Film Editing. The Favourite deserves to win at least half of its nominations. This is one of those unique films that will become a classic in future and should be seen by everyone.