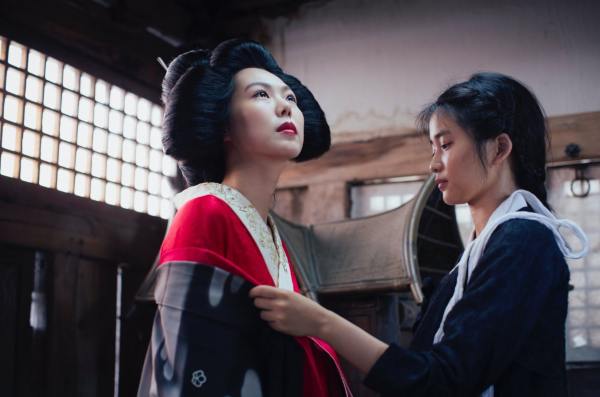 For all the visual opulence in Park Chan-wook’s The Handmaiden, a point is to be made through it.

The full frames mimic that of an oil-painting: soft, warm, sumptuous. However, if the film were to be an old portrait the pink rose petal lips of the protagonists simmer – smiling, letting their secrets barely breach the surface. However, once their quiet simmers boil over, their transgressions and secrets explode through the canvas, slapping the viewer in the face. This is The Handmaiden’s modus operandi. Park winks at the audience, as if to let us in on a secret, to let us know something is coming, that something big is going to happen. And once it comes, nothing is shied away from – everything that was once in the shadows bursts into the light.

There is nothing subtle about Park’s direction in this way. We, as the audience expect something to happen, and then it does. What draws us in is the how, the why, and especially the what. Many say the collective imagination is often more grand or disturbing than what a director could show or portray – I reject this in the case of Park and The Handmaiden.

The plot is a complex one, inspired by Sarah Waters’ 2002 novel, The Fingersmith, a Victorian story in which a handmaiden falls for her mistress. Park and co-writer Chung Seo-kyung take the basis of the story and set it in 1930’s Korea during the Japanese occupation, politicizing the already twisted love story. Two women already from different classes, different countries, and different ethnicities find each other in a Victorian home, each trying to dupe the other.

Lady Hideko, played by a wonderful Kim Min-hee, is the trapped, cynical, and frigid Japanese lady who has been trained by her Uncle Kouzuki (Cho Jin-woong) to read classic erotica to audiences so that he might sell fakes of the books and maintain the fortune of Hideko’s family – alongside a plan to marry his her. This all unravels once “Count” Fujiwara hatches a plan to marry Hideko, inherit her fortune, and then lock her in a madhouse. He enlists a famed pickpockets daughter Sook-Hee (Kim Tae-ri), to push Hideko into his arms so that all works out to plan – which of course it does not.

The Handmaiden involves love, lies, and deception amongst all four of these characters, and is split into three pieces to fully explore all. The audience initially follows Sook-Hee from the slums of Korea to the lavish and foreboding home of Lady Hideko and Kouzuki, coming to understand her developing lust and love her new mistress until the last moment the two see each other. Then we jump back in time for Lady Hideko’s perspective on the romance, learning that things were not what they seemed.

Initially, nothing is what it seems in this film. Appearances are deceiving. We see this most with Lady Hideko – she goes through multiple transformations throughout the film, and yet she changes very little. It is about how she is presented to the audience by Park. First naïve and stupid, then cool and frigid, then evil and conniving, then finally a hero. It is not only the characters and plot that peel backwards, revealing what truly lays underneath, the visuals match this trend.

The deep colors of wood, burgundy, and jade of the home in which the majority of the film takes place in are luscious. Grand oil portraits and cherry blossom trees litter the grounds, interiors and exteriors of the home. The library is full of well-loved valuable books. Expensive tapestries and curtains hang from the walls. The entire home is grand and beautiful – however it is a lie. It acts as a cage, trapping Hideko amongst the finery. The library is a lie – all of the expensive and rare books are fakes. The cherry blossom tree is a lie – it is not a symbol of hope and Hideko’s home of Japan – it is the tree her aunt hung herself from. The cherry blossom is a sign of death and despair. Above all else the gilded cage that Hideko sits in is a disguise – it sits upon a basement that houses the ugliest terrors known to man. The basement is what makes people go mad. This is alluded to from the moment Sook-Hee first arrives at the house. The rolling blackouts that the head maid explain to her are the first indications of evil within the house. The light does not shine there permanently. The evil is not expressed fully until later but Park hints at its presence from the beginning.

It’s Park’s attention to these details that allows a good script to transcend to a poetic masterpiece. There are symbols in every scene, every set, every character – symbols that also double down as hints.

This is not to say that The Handmaiden is all doom and gloom. It is far from it. One of the most striking things about the film is its use of comedy in the darkest moments of the film. In one instance, when Hideko attempts suicide vis-à-vis the same cherry blossom method of her aunt, and Sook-Hee saves her at the last moment, both act very cartoonish. They make funny faces, and even use physical comedy to pretend that Sook-Hee forgot about the fact that Hideko is hanging from her neck, and drops her for a moment. This is true in the more romantic scenes as well – in their first consummation of love, Sook-Hee sees Hideko’s bare nipple and exclaims, “it’s so cute!” in a baby voice. She then goes on to call Hideko’s nether regions “s-s-s-spellbindingly beautiful!” The entire love-making session is explicit and calls to mind the humor in real and true sex, by calling attention to the comedy of it.

Park gives the two women the depth needed to laugh together in the face of monsters, death, and rape.

Not to say that Park sticks solely to reality – he does in regards to his characters, but many elements of the film lay far outside the realistic with no explanation as to why or how. In these moments Park only gives us the what.

Once all comes to light, all bets are off. At no point does the sexual demonstrations that Lady Hideko performs with a wooden dummy seem unlikely. Nor does the sexual act with the bells – the bells of freedom- that the girls perform in the last moments of the film seem far-fetched. When we finally see what lurks at the depths of the basement it comes as a surprise, sure, but we do not doubt Park at this point. The traditional Japanese sexual torture device, that is a giant squid, fits in this world. As do the blue carbon monoxide cigarettes that cause instant death. We buy this heightened and poetic reality, regardless of how dark or fucked up it gets.

And we do not question Park – this director is so self-assured in the worlds and stories he creates that the audience never doubts him.

In The Handmaiden Park weaves together black comedy, melodrama, and fantasy together with sexual sadism, Korean history, and lesbianism to create an intricately textured silk cloth. Lies and truth transcend reality, giving us something else, something grand.