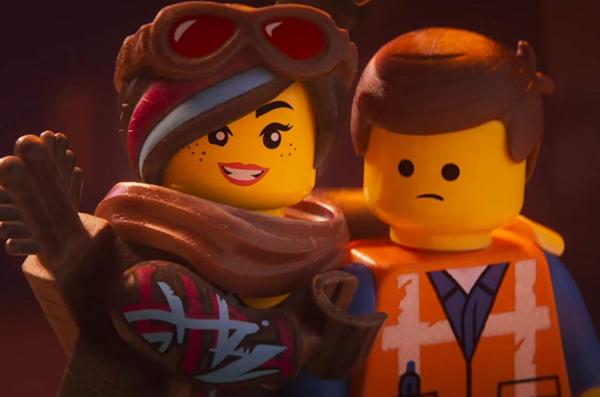 I have loved all three films in the Lego Movie franchise, the first Lego Movie, The Lego Batman Movie (my favourite) and even The Lego Ninjago Movie, it’s underrated for sure. So when I went to see The Lego Movie 2, I was ready for some good Lego fun. Sure I wasn’t expecting it to be as good as the original, most sequels aren’t, but I still expected to have a fun time.

Thankfully, the film did not disappoint. I found the voice cast and characters all lovable, and the new characters, mainly General Mayhem and Queen Watevra Wa’Nabi, happily slotted into my mind with the existing characters to make them more likable. The jokes were great too, referencing how many Batman films there have been, a song talking about all the actors that have played Batman, being self-aware that Batman had his own film and even a Bruce Willis cameo, 3 different Wonder Women and Rex Dangervest, a character that is literally an amalgamation of other roles played by Chris Pratt, who voices Rex alongside Emmet, including Star-Lord from the Marvel Cinematic Universe, Owen Grady from Jurassic World, Scott Hatteberg in Moneyball, Burt Macklin from Parks and Recreation and Joshua Faraday from the 2016 remake of The Magnificent Seven . Emmet was still as lovable as always, and his innocence made his jokes funnier. Wyldstyle was still great. Batman was still the standout. Unikitty was still adorable.

One area I feel this movie exceeds the first film in is the music. Whilst the first film had one signature song (Everything Is Awesome), this film decides to have more than 5 songs, and all of them are memorable considering how simple they sound on paper. The best of them all is ‘Catchy Song’, with its repeating line of ‘This songs gonna get stuck in your head’ and let me tell you, it does. This kind of makes the film feel more like a musical, possibly trying to attract more awards? Well that didn’t work, since it didn’t get nominated for the 2019 Oscars. Maybe next year? The ending was just as powerful and emotional as the first film, but I can’t say anything else otherwise it’ll go into spoilers.

For its problems, I feel the sequel is not as fresh as the original, despite having a script written by the original’s directors Phil Lord and Christopher Miller. Whilst having many pop culture references, including a line saying how good The Matrix is, I feel these are references adults or people that have seen those references in will understand, not the target audience of children. Some characters from the original weren’t as good, mainly Charlie Day’s spaceman Benny, who sounds less enthusiastic than the first film. The main villain isn’t revealed till the last 3rd, but the twist villain idea doesn’t work and the character who turns out to be the villain is not who you would expect, but very confusing. The plot starts simple enough, but gets too weird for my liking by the middle and continues like that till the end.

Overall, despite some flaws, I would recommend The Lego Movie 2 for its emotional depth, amazing soundtrack, great voice cast and characters and pretty much most other things. Everything is still awesome. Just a little less so than the original.