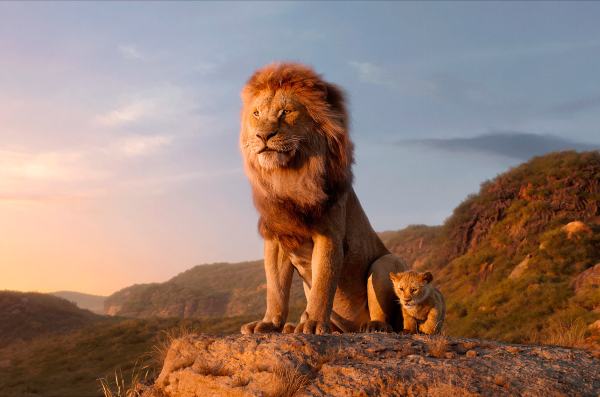 The Lion King Roars from the Top of Pride Rock!

25 years ago, The Lion King (a Disney animated classic) warmed the hearts of children everywhere. Jon Favreau was tasked with recapturing lightning in a bottle when he signed on to direct this year’s ‘live-action’ remake. I had my reservations, and even wondered why it was being billed as a live-action film when it appears to be mostly digital (albeit state-of-the-art) animation. Favreau has gone on record to explain that his vision is not so much a reimagining as it is a retelling of the same classic story in a much more modern (and in my opinion, visceral) medium, stating that his intention was for viewers to be able to say that they have “seen The Lion King“.

On that basis alone I think that it works, but I also feel that it does more for the classic tale than simply retell it. Audiences in 2019 are very used to excessive CGI being used in big summer blockbusters, but this is usually to convey special effects or spin fantasies that are otherwise too difficult or expensive to produce practically. The Lion King is virtually all digitally animated (save for one iconic shot of scenery that director Jon Favreau included in the film for artistic purposes), but the only thing that really tips you off is that the animals are talking- and we KNOW that animals don’t move their lips the way humans do nor do they speak English. This is a testament to how visually stunning this film is. Everything from the beautiful scenery down to every last bird and mouse included in the full roster of African wildlife is displayed in incredible detail.

For those who have not seen The Lion King – SPOILERS ahead. The story follows a young lion cub named Simba, who is the prince of the pride lands, destined to take over as king following his father Mufasa (voiced once again by the great James Earl Jones). Simba and his best friend Nala are fearless explorers who like to have their fun and get into trouble. Not everyone is happy under Mufasa’s rule, however, as his own brother Scar (voiced by Chiwetel Ejiofor) plots to take the throne for himself. Early on in the adventure, Mufasa warns Simba not to traipse beyond the land where the light touches (his kingdom) and into the shadows. Knowing how difficult it is for young Simba to resist exploring the dark elephant graveyard, Scar maliciously plants seeds of temptation in order to push the lion cubs into dangerous territory and thus placing himself that much closer to the throne.

Simba and Nala find themselves in trouble, surrounded by vicious hyenas (mostly vicious, save for two hilarious henchmen named  Kamari and Azizi voiced by Keegan-Michael Key and Eric Andre respectively). Mufasa arrives just in time, thanks to his trusted advisor Zazu (John Oliver), and saves the kids from certain death. Scar enters the elephant graveyard to forge an ‘unholy alliance’ with Shenzi (leader of the hyenas voiced by Florence Kasumba) and her rabid hyenas, revealing his intentions and motivation to the tune of ‘Be Prepared’. Realizing he is in trouble, Simba continues to take advice from his uncle Scar. This takes the journey into a gorge where Scar tells Simba he is to work on perfecting his lion’s roar (something that Scar urges is necessary for any king). The trap is sprung, as shortly after the hyenas are seen scaring a large stampede of wildebeests into the gorge right on top of Simba. Mufasa shows up once again to save his son only this time it costs him his life. Scar convinces a devastated Simba that it is all his fault and to run away as he will be held accountable by the rest of the pride.

The bulk of this hero’s journey consists of Simba meeting Timon & Pumbaa (Billy Eichner & Seth Rogen are hilarious as Simba’s carefree grub-gobbling companions), learning to move on from his father’s tragic demise through the mantra of ‘Hakuna Matata’ (it means no worries!), only to be reminded of his duty as heir apparent when Nala stumbles upon him in a desperate errand to find help (because Scar and his army of hyenas are running the pride lands into the ground). The musical vocals provided by Donald Glover and Beyoncé (as adult Simba and Nala) are enchanting, singing a duet with one another in ‘Can You Feel The Love Tonight’. The honeymoon phase ends abruptly when Nala realizes that Simba has no intention of returning to help save the pride from Scar’s rule. It takes some tricky words of wisdom from John Kani’s Rafiki (a wise monk-like monkey who held Mufasa’s trust) and an encounter with the spirit of Mufasa himself to convince Simba to catch up with Nala and return to restore the pride lands to its former glory.

The story may be a retread, but it has yet another excellent score from Hans Zimmer and a familiar soundtrack that has been reinvigorated. The photo-real quality of the digital animation is some of the best I’ve ever seen, and I understand now why this entry has been included among the live-action remakes of the Disney classics. The magic of film is effective in selling the visuals as realistic as possible, with an intensity in its action sequences that is usually reserved for live-action blockbusters. Jon Favreau has achieved something monumental in this retelling of The Lion King, which is less Gus Van Sant’s Psycho (1998) and more to the tune of Kenneth Branagh’s Cinderella (another Disney live-action remake from 2015). The emotional resonance (admittedly rooted in nostalgia) that carried throughout this film that features animal characters that aren’t as emotive in their expression as cartoon characters are able to be is astounding.

I highly recommend The Lion King (2019) to fans of the classic tale and newcomers alike!