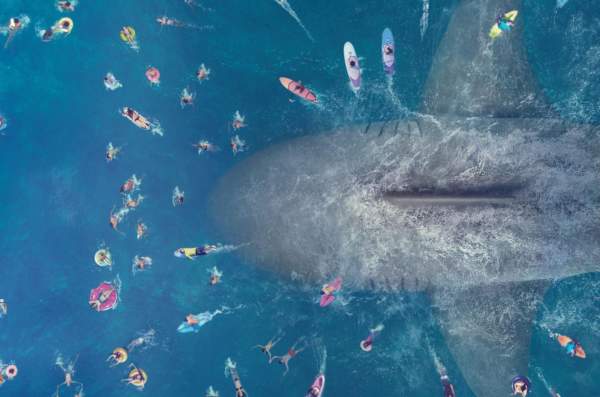 After enduring The Spy Who Dumped Me, which ran a mind-numbing 116 minutes, now along comes The Meg, a deliberately trashy killer shark adventure that runs an incredulous 113, weighing down and largely ruining what should be a fast-paced, exciting, and knowingly tongue-in-cheek thrill ride.

Opening in deep waters off the coast of the Philippines, we are introduced to navy rescue expert Jonas Taylor (Jason Statham), who along with two other colleagues, are in the middle of saving crew members trapped on a downed submarine. During this mission, they are hindered by something crashing against the outside of the sub, something which Jonas believes is alive, and very, very large. Unfortunately lives are lost, and Jonas’ claims that a large beast of some kind was responsible are laughed off by his superiors, and he is subsequently fired.

Cut to five years later, and the story now centres on a research crew who work on an elaborate, high-tech station, financed by Elon Musk-type billionaire Jack Morris (Rainn Wilson). In charge of the crew is Minway Zhang (Winston Chao), whose daughter Suyin (Li Bingbing) is the head biologist. Working alongside them are ‘Mac’ (Cliff Curtis), Jaxx (Ruby Rose), DJ (Page Kennedy), ‘The Wall’ (Olafur Darri Olafsson), Lori (Jessica McNamee), Toshi (Masi Oka), and finally Dr. Heller (Robert Taylor), who was on that fateful mission with Jonas five years before.

When a particular operation to explore the sea bed goes seriously wrong, with the submersible attacked by an unknown creature, ‘Mac’ and Minway convince Jonas to help, but in doing so he will have to face the massive shark that has left his life in a mess for so long. He and his terrified crew will also need to destroy it before it reaches the densely populated Chinese coast.

Loosely based on the novel by Steve Alten (which spawned seven sequels, so look out if this is a box-office smash), a movie version has been in the works since it was published in 1997. Moving from Disney, to New Line Cinema, and finally Warner Brothers, a number of names have been attached to the project, including Jan de Bont (Speed, The Haunting), Guillermo del Toro (The Shape of Water), and Eli Roth (the Hostel films), but the director that the studio eventually settled on was Jon Turteltaub (While You Were Sleeping, Instinct, the National Treasure films, Last Vegas). Not known for his kinetic skills or genre savvy, he seems like the wrong choice for a production such as this, and this sadly proves to be the case.

Turteltaub never appears to comprehend the rhythm and tone required for a feature such as this, and early on allows the film to bog down on unnecessary details and scenes. The rescue mission that Jonas is talked into carrying out (as well as the scenes leading up to the research colleagues becoming stranded) is needlessly prolonged, draining any kind of suspense and danger. But then, after the rescue has been completed, Turteltaub brings the whole film to a screeching halt, dwelling on repetitive exposition, high school dramatics, and utterly risible dialogue for what seems like forever. There is no efficient use of screen time, and patience has been well-and-truly tested when Jonas and company finally reach the surface to try and stop the shark from terrorising hundreds of swimmers. The initial destruction of boats by the beast is ludicrously never shown.

The script is a mess, changing Alten’s novel considerably, stripping away any kind of characterisation and story cohesion, and like Turteltaub, seems to be taking the entire scenario a little too seriously. It also liberally borrows from a slew of other films, including Jaws, Jaws 2, Jaws 3, Cliffhanger, The Abyss, and the recent Piranha remake.

The cast are left high and dry (so to speak), with basically nothing to work with, and no chance to project a sense of theme park-style fun towards the audience. Statham is completely wooden as Jonas, and makes for a dreary hero indeed. Someone like Kurt Russell, Woody Harrelson, or Colin Farrell could have brought so much more personality and humour to the role.

Faring better is Bingbing (A World Without Thieves, Dragon Squad, The Message, The Forbidden Kingdom), who amazingly manages to rise above the material to deliver a reasonably likeable performance, even though some of the dramatic scenes she has to appear in are embarrassingly corny. Also okay is Shuya Sophia Cai, who falls on the right side of adorable as Suyin’s precocious eight year-old daughter.

No-one else is able to make an impression (which includes talented New Zealand actor Cliff Curtis), viewed by the screenwriters as nothing more than potential food for the shark. Olafsson has the dubious honour of being in both this and The Spy Who Dumped Me.

The effects vary wildly, ranging from convincing to video game-like, and the obviously tame, PG-13 approach extinguishes the visceral kick this kind of picture needs. Director Ronny Yu (Freddy vs Jason, The Bride With White Hair), or Paul Verhoeven (Starship Troopers, Robocop) would have lovingly played this to the hilt.

The Meg is a huge disappointment, never hitting that perfect wavelength, which would have seen it deliver as a rip-roaring crowd-pleaser, giving moviegoers plenty of excitement and smartly crafted laughs. What we have instead is the complete opposite; a slowly-paced, po-faced adventure that easily outstays its welcome, made by people who just seem unaware of the possibilities the concept has. It has intermittently decent effects (some of which would look quite good in 3D on the big IMAX screen), and a couple of amiable performances. Roger Corman however definitely wouldn’t have needed $150 million to make something infinitely more entertaining.