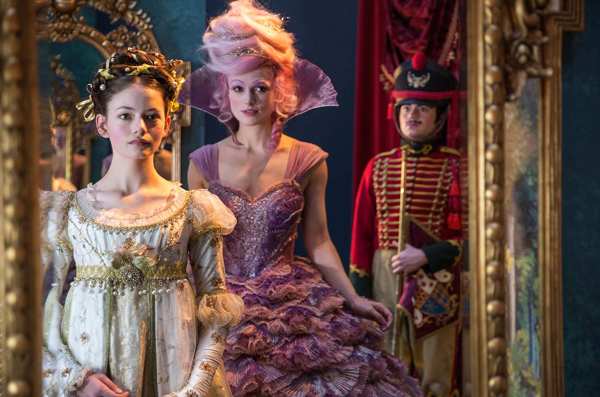 In recent years, we have seen the Walt Disney company arguably stray away from its humble beginnings, abandoning the original animated classic in favour of live-action remakes of their recognised properties, and any scheduled animated films are now intended to be sequels to their already popular projects. However, they do sometimes try and uphold the basis for their company’s creation, which was to invigorate childhood wonder and imagination in the theatre-going audience, presenting something new and yet warmly familiar. In this case this attempt falls under the title of The Nutcracker and The Four Realms (dir. Lasse Hallstrom and Joe Johnston).

Based on both the classic fairy story by E.T.A. Hoffman and the arguably even more iconic ballet composed by Ilyich Tchaikovsky, the film presents a supposedly unique spin on the fantastical story – one that unfortunately recalls the tone and message of Tim Burton’s Alice in Wonderland from 2010. Making The Nutcracker the third or fourth childhood property that Disney had inadvertently transformed into a poor man’s version of The Lord of the Rings. The film follows a young girl named Clara (played by Mackenzie Foy), who is unable to enjoy the festivities of the Christmas season due to the recent death of her beloved mother, as well as the cold attitude of her mourning father. After going to a Christmas party held by her eccentric godfather Drosslemeyer (played by Morgan Freeman), Clara finds herself being drawn into another world, one overrun with snowflakes, mice and boiled sweets.

From the beginning of the film alone, the comparisons between this film and Burton’s Wonderland franchise are overt. Like Alice, Clara mourns for the only parental unit in her life who actually cared for and understood her, her mother, who like Clara was a rebellious and creative young woman. Clara also finds herself being drawn into an epic battle between the titular four realms, making her question both what is important and what is needed, in a similar story arc to that of Alice as she contemplates slaying the Jabberwocky for the betterment of Wonderland. And sadly the comparisons continue throughout the film, with many often not being limited to the story alone.

Like the Wonderland films, this film boasts an impressive cast of Hollywood darlings, from Helen Mirren to Richard E. Grant. But sadly very few of them are given the screen time needed to make their characters memorable, Mirren’s Mother Ginger makes a staggering three appearances and Grant’s icy character can barely be labelled under the supporting cast. The only cast member who is given screen time in droves is Kiera Knightly in the role of the Sugarplum Fairy. Although her performance is sometimes a little stale, her high pitched voice and childhood wonder come across as slightly unnerving, especially when being dispelled from the mouth of such a mature woman.

A special shout out should also be given to ballet dancer Misty Copeland, who appears in the film for a brief dance sequence masquerading as exposition about the primary fantasy world. In what is probably one of the more visually striking sequences in the film, Copeland performs her choreography with grace and beauty, proving why she is one of the most celebrated dancers working in the world today. The film as a whole is of course beautiful to look at, like most of the Disney live-action fair. From Drosslemeyer’s scarlet ballroom, to the forbidden Fourth Realm, with its dilapidated circus theme, the film does gift the audience with some gorgeous visuals, which sadly don’t apologise for the lack of story or character development.

The film does choose to utilise the music of the iconic ballet, but only a few rare scenes where the score does not really align with the actions or emotions being conveyed on screen, making me wish that they had simply allowed composer James Newton Howard the time to develop a fully realised score for the film. Overall, The Nutcracker and The Four Realms is the film equivalent of a shop bought Christmas trifle – it may look beautiful, but very little lies beneath the surface and you’ll only want to enjoy it once a year.